The AUD/USD pair went from a fresh 4-month high to 0.7393, to a 3-week low of 0.7191, driven exclusively by trade war back and forth. The pair gapped higher at the weekly opening after the G-20 meeting ended with a 90-day truce between the US and China. However, the developments through the week pointed out the multiple hard to solve differences between both economies, cooling down hopes for an easy way out. Not only US President Trump called himself a "tariff man," but also Canada detained Huawei CFO for his extradition to the US, ragging Beijing. Worldwide equities collapsed, with speculative interest also spooked by plummeting yields, on fears the US economy is getting closer to a recession. Indeed, macroeconomic data denies this last, but the market as an entity is not always the smartest cookie in the jar.

The Reserve Bank of Australia met this week, and as largely expected, left the official interest rate on hold at a record low of 1.5%. The last time the RBA moved rates was a cut, in August 2016.  This latest meeting didn't change the view that the Australian Central Bank will remain on hold, at least until early 2020. Adding fuel to the fire, RBA's Deputy Governor Debelle spoke mid-week, saying that an interest rate is "some way off" and that a rate cut is not out of the table if economic conditions deteriorate. Furthermore, he added that policymakers are in "uncharted territory" when responding to falling house prices, pretty much saying they are hoping for things to improve on their own. True, the US Federal Reserve has sharply downgraded its aggressive stance in monetary policy, but surely remains two steps ahead of the RBA.

Australian AIG indexes for November showed that business activity remains weak, as the Construction index eased to 44.5, while the Manufacturing sector expanded at a slower pace, scoring 51.3. The positive note came from the Services Index, up in the month to 55.1 from 51.1 in October.

China will kick-start next week releasing trade balance and inflation data and will end it with retail sales and industrial production figures, more likely to affect the AUD/USD pair than any local figure.

The positive momentum of the weekly opening has been erased and the pair is back to neutral in the weekly chart, barely holding around a bearish 20 SMA and far below the larger ones, as technical indicators hover around their midlines with uneven strength. The pair is bearish in the daily chart after falling for five consecutive days after hitting the mentioned high. Technical readings in this last chart are anticipating more declines ahead, as the pair is poised to finish the week below its 100 DMA after nearing the 200 DMA at the beginning of the week and breaking below the 20 DMA, this last the only directionless one, with the larger ones still bearish. Technical indicators in the mentioned chart have entered negative ground and while their downward momentum is limited, there are no signs of bullish interest. The 0.7250 level is the immediate resistance ahead of a stronger one at 0.7300. Below 0.7170, on the other hand, bears will take the lead, with room then to send the pair down to 0.7100, en route to 0.7029, the yearly low. 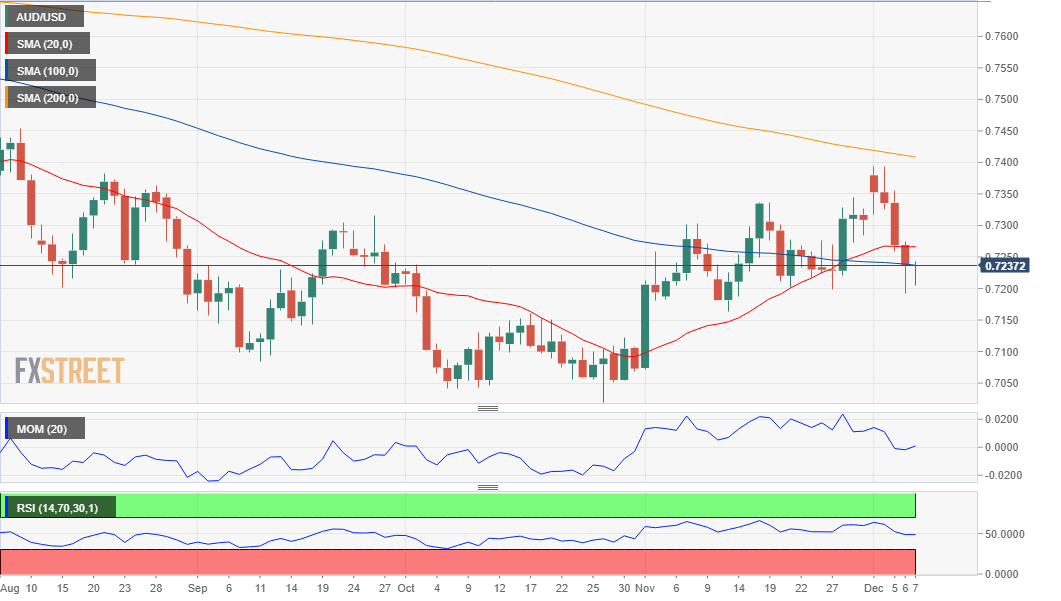 According to the FXStreet Forecast Poll, the pair can extend its decline next week but then recover. Bears account for the 64% in the weekly perspective, decreasing to 30% in the monthly one, as the 0.7000 psychological barrier weighs. In fact, most banks maintain a strongly bullish perspective while traders are the less confident on a  steeper recovery in the longer run. There are no fireworks ahead, with a whopping number of polled experts confining the pair to a  300 pips' range.

The Overview chart, however, shows that the risk has turned lower, with the weekly and monthly moving averages losing their bullish slopes. The bearish case seems firmer in the shorter term. For the long run, however, the neutral stance persists as there's a wide range of possible targets between 0.67 and 0.78.