The Aussie tumbled this past week, plummeting against the American dollar, in spite of some usually bullish factors for the commodity-linked currency.

The financial world was all about Middle-East tensions this past week, with the greenback rallying against the AUD in different risk-related scenarios. The risk sentiment was off at the beginning of the week amid fears Iran will revenge the killing of Suleimani and it actually did mid-week, launching a missile attack on US facilities, exacerbating concerns. Most markets experienced a sharp U-turn afterward, as both parts cooled down expectations of an escalation, resulting in Wall Street soaring to all-time highs.

The gold hit a six-year high on demand for safe-haven assets, usually providing support to the AUD. Rallying equities are also supportive, not to mention an ebbing trade war. Still, the AUD/USD pair remained under selling pressure, only recovering modestly early Friday, ahead of the US Nonfarm Payroll report. The pair was unable to recover the 0.6900 level, in spite of a dismal employment report.

Chinese data in the spotlight

Australia data was better-than-anticipated but failed to impress. The AIG Performance of Manufacturing Index came in at 48.3 in December, while the trade balance surplus rose, although less than expected. Retail Sales were also upbeat, up by 0.9% in November. Chinese figures, on the other hand, were tepid, as services output remained within expansion levels but below the previous readings, while inflation remained flat monthly basis.

The macroeconomic calendar will be a bit more entertained at the beginning of the week, as, on Monday, Australia will release December TD Securities inflation figures, while on Tuesday, China will reveal its latest Trade Balance data. Throughout the rest of the week, Australia will only release minor housing-related reports, but on Friday, China will publish its Q4 Gross Domestic Product, December Industrial Production, and Retail Sales.

Also next week, China and the US will sign in Washington phase one of the trade deal, although no shocker is expected to come from it.

The AUD/USD pair edged lower for a second consecutive week after failing to recover beyond 0.7000, quite a discouraging sign for bulls. The pair, however, remains above the long-term descendant trend line coming from 2018 high, and above a mild bullish 20 SMA, this last at around 0.6840, providing dynamic support. The 100 SMA retains its strong bearish slope far above the current level, while technical indicators turned south, the Momentum within positive levels, yet the RSI already at 50, reflecting the increasing selling interest.

Daily basis, the pair is below its 20 and 200 DMA, but above the 100 SMA, while the Momentum indicator is neutral around its mid-line. The RSI is recovering, but still within negative ground, all of which suggests that buyers are not interested. 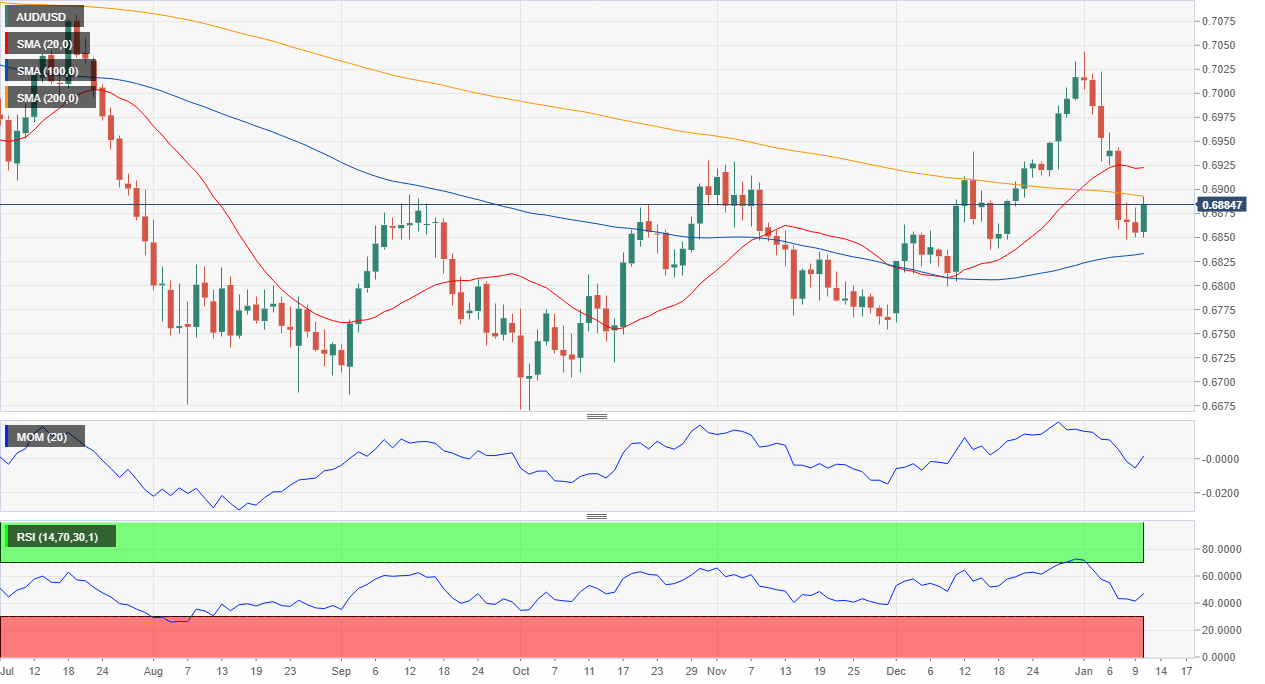 The FXStreet Forecast Poll suggests that, while speculative interest is expecting the current correction to continue, the long-term bearish trend is on the downside. Bulls are a majority weekly basis, aiming for a retest of 0.6900, but bears dominate the monthly and quarterly perspectives.

The Overview chart, however, shows quite a dispersion of targets even in the weekly case. For the longer term, the pair is seen in a whopping 900 pips range, with some betting on a rally to 0.74 and other to a slide toward 0.65. Both extremes seem to wild. The moving averages in the three time-frame under study, offer a neutral-to-bearish stance that suggests that, at the time being, speculative interest is more inclined to bet on the greenback.