The absence of relevant data coming from Asia kept the AUD/USD pair ranging for most of these last few days, although it ended IT on a sour note at around 0.6750. The Aussie began losing ground Thursday, falling alongside with Wall Street, as a relatively  “hawkish” Fed, opposed to dismal US data, suggest that US policymakers are not concerned about a possible recession, neither willing to take aggressive measures related to monetary policy.

The Reserve Bank of Australia released the Minutes of its July meeting, which showed that policymakers remain stick to the easing path. Not only they left doors open for additional rate cuts, but the board also review the use of unconventional monetary policy measures by other countries, hinting that quantitative easing is also in the table for the near future. Australia also released the Commonwealth Bank Services PMI, which contracted to 49.2 in August, according to preliminary estimates, missing the market’s expectation of 51.8. The Manufacturing Index came in at 51.3, better than the 51.0 forecast but below the previous 51.6 Finally, the Composite PMI came in at 49.5, well below the expected 51.5.

In the US, the Fed also released the Minutes of its latest meeting, which were seen as hawkish as Powell & Co. said that the latest rate cut was a “mid-cycle adjustment,” somehow hinting they would take it easy despite signs of a possible recession.

In the trade war front, the market was mildly optimistic as, at the beginning of the week, US President Trump spoke about “progress.” The good mood prevailed until Friday when hell broke loose. Firstly, China announced it’s planning new tariffs rates of between 5% to 10% to be applied to about $75 billion worth of US goods, that would take effect on September 1st. Following such headline, US Federal Reserve Head, Jerome Powell, delivered prepared remarks at the Jackson Hole Symposium, without giving real hints on what policymakers are planning for September, although he once again said that the US economy is in a good place and that the only risks are related to slowing global growth and trade policy uncertainty, adding that inflation is “moving back up closer to our symmetric 2 percent objective.”

US President Trump reacted to both headlines with a torrent of tweets, saying that Powell is worse for the US economy that Chinese President Xi-Jinping, later adding that he will be responding to China’s tariffs in the afternoon.  The market run for safety and away from the greenback. The AUD/USD pair, however, remained mute, trapped between the dollar’s weakness and Wall Street’s collapse.

These upcoming days, Australia has scheduled minor macroeconomic data, which means that sentiment will keep on leading the way.

The AUD/USD pair is ending with losses at around 0.6750, under pressure for a fifth consecutive week, firmly bearish according to technical readings, as in such a time-frame, it continues developing below all of its moving averages, with the 20 DMA maintaining its downward slope over 200 pips above the current level. Technical indicators remain within negative levels, with the RSI further extending its decline, currently at 34.

In the daily chart, a bearish 20 DMA capped advances throughout the second half of the week, and while the Momentum indicator recovered, it remains below its 100 level. The RSI indicator, on the other hand, has turned back south, currently at around 36.

The pair has bottomed twice this last weeks at 0.6735, the immediate support, en route to 0.6690. Once below this last, the 0.6600 figure comes as the next possible bearish target. Sellers are aligned between 0.6800 and 0.6830, which means that the pair would need to surpass this last to correct higher. Stronger selling interest will likely surge on an approach to the 0.7000 figure. 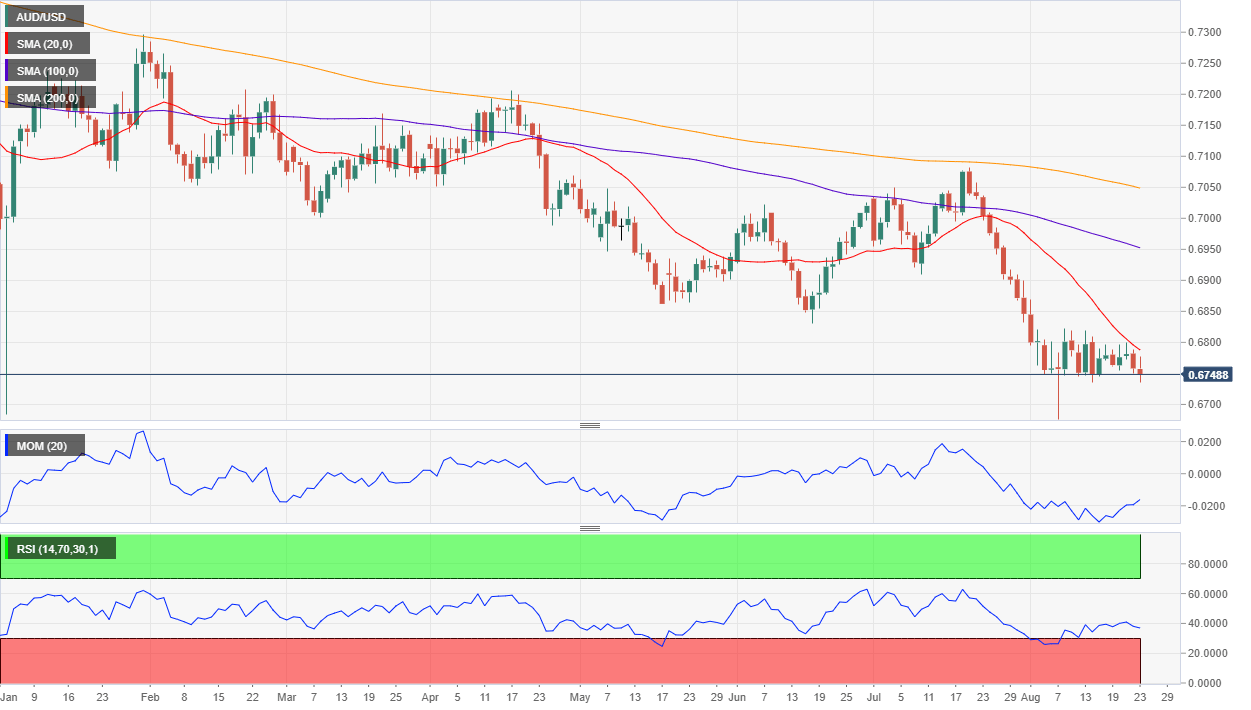 The FXStreet Forecast Poll indicates that bears convictions decreased in time, although the pair is hardly seen posting a relevant recovery, as, in the three-month perspective, the average target comes at 0.6829. Bears, however, account for 73% of the polled experts in the weekly view, in line with technical readings and the fundamental background.

GBP/USD Forecast: Ready to retreat? Johnson's optimism and Trump's tirades may have gone too far