The document showed that policymakers are concerned that additional rate cuts might backfire by denting consumer sentiment.  The Minutes of the latest monetary policy meeting indicated that low rates are also a concern in regards to the housing sector, as property prices might be overly inflated. That said, a rate cut is out of the table but also are hikes, amid stagnated progress in wages’ growth.

Australian data was generally discouraging, although hopes that the US and China may reach a trade agreement kept the downside limited for the pair, providing a reason to buy the Aussie. The latest news indicate that both economies are confident they could roll back tariffs in phases once a deal is reached. There are some tensions surrounding talks, as both economies seem to be escalating demands to take the most out of the deal.

This Friday, a White House Spokesman said that the US is “very, very optimistic” about reaching a trade deal with China. Ahead of London’s close, however, there were news making the rounds that US President Trump has yet to decide on levies.

Next Thursday, Australia will release November Consumer Inflation Expectations, foreseen at 3.2% from 3.6% previously, and October employment data. The economy is expected to have added 15K new jobs, while the unemployment rate is seen ticking higher to 5.3%. Also, on Thursday, China will release October Industrial Production and Retails Sales.

The AUD/USD pair has trimmed half of the previous weekly gains, technically neutral in the weekly chart, with an increased risk of turning south. The price is barely resting above a flat 20 SMA, while technical indicators hover around their midlines, lacking clear directional strength. The pair has falsely broken the neckline of a double bottom figure, now hovering around it. There are still chances that the figure could develop, although such chances would decrease on a break below 0.6840, the immediate support.

In the daily chart, the pair is holding above its 20 and 100 DMA, with the shorter one about to cross above the larger one, although the price is quite close to it, while technical indicators maintain strong bearish slopes, suggesting that the pair could extend its decline. 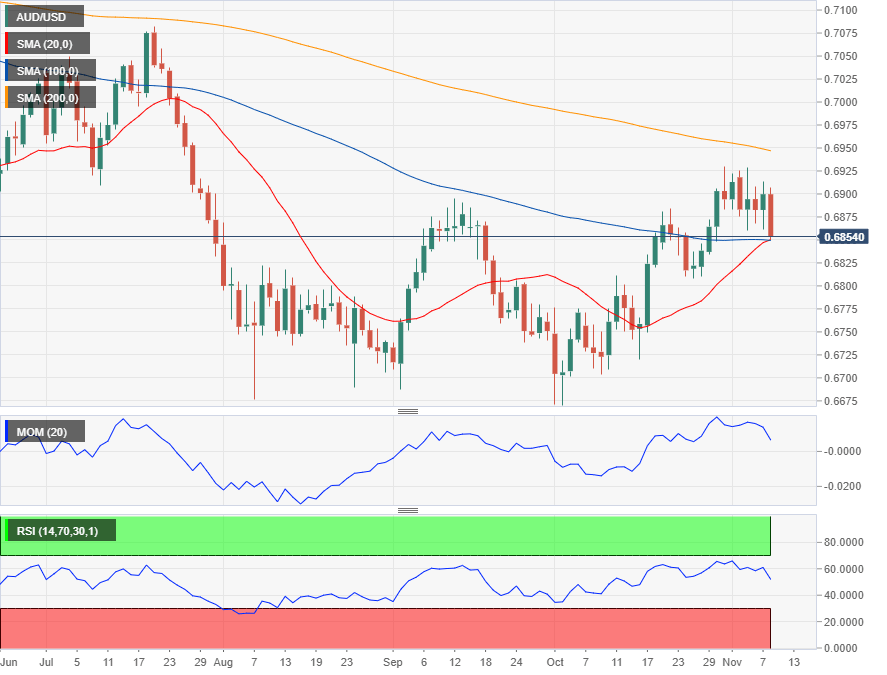 The AUD/USD pair is seen recovering in the short-term, but giving up afterwards, according to the FXStreet Forecast Poll. In the short-term, 53% of the polled experts are hoping for an advance, although the average target is barely above the current level. Bears take the lead int the monthly and quarterly updates, with most targets then accumulating below the current price according to the Overview chart, and despite the moving averages retain their bullish slopes.