US Treasury nominee Janet Yellen says that she will make clear that the US does not seek a weaker greenback.

She will affirm a commitment to market-determined dollar value at the next Senate confirmation hearing.

These are headlines circulating from a Wall Street Journal article on the weekend.

Meanwhile, casting minds back, Janet Yellen once touted the benefits of a weaker greenback for exports.

However, as the incoming Treasury secretary, she faces pressure to return the US to a “strong dollar” policy.

The US adopted a policy of favouring a “strong” dollar in 1995, marking an end to regular calls for other countries to drive their currencies higher.

And, then along came US President Donald Trump in 2017 who said the dollar was “getting too strong.”

Mnuchin also said an “excessively strong dollar” could have negative short-term effects on the US economy. Mnuchin went so far as to entertain Trump’s consideration to forcibly weaken the dollar in mid-2019.

However, Yellen herself has shared the same sentiment in the past as help in addressing the country’s current-account deficit.

The US dollar’s dominant role in the global financial system, as the world's reserve currency,  puts the onus on the Treasury to manage its responsibilities carefully.

Markets will be eager to front-run the new administration's policy before the fact, but a strong dollar is definitely needed if Biden's expansionary policy is going to be successful.

Yellen will now have to focus on a very different concern under her new tenure than she did when she began at the Fed in the 90's as a board member.

With interest rates at historical lows, the risk is a massive debasement of the greenback to the point of no return and Washington will be unable to pay its bills.

There is widespread bearishness for the greenback but a commitment to it from the White House should help to underpin the currency. 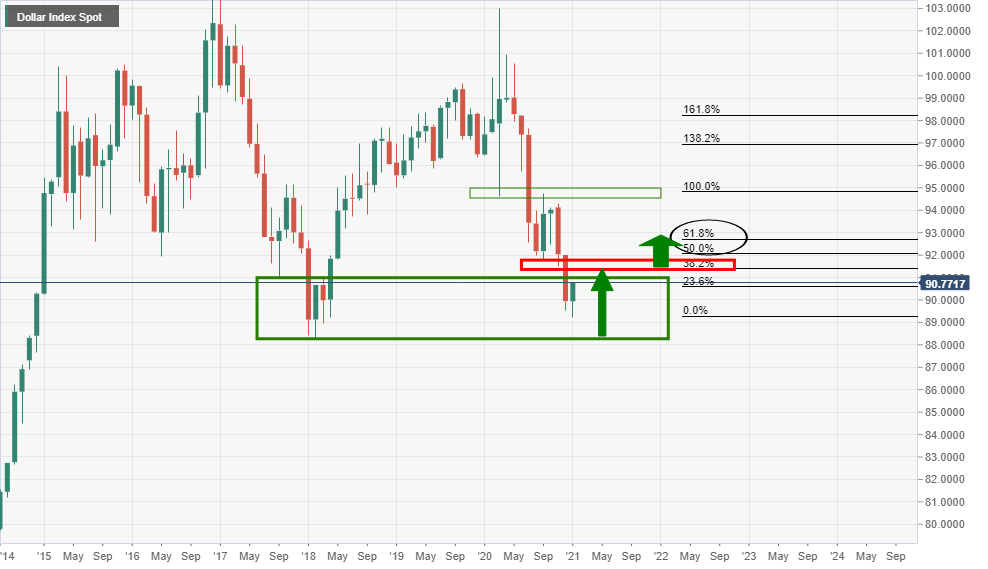 The dollar is retracing the monthly decline and a 38.2% Fibonacci level is in view meeting prior lows that will now be expected to act as resistance.

US dollar policy will be a hot topic for the first quarter of the year under the new administration.

Yellen will testify on Tuesday.

Meanwhile, in related news, there have been media reports this weekend on moves from the European Union to lay out plans to limit its reliance on the USD.

Citing a draft policy paper from the European Commission that will be adopted on January 19, the news notes that the EU’s vulnerability to US sanctions and to financial risks is of a topic and there are measures in the proposal.

''The plan includes measures to help protect against currency shocks, and allow greater scrutiny of foreign takeovers, according to a draft of the proposal obtained by Bloomberg. The plan to foster “openness, strength and resilience,” was earlier reported by the Financial Times,'' Bloomberg wrote.

The Chart of the Week: EUR/USD enters the bear's lair