XPeng shares rose strongly for the third straight session on Wednesday as the Chinese electric vehicle manufacturer said it has its sights on the global deliveries for its new SUV – the G9. XPeng also released a strong set of results this week, which helped boost sentiment further. The stock has now put in three straight days of gains as it breaks out of a long term range. We have highlighted this in our chart analysis below.

XPEV released earnings on Wednesday, and the numbers were good. While earnings per share (EPS) missed expectations, $0.09 versus $0.27, revenue came in well ahead at $847.4 million versus the average forecast of $791.1 million.

XPeng also raised guidance for Q4. Revenue guidance for Q4 is now at $1.1 to $1.7 billion, while analysts had been forecasting Q4 revenue at $904 million. XPeng expects to deliver 35,500 vehicles in Q4 at the midpoint of the guided range from the company. This would be a strong gain of nearly 200% yearly and in keeping with October;s yearly growth rate of 230% in terms of delivery numbers.

While delivery numbers are rising to record levels and growing strongly, XPeng is also growing its margin, meaning more profit per vehicle sold. Gross margins increased in Q3 to 14%, an increase of two percentage points from Q2 and a huge improvement from a year ago. Increasing margin should flow through to the bottom line.

XPeng (XPEV) Chairman Brian Gu was on CNBC on Wednesday and outlined ambitious plans for the company. He said XPeng wants half of all its deliveries to be outside of China with Sweden, Denmark and Holland to see XPeng vehicles from next year. The Nordic countries are often cited as important for EV manufacturers due to their high consumer adoption of electric vehicles. XPeng already delivers to Norway. China though remains the largest market for electric vehicles. “As a company that focuses on global opportunities, we want to be balanced with our contribution of delivery — half from China, half from outside China — in the long run,” Gu said in an exclusive interview with CNBC’s Arjun Kharpal.

The long-term consolidation phase has now been firmly broken out of as is clear from the weekly chart. This gives us the first target at $60 and then highs above $70. 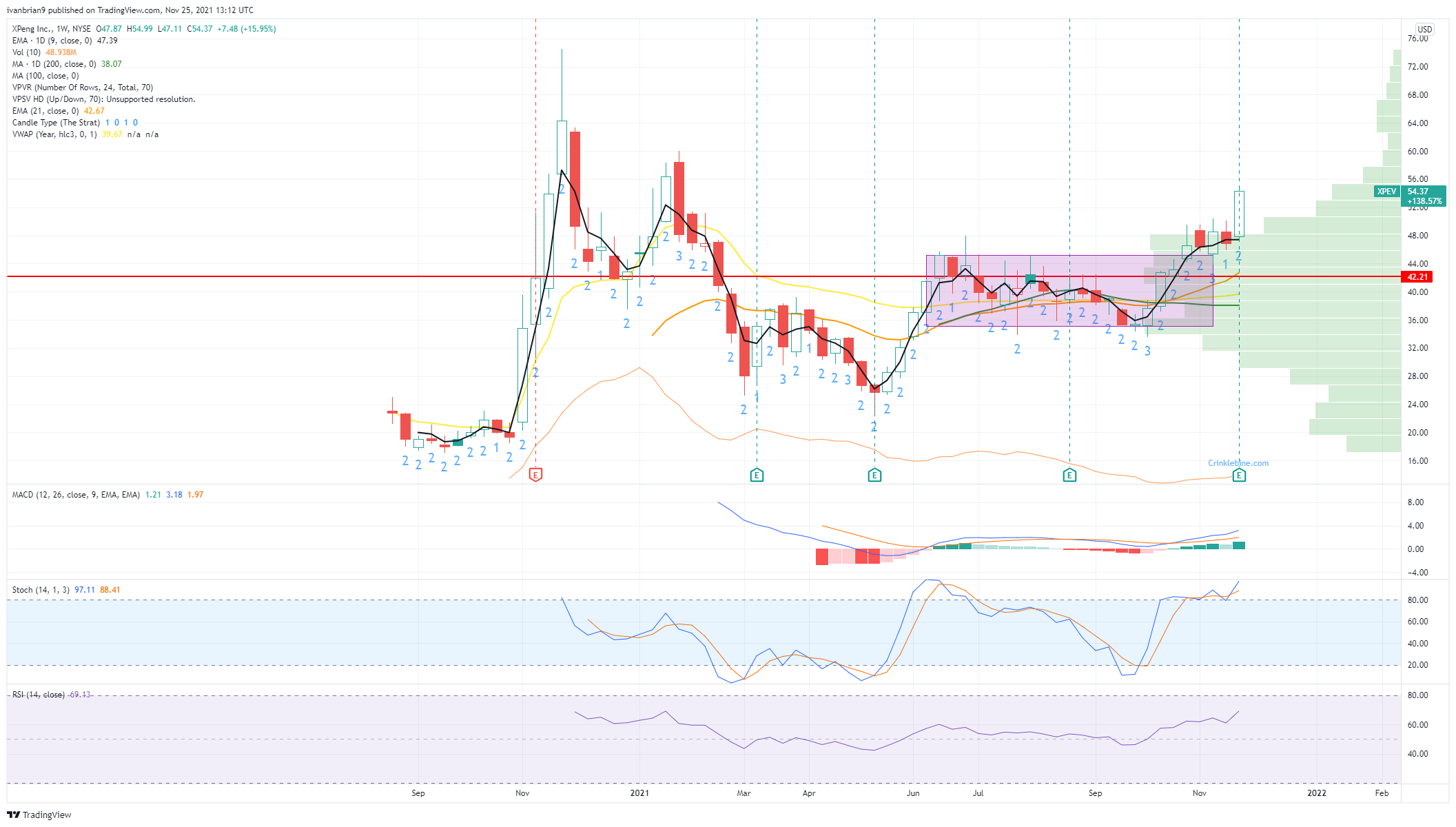 The daily chart gives another view of the breakout, which is now key support, at $45. Holding above here means more gains are likely, and the risk reward favours longs in our view. We also have a second consolidation and breakout phase with a top at $50. That is the short-tem support to hold, while $45 is the medium term level.

XPEV has now broken into a lower volume range so gains should be easier to achieve. Any retracement to the larger consolidation phase below $45 will ikely see a move to $38, which is the 200-day moving average. This would be an expected support point, but we would reassess when or if XPEV stock got back there. For now the trend is bullish with the two key supports as mentioned. $60 is the first target. 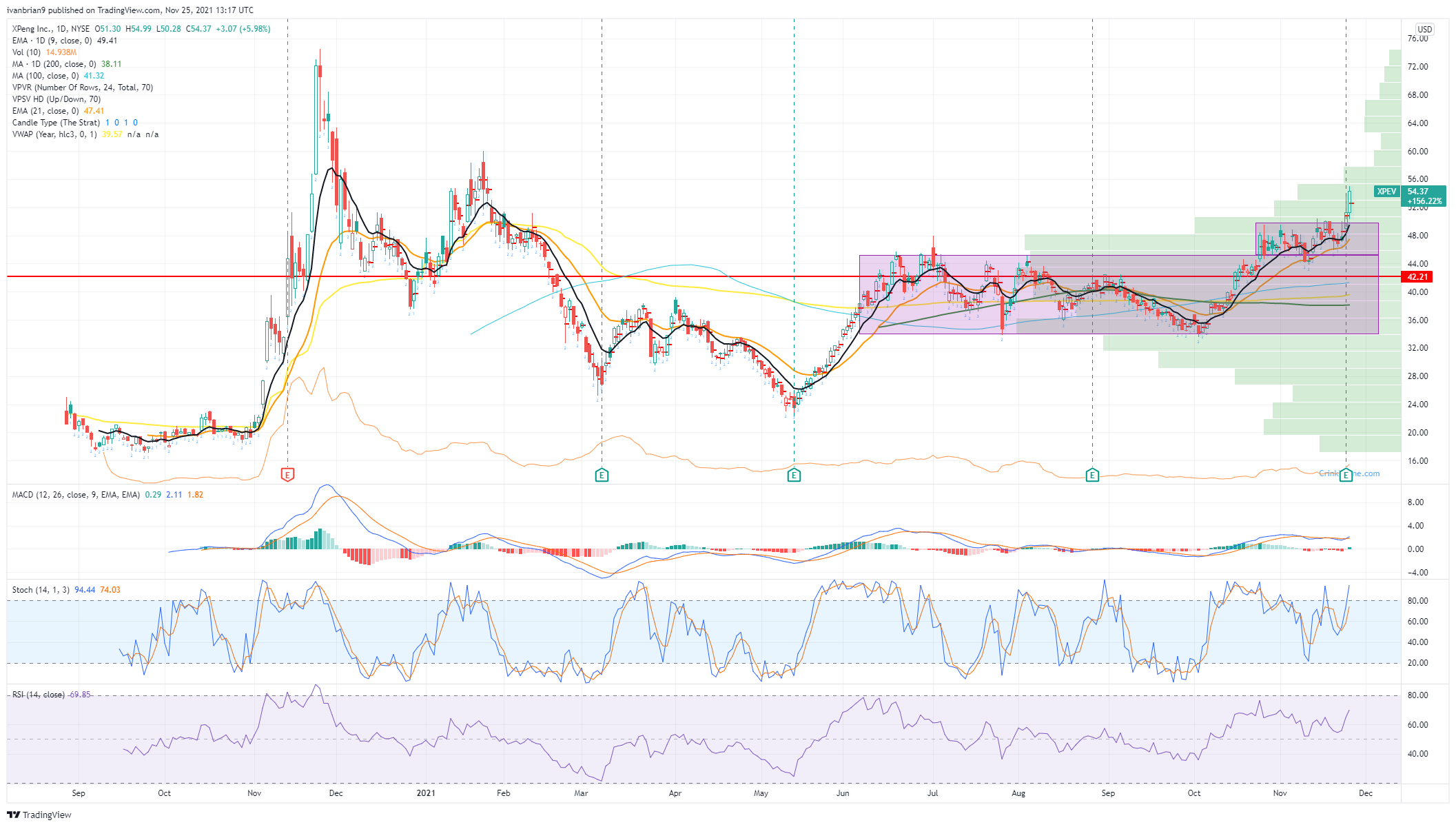