The EUR/USD dropped to an Intraday low of 1.1392 on Wednesday before ending the day at 1.1411. The common currency failed to strengthen despite a sell-off in the USD following Yellen’s testimony.

The difference between the US 10-year Treasury yield and German 10-yr Bund yield currently stands at 1.7284%; the lowest since the first week of November. Moreover, the spread has been steadily declining late Dec/early January. It stood at 1.832 at the beginning of the current week and fell to 1.743 yesterday.

The EUR may have underperformed on Wednesday due to a number of ECB officials expressing caution about inflation and its role in the ECB's policy normalization. The next move in the EUR/USD is more likely to be determined by the upcoming inflation data.

The spot may regain bid tone today if the yield spread continues to narrow further. A weaker-than-expected US PPI and dismal weekly jobless claims (due at 12:30 GMT) could weigh over the USD as well. Traders should also keep an eye on Day 2 of Yellen testimony, although it is more likely to be a repeat telecast of yesterday’s dovish take on interest rates.

FXStreet Chief Market Analyst Valeria Bednarik writes, “The downward potential remains limited according to the 4 hours chart, as the price settled a few pips above a still bullish 20 SMA, whilst technical indicators are currently bouncing from their mid-lines, after  correcting overbought conditions reached earlier on the day. The pair has an immediate support in the 1.1380/90 region, where buying interest surged ever since the week started, followed by a daily ascendant trend line currently around 1.1340.” 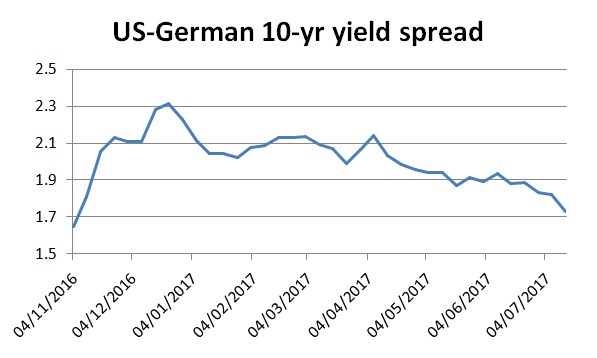