SIGA Technologies is soaring again on Monday as the company continues to benefit from the spread of monkeypox throughout the globe. Monkeypox is a viral infection that was common in West Africa but has now been identified globally. Initial cases are relatively small, but the wide geographical spread means that the number of cases is likely to grow. Monkeypox has been likened to chickenpox or smallpox, and it is for this reason that SIGA shares have been in demand. SIGA Technologies makes a smallpox treatment. Smallpox treatments will be effective for the treatment of monkeypox, according to experts, as monkeypox is in the same viral family.

SIGA stock and others involved with monkeypox or smallpox vaccines saw impressive gains last week. The WHO said last week it was concerned about the spread of the disease throughout summer in Europe.

"As we enter the summer season in the European region, with mass gatherings, festivals and parties, I am concerned that transmission could accelerate, as the cases currently being detected are among those engaging in sexual activity, and the symptoms are unfamiliar to many," Dr. Hans Henri P. Kluge, the WHOs Regional Director for Europe.

The US has already confirmed at least one case of the virus with Europe reporting several. The disease is native to West Africa. Last week the US FDA approved the intravenous use of SIGA's TPoxx treatment as an addition to the already approved use as an oral solution to smallpox. SIGA stock also gained last week as the US Department of Defense awarded SIGA a $7.5 million contract for the supply of oral TPOXX. This was in addition to a $26 million contract SIGA already has with the Department of Defense.

Other notable gainers in the space are Tonix Pharma (TNXP) and Emergent Bio (EBS). 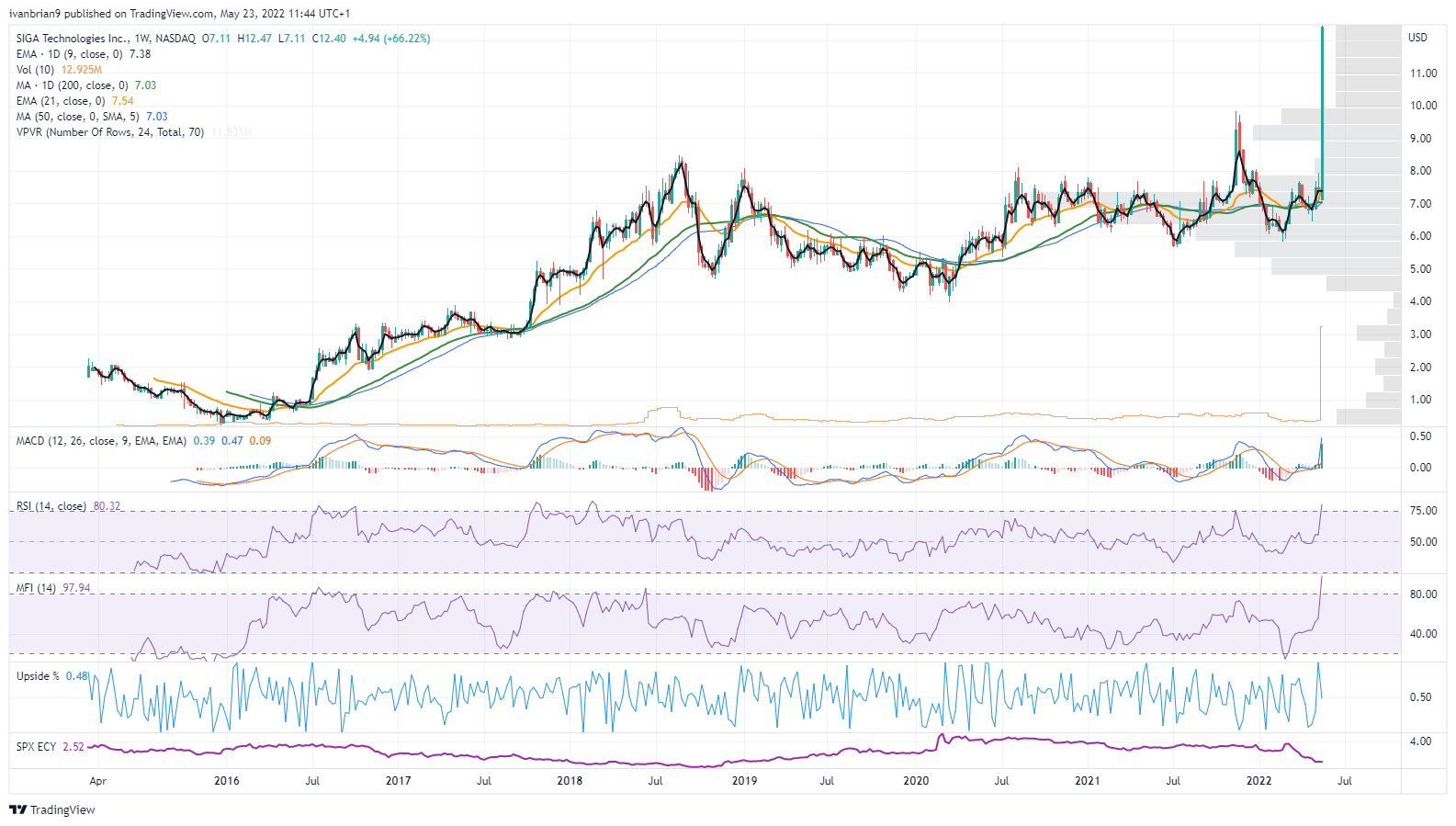 EUR/USD has managed to stage a modest rebound in the American session and climbed above 1.0400. Despite the risk-averse market environment, falling US Treasury bond yields after the latest inflation data seem to be limiting the greenback's gains for the time being.

GBP/USD rises above 1.2150 as dollar retreats

Gold has gained traction and turned positive on the day above 1.2150. With the US T-bond yields falling sharply on soft inflation data, the US Dollar Index turned south and erased a large portion of its daily gains, helping GBP/USD push higher.

Gold rebounds toward $1,820 on falling yields

Gold has turned north and advanced to the $1,820 area after having dropped toward $1,800 earlier in the day. The benchmark 10-year US T-bond yield is down more than 2% on the day near 3% after the latest US data, fueling XAU/USD's upside.

Ethereum price has breached a critical area of support over the past few hours, dipping below $1,000. The Fibonacci retracement indicator shows that ETH lacks any significant support levels that could keep prices at bay.