Tesla stock has been confounding predictions over the last number of sessions as the stock flirts with the $800 round psychological level. We have been bullish on Tesla for some time, but the failure to break and hold above $800 was making us seriously doubt the bullish stance and rethink our call. As recently as Monday we said we would give the stock one last chance and stick with our bullish call so long as Tesla stock remained above $781 and broke above $805. "Tesla is now looking like it may have put in place a double top at $805, and double tops are always bearish formations. TSLA stock needs to break and hold above $805." The job was more or less done on Tuesday. Tesla topped out at $812.32, and crucially in our opinion the stock closed above $805, closing at $805.72 for a gain of 1.74% on Tuesday. We remain bullish, therefore, and give ourselves some credit for sticking with the stock despite the choppy range it was stuck in.

Nickel is a key component for electric vehicle battery production, and EV makers have been duking it out to secure sufficient supply to meet anticipated future demand. Prony Resources said on Wednesday that it has struck a deal with Tesla in which the EV leader will purchase around 42,000 tonnes of nickel in a multi-year deal. Good news is always tempered by bad news, and while not directly bad, Volkswagen reacted to Tesla's opening of its new gigafactory in Berlin by saying it planned to speed up the transformation of its main manufacturing plant toward making electric vehicles. "There is no question that we have to address the competitiveness of our plant in Wolfsburg in view of new market entrants," Volkswagen's Michael Manske said. "Tesla is setting new standards for productivity and scale in Grunheide," he added.

Irrespective of the news flow both positive and perhaps negative in light of the potential increased competition from VW, we are now firmly in the bullish camp for the short term after closing above $805 on Tuesday. There is now a volume gap until $850, meaning TSLA stock should find it easier to push on. $850 is the next resistance, hence with a strong bar on our volume profile to the right of the daily chart below. In order to keep the trend intact, our pullback level to remain bullish now rises to $788, the 9-day moving average. 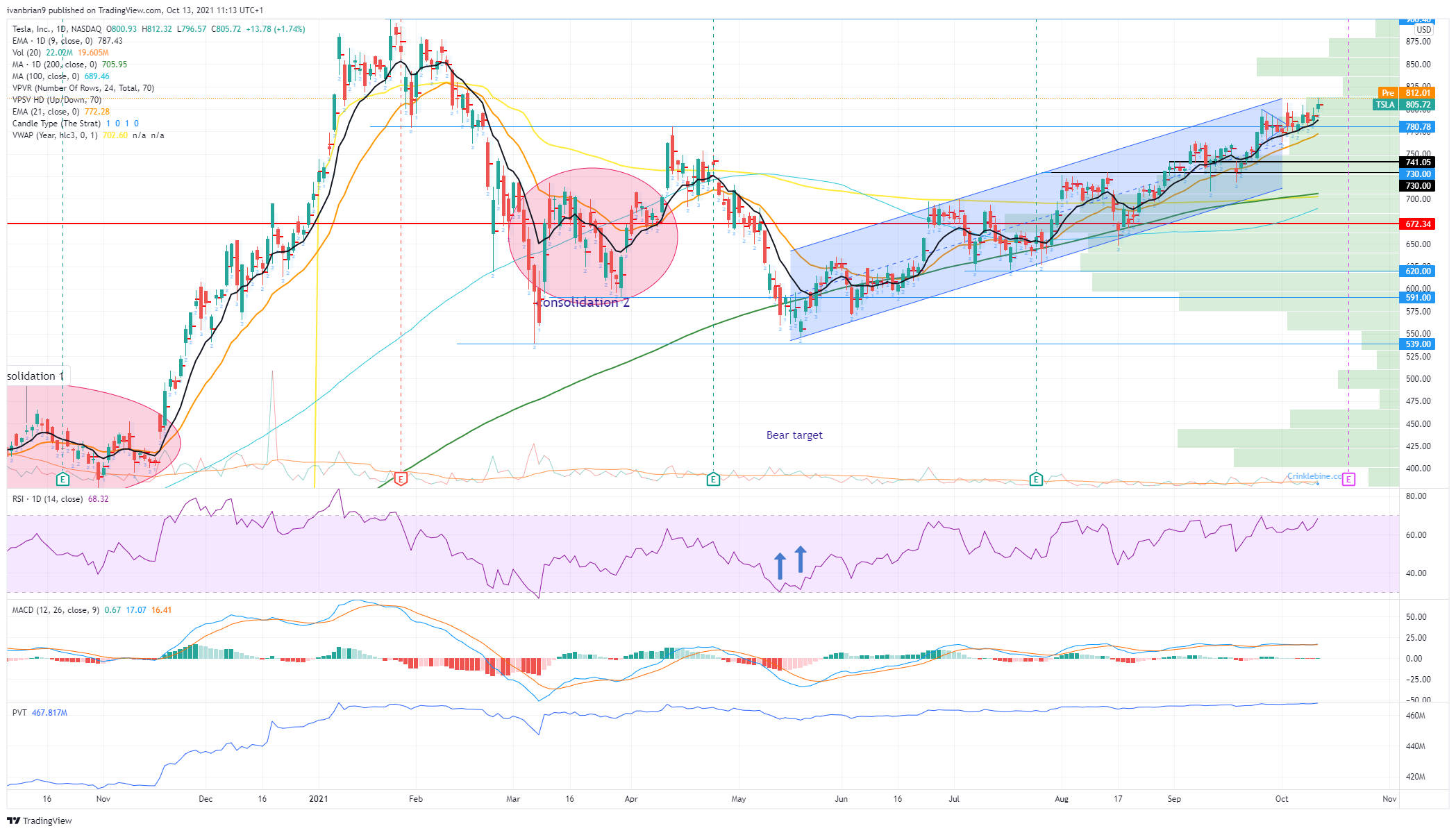 EUR/USD coming up for a breath of air in support

EUR/USD holding up at critical support in the hourly chart. ECB and Fed are in focus with critical data to end the week. The end of the week for European and US markets will bring plenty of key data for which could still some volatility for traders to enjoy.

Gold flirts with $1,790 hurdle on mixed concerns ahead of US PMI

Gold refreshes intraday high to $1,787 during the four-day run-up amid early Friday. The yellow metal witnessed pullback the previous day amid firmer USD, on relation fears, but the latest sentiment-positive headlines seem to have favored the gold buyers.

We get some non-movers today like the Philly Fed, Sept existing home sales, and leading indicators, but let’s face it, jobless claims own the space. Claims are not behaving as expected and are wildly at odds with job openings.