Update February 18: Sundial Growers Inc )NASDAQ: SNDL) has been sliding on Thursday, with shares changing hands at a loss of around 8% to $1.58 at the time of writing. Fears that the cannabis company's fund-raising exercise dilutes existing shareholders (described below) is the main downside driver. However, it is also essential to mention that the broader S&P 500 Index is dropping sharply as bond yields – ten-year Treasuries have topped the 1.30% level, the highest in around a year. Higher returns on safe debt make bets on stocks and especially pot ones less attractive for some traders. More: Sundial has three reasons to rise

Update SNDL shares have rebounded on Thursday after fellow pot producer Tilray announced a strong set of results after the market close on Wendesday. Sahres in SNDL are up over 3% during the pre-market. It is impossible to stay high forever – Sundial Growers Inc (NASDAQ: SNDL) shares have tumbled by 21.46% on Wednesday after the cannabis company said it would raise as much as $1 billion in various types of shares, warrants and rights, diluting current holders of its stock. The financial news outweighed Sundial's more optimistic news that it s now compliant to stay on the NASDAQ exchange. After taking an 18.5% in Indiva – a fellow Canadian pot company focused on edibles – other purchases are on the cards. What can bring SNDL back to the highs? The Calgary-based company may soothe investors by emphasizing that it is unlikely to deploy all its potential new cash and leave current investors better off. NASDAQ: SNDL is changed hands at $1.79 in Thursday's premarket session, up some 4%.

Update: Shares in SNDL are sharply lower on Wednesday as investors digest Tuesday's Indiva announcement. SNDL shares are currently trading at $1.85 a loss of 15%. Sundial shares had peaked near $4 on Feb 11 as strong retail buying bosted the shares of most cannabis stocks.

Update 2 February 16: Sundial Growers Inc (SNDL) has announced it is to take a near 19% share in Indiva. Indiva is a Canadian cannabis producer with an emphasis on edible cannabis products. Shares in SNDL are down % on Tuesday at $2.05.

Update, February 16: Traders are returning to their desks after a long weekend in most of North America and some may want to seize on Sundial's recent drop. After falling by over 12% on Friday, Tuesday's premarket trading is pointing to some stability. It is essential to note that sentiment around cannabis shares has somewhat soured after a surge. Nevertheless, the political change in Washington and growing demand may push equities higher. President Joe Biden is on course to pass his covid relief bill, and other legislation is set to follow.  More: PLTR – a dive in ahead of earnings

How long can a stock stay so high without a correction? Sundail Growers Inc (NASDAQ: SNDL) has been falling for two consecutive days, closing Friday's trade at $2.08, a drop of 12.61% on the day. Nevertheless, shares of the Calgary-based cannabis firm are substantially above the pre-rally levels around $1 or the penny-stock valuation seen early in 2021.

Those that rode Sundial – and other marijuana shares – have felt the need to take profits. After the rush and the correction, where next for SNDL? 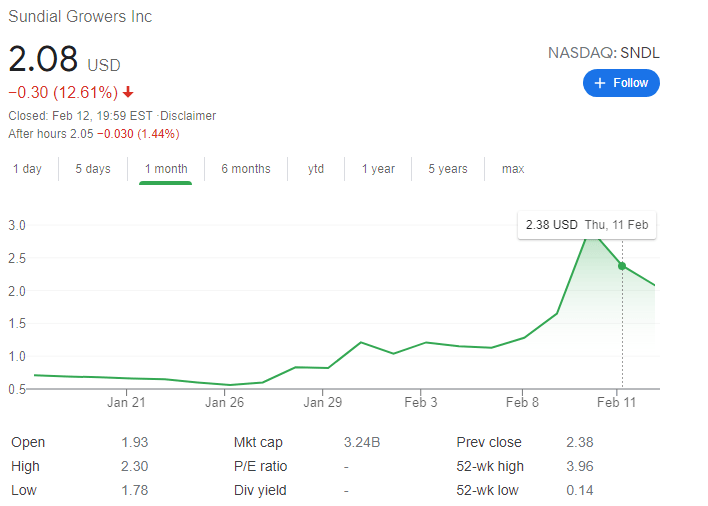 The recent downfall puts a fresh focus on Sundial's finances. Similar to its peers, elevated expectations have resulted in significant undertakings and a growing debt pile. The company was forced to restructure its debt back in 2020 as estimates for a lockdown-induced consumption of cannabis failed to materialize.

On the other hand, 2021 has brought with it President Joe Biden – and a Democratic majority in both chambers of Congress. While the new administration is primarily focused on providing economic relief, several Senators such as majority leader Chuck Schumer are backing decriminalization of pot.

The American market is far larger than the Canadian one, and despite the growing legalization of weed in several US states, legal sales have had to compete with the black market for a long time. Hopes of a more lax nationwide policy may trigger a new move higher for Sundial and its peers.

At some point, bargain-seekers may jump back into the sector and that includes Sundial, which if now positioned much better than in 2020 for further growth –  after ridding itself from previous financial burdens.

The US bank holiday on Monday may allow traders to find a balance between the parabolic surge and the quick correction, and perhaps put NASDAQ: SNDL on a better footing.