Update, February 17: Shares in Palantir (PLTR) continue to rally on Wednesday, registering a 5% gain so far on Wednesday. PLTR was upgraded at Goldman Sachs earlier on Wednesday with a price target raised from $13 to $34 and a rating hike from neutral to buy. Credit Suisse also increased its price target for Palantir on Wednesday from $17 to $20 but maintained an underperform rating. And not to be left out Morgan Stanley raised its price target to $19 with an underweight rating. The Goldman upgrade appears to be dominating investors thoughts as Palantir share are currently 5% higher at $29.05.

Update, February 16: Shares in Palantir (PLTR) are sharply lower on Tuesday as the company announced a surprising earnings-per-share (EPS) loss of $0.08 versus analyst estimates for $0.02 gain. Q4 sales did manage to beat expectations, coming in at $322 million against a $300 million expectation. PLTR shares are currently trading $29.82 a loss of 6.55 at the time of writing.

Shares in Palantir have been strong as the company has caught the Reddit revolution trend. Shares in Palantir are up 33% for 2021 and 100% over the last three months. Management has been bullish about Q4 results with revenue growing strongly and Q4 guidance was increased during the company's last earnings release for Q3 2020.

But looking at recent announcements from Palantir it would appear that there is every chance Q4 could strongly outperform analyst estimates.

In the last quarter alone, Palantir has announced numerous new deals and recently penned a new partnership with IBM. While a lot of this news is in the price it still shows a strong pipeline of client and therefore revenue growth.

It also shows that the very reason for Palantir's IPO is coming to fruition. It was not thought that Palantir wanted to IPO given its government contracts with the intelligence community. However, in order to broaden its client base into the corporate world Palantir surprised many with its Sept 2020 IPO. But since then multiple corporate clients have come on board, IBM, RIO Tinto, Proctor&Gamble, etc.

Palantir has a unique data analytics tool, one of the best in the industry. The US intelligence community is highly selective in who it does business with. Government contracts are also less likely to be rescinded once in place. Corporate clients may switch more regularly and have more cost concerns but according to various industry insiders, there is no other product currently on the market that matches Palantir.

One area that investors have been worrying over is the expiry period of the founder's lockup. During Palantirs IPO, the three founders Peter Thiel, Stephen Cohen, and Alex Karp were only allowed to sell 20% of their holding. This restriction will be lifted three days after Palanirs results on Feb 16, so Feb 19! Investors have been worrying over how much potentially the founders will want to sell and the effect of the share price. Given the big appreciation in the share price it will certainly be tempting to cash some of the gains in. If the founders wanted to sell a large percentage of stock this would usually be done by an accelerated bookbuild, directly to institutions at a discount price to the market. The amount of discount depends on the appetite for Palantir shares. The shareholding would not be drip-fed into the market thereby impacting the share price. The key information is if the founders sell and how much? It is this that will likely impact the share price not actual supply into the market. Given the new contracts announced by PLTR recently, RIO Tinto, IBM, Proctor & Gamble, etc management may have confidence in future share price appreciation.

Palantir Technologies was founded in 2003 and is based in Denver, Colorado. The name is reportedly from a knowledge stone in JR Tolkeins background to Lord of the Rings. Peter Thiel one of the founders foresaw the company as being key to preserving civil liberties while helping reduce terrorism, fraud, and overall threats to society in general.

The company was headquartered in Silicon Valley but moved shortly after to Denver Colorado, as the founders were reportedly disillusioned by the values that Silicon valley came to represent.

In Palantir's early development it looked for investors to fund its foundation and expansion. But PLTR struggled in this regard. Eventually, based on its stated aims the company secured an investment from the CIA’s investment arm, and Peter Thiel backed the company to the tune of $30 million. The investment of the CIA opened doors to other government clients and in 2015 TechCrunch reported that 12 government agencies were clients of Palantir, including the CIA, NSA, FBI, Air Force, Marine Corps, and Special Ops Command among others. Clearly a highly sensitive client list.

Palantir was soften thought of as one of the most secretive companies on earth given its client list and an IPO was thought to be highly unlikely. Indeed the CEO once downplayed the idea of an IPO as it would make “running a company like ours very difficult.” However, growing a company necessitates broadening the client base. It is possible Palantir saw the aftermath of the upswing in counter-terrorism and realized it couldn’t rely on government agencies forever. Defense and intelligence funding was at record high levels and questions would naturally arise as to how long this would remain the case. Either way the company wanted to broaden its client base into the corporate sphere and an IPO was decided upon as being the best method to move forward.

So what exactly does Palantir do?

Palantir was not aiming to replace human decision making with Artificial Intelligence (AI) but to provide highly accurate information to human analysts. In layman's terms, Palantir basically has highly complex data mining solutions. Palantir helps security agencies mine through huge sets of data to interlink information that human intelligence would either take too long to or not find at all. Modern security produces reams of data from surveillance, intelligence finance, etc, and making connections between data sets is vital. While Palanitrs technology is mostly used in the intelligence and security community its data mining capability was also used in the case of Bernie Madoff to trawl through masses of financial data and find key data.

Palantir was set up by Peter Thiel of Paypal fame, Alex Carp, the current CEO, and Stephen Cohen. Thiel is the biggest shareholder as he has invested further in Palantir via various investment funds.

Palantir has only released one set of quarterly financials, Q3 2020. That showed revenue growth of 52% year on year and Palantir increased its guidance for Q4. Revenue has been growing steadily from $595 million in 2018 to $742 million in 2019. Palantir expects revenue to come in at over $1 billion for 2020.

At the time of writing seven Wall Street analysts cover Palantir. The consensus is a hold rating with an average price target of $16. However, some of these estimates will be updated post results on February 16. Jefferies increased its price target on Friday, February 12 to $40 in advance of Q4 results, citing recent client wins.

Palantir shares have been stretched lately spiking up to $45 on January 27, in tandem with peak /wallstreetbets mania! Since then shares have slid back to trade in the low $30’s ahead of results on Tuesday, February 16. This should give some upside if results come in better than expected. However, the surge in the share price means it would need a very strong set of results to keep the momentum going. Short-term traders may indeed push the price near $50 if results do impress but this move may not be sustainable. $25.87 is a key support to the uptrend and this level should see institutional buyers looking at longer-term value assuming results meet or beat! 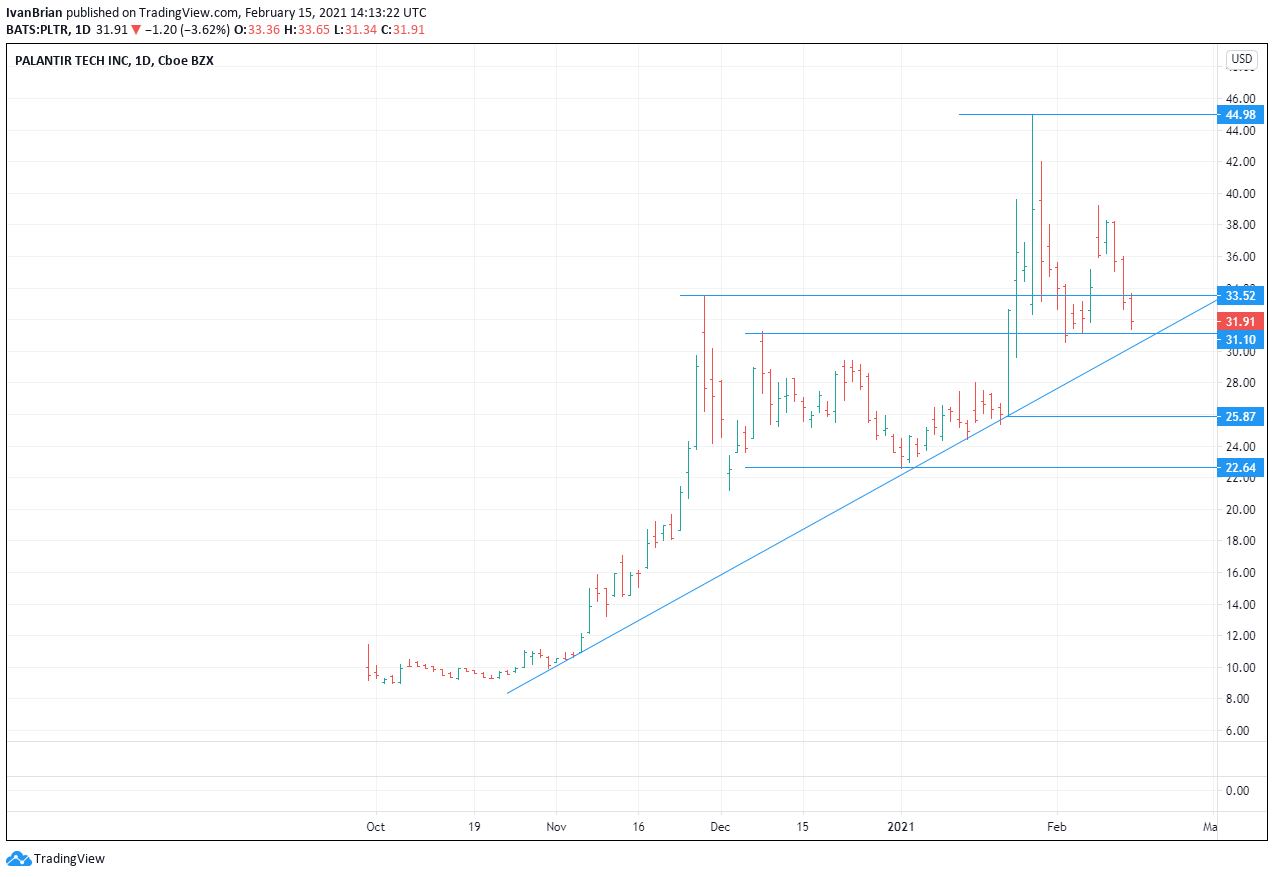