Smile Direct Club (NASDAQ: SDC) is in the dental business, as the name suggests. The company provides a teledentistry-technology platform and offers a clear aligner treatment available through teledentistry. Smile Direct (SDC) has over 200 orthodontists in the US, which is its main area of business, and also the UK and Canada. The company recently announced an expansion into France, with the launch expected in Q4 of 2021. Smile Direct (SDC) will bring its premium clear aligners, telehealth platform and whitening system to the first France Smile shop in Paris this year.

The most recent set of earnings for SDC were not well received by the market, with several investment banks cutting price targets afterwards, and investors selling the stock. The results were released on August 9 and SDC stock fell 24% on the day after.

However, it was the short interest that attracted traders on social media to the stock, as the name quickly spread and the stock spiked 16% on September 13.

This is another short squeeze. SDC is not a typical buy-and-hold profitable stock, so just know that if you are trading this, it is highly volatile. Risk warning over, if you want to have fun go ahead! However, we are bearish on this one and I know you will not be happy to hear that. But we have to call it as we see it.

Ignoring the poor financials let's focus on the chart. What we have is a long-term downtrend and the recent spike has topped out lower than the previous spikes. This has been a feature of many meme stocks, as the power is getting weaker as 2021 progresses. Look at AMC and GME, for example. The spikes earlier in the year are higher than now. So, a bearish trend then. But yes, a short squeeze can have dramatic effects, but to do so the move must be really painful and sustained.

A quick sharp spike is not going to make shorts cover their positions, they will just ride it out. This is a power game: who is bigger, who has more firepower, the shorts or the squeezers? In this case, think the shorts as the move is not going to last long enough to squeeze the shorts to cover. The short interest is high but not GameStop (GME) high. I could be wrong but that is all the longs have.

The stock is not profitable and that is the reason why it was shorted in the first place. Yes, AMC and GME worked but already it is proving harder to maintain interest and squeeze names and those also had higher short interests. GameStop was unique, as it captured a huge amount of concentrated interest. Now, retail traders have their focused spread among a much bigger list of stocks whereas earlier in the year they all focused on GME and then AMC.

However, just going back to the chart if you longs do manage to get above $7.50, then you may have a change as volume thins out above there, not dramatically but perhaps enough to sustain the move a bit longer. But so far, all SDC has done is fill the earnings gap – markets love to fill a gap but that is often it, fill the gap and then resume the trend which in this case is bearish. $6.78 is the point of control and so a high volume, resistance area. 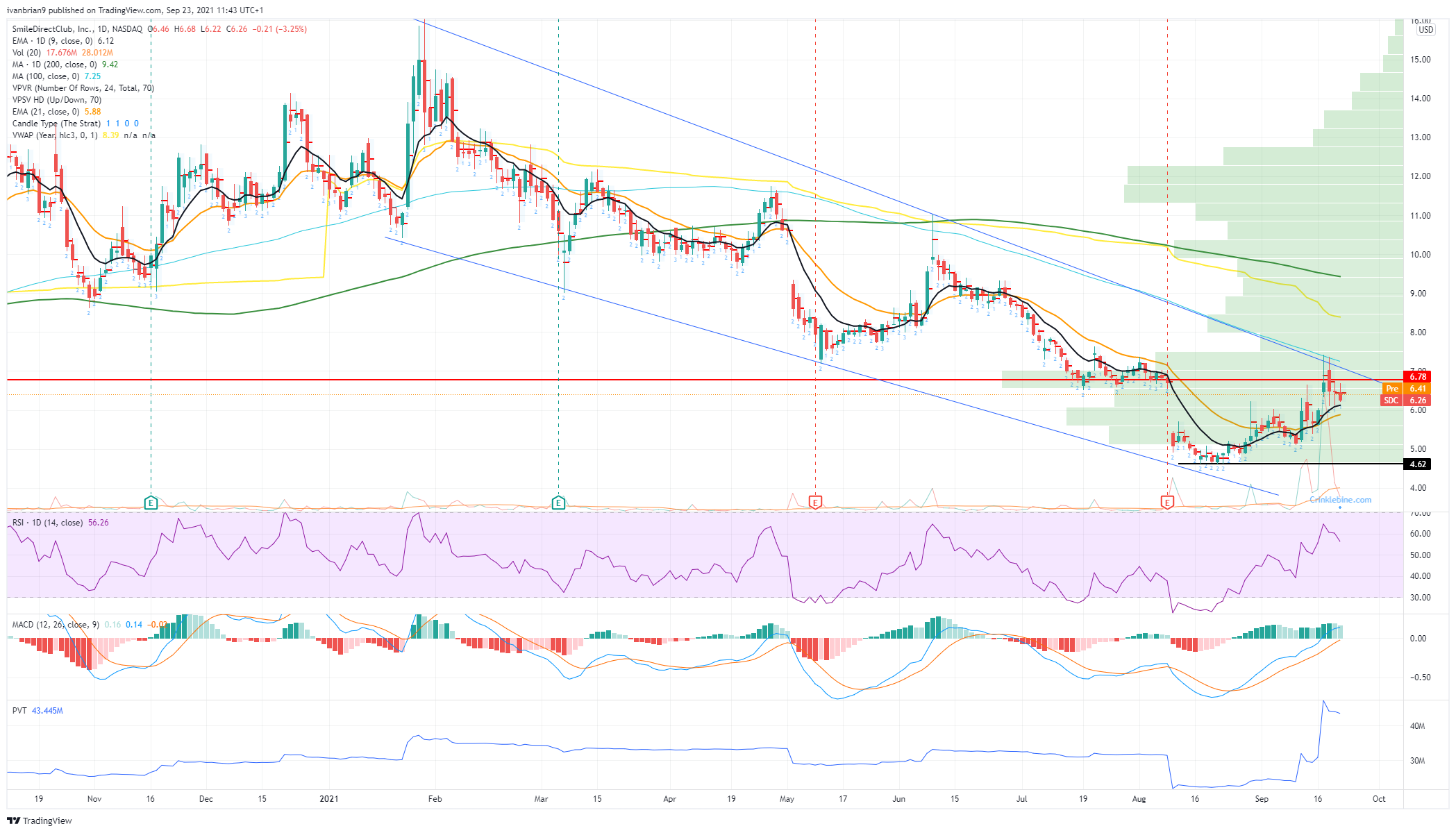