Another bumpy ride on Wall Street ended on Friday as Amazon's positive earnings capped a run of mixed big-tech numbers and upbeat economic data in the form of Nonfarm Payrolls surprises. The case for Federal Reserve rate hikes was cemented This led to gold prices falling under pressure from a firmer dollar and higher US Treasury yields.

For the open, a higher yield environment and hawkish sentiment in global central banks would be expected to weigh on risk appetite — throw in the prospects of an imminent Russian invasion of Ukraine, then that is a mix for an even strong US dollar.

Is Russian an invasion imminent?

... the markets, nonetheless, might get the real thing and according to the US White House national security adviser Jake Sullivan, who was interviewed in the media on Sunday saying

''We are in the window...Any day now, Russia could take military action against Ukraine or it could be a couple of weeks from now, or Russia could choose to take the diplomatic path instead.”

“We believe that there is a very distinct possibility that Vladimir Putin will order an attack on Ukraine,” Sullivan said on ABC’s “This Week.”

DXY on the march

The dollar index, a gauge of its value against six major currencies, rose to 95.70 (DXY), after falling to a two-week low of 95.136 amid a resurgent euro.

However, the dollar was still down 1.8% on the week, on pace for its largest weekly percentage decline since November 2020.

Data showed US Nonfarm Payrolls grew 467,000 jobs last month vs an estimate whereby economists polled by Reuters had forecast 150,000 jobs added in January. Estimates ranged from a decrease of 400,000 to a gain of 385,000 jobs. Data for December was also revised higher to show 510,000 jobs created instead of the previously reported 199,000.

Adiaolylu, Average Hourly Earnings, a measure of wage inflation and a closely-watched metric, climbed 0.7% last month, and 5.7% on a year-on-year basis.

AUD/USD is a compelling story for the open based on the above risk-off potential and its high beta tendency to global equity prices and its proxy status to risk appetite:

Bar potential mitigation of the markdown and the imbalance thereof, a break of 0.7050 and then 0.7030 would be key: 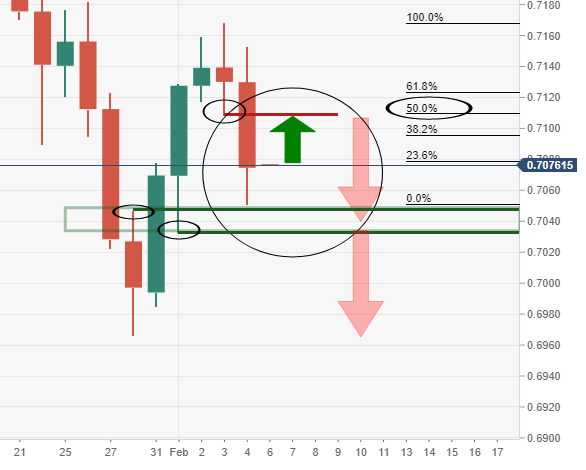 For the open, the H1 chart is offering a bearish scenario as follows: