Update March 4, 1630GMT: Shares in Palantir bounced strongly on Thursday as Cathie Woods ARK Invest buys yet more shares in the security technology firm. ARK Invest bought another 2.6 million shares in PLTR on Wednesday. It is unclear if any of these shares are sales by executives on the expiry of the lock up period. Palantir founders and senior executives had been prevented from selling shares in the company until after Q4 2020 results.

Palantir shares have been under pressure of late as the general sell-off in tech spreads to all sectors and not just isolated to big tech. Stellar gains from the March 2020 lows, a switch to reopening consumer cyclical stocks, and fears over inflation have all hit technology stocks.

Palantir reported results on Thursday, February 16 which had disappointed investors. Palantir reported an unexpected loss but generated strong revenue growth with a strong outlook for the years ahead.

Palantir's results showed a loss from operations of $156.6 million. Palantir did beat revenue estimates with $322 million versus an estimated $300 million.

Palantir shares slipped after the results release closing February 16 down nearly 13% at $27.84. However, the shares quickly received a number of catalysts. Firstly Goldman Sachs issued a strong upgrade to PLTR shares on February 17. Goldman upgraded the stock from neutral to buy and increased their price target from $13 to $34.  "With improving visibility into near- and long-term growth, we believe PLTR should trade more in line with 30%+ growth businesses, which are trading at 44x CY21 sales, our new target multiple for PLTR on SNTM sales," Goldman said.

Now a third purchase, this time for 3.3 million shares has been attributed to ARK Invest.

It is not clear if this purchase of 3.3 million shares included any lock-up sales. Senior executives and founders of Palantir had been prevented from selling any of their holdings until 3 days after the release of Q4 202 results.

During Monday's pre-market PLTR shares are just testing resistance at $25.87. Shares are trading at $25.60 at the time of writing. Shares would also need to break above $28 to end the series of lower highs. 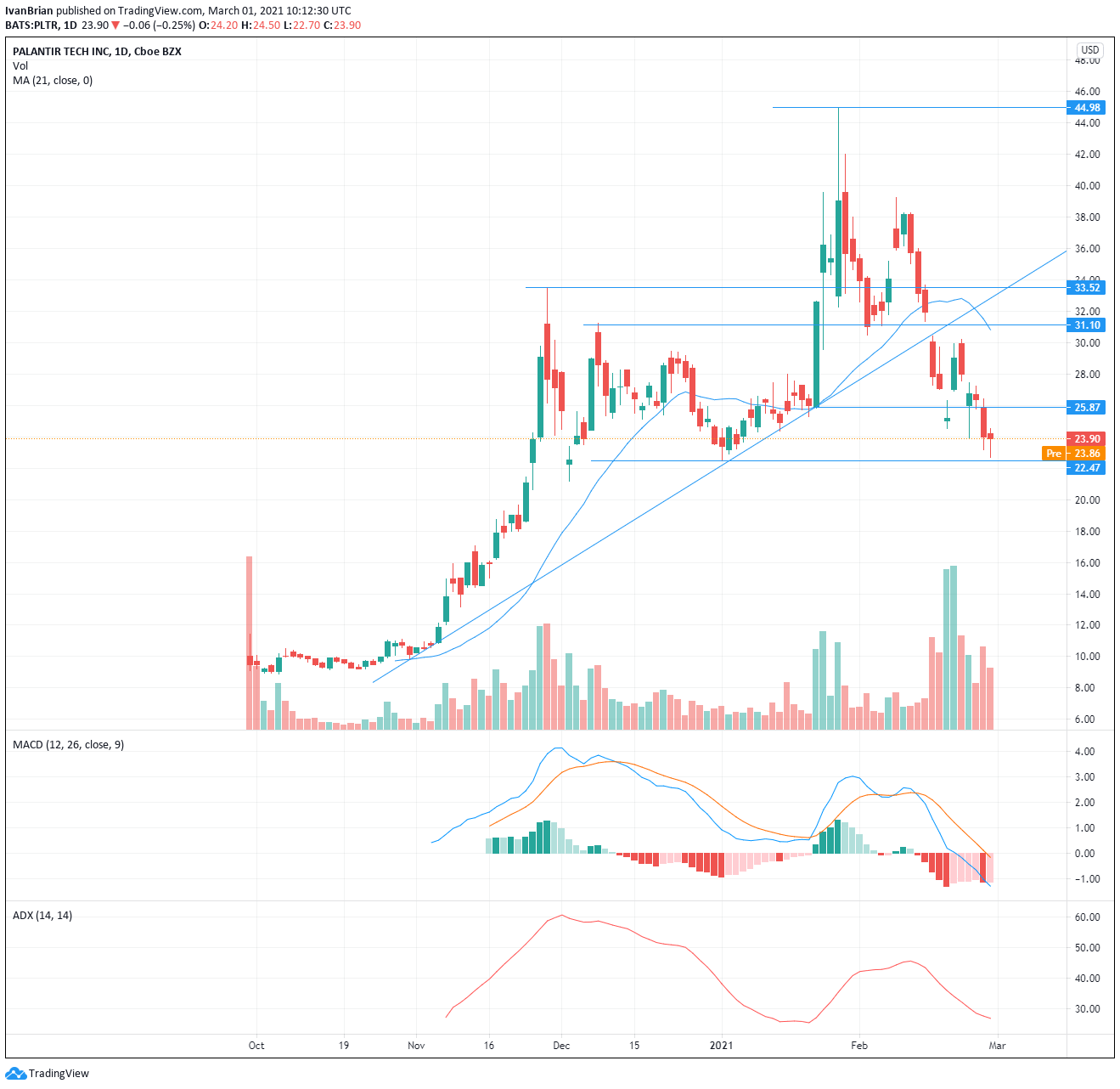 Update March 4: After a 32% drop witnessed in February, Palantir Technologies Inc (NYSE: PLTR) shares extended the rout for the third straight trading day of March, closing Wednesday 3.64% lower at $23.59. The shares of the data analytics specialist tracked the broader market sell-off, as Treasury yields rebounded on expectations of strengthening US economic recovery. Although in the post-market trading, the PLTR stocks jumped 5.30% to settle just below the $25 threshold. ARK Investment’s Cathie Wood failed to offer any insights on her recent addition of 3.4 million PLTR shares, in her Q&A session with Behzinga in the US last session.

Update March 3: Palantir Technologies Inc (NYSE: PLTR) shares are trading at around $24.50 on Wednesday, marginally higher. Stocks of the somewhat secretive data analytics firm are outperforming broader stock markets, but fail to impress enthusiastic investors who were used to stronger moves. Earlier in the week, PLTR received a boost from considerable investment by ARK Investment. The star company led by Cathie Woods seemed to have a "golden touch" after jumping onto Tesla and Bitcoin at near-perfect timings and scoring big wins for investors. Cathie Wood is to have a Q&A session with Benzinga at 1400 EST.

Update March 2: Sometimes the hype comes from a frenzy on Reddit's WallStreetBets forum and at others, it comes from institutional investors instead. ARK Investment, run by media and tech-savvy Cathie Woods, has positively impacted Planatir Technologies Inc (NYSE: PLTR) shares. The star manager bought over 3.3 million shares, causing a ripple effect that is set to continue into Tuesday's trading. The firm founded by Peter Thiel among others is set for an increase of 1% according to premarket trading – on top of Monday's 3.8% gain.

Update March 1: Palantir Technologies Inc (NYSE: PLTR) has been rising as a new month begins with news that Cathie Woods' Ark Investment has scooped up additional shares of the data analytics firm. Woods has been gaining a reputation of having a golden touch after successful ventures into Tesla and Bitcoin. At the time of writing, PLTR shares are changing hands above $25, an increase of over 5%. Its advance exceeds that of broader markets, which are recovering as yields calm down.

EUR/USD pressured toward 1.20 on dollar strength

EUR/USD has extended its gains toward 1.20 as the safe-haven dollar gains ground. Fed Chair Powell described the recovery as "patchy" and worries about the virus are also weighing on investors.

GBP/USD is trading below 1.39, down on the day. While the UK made a post-Brexit deal with India. France rejects Britain's provisional changes to fishing licenses. Virus woes weigh on risk sentiment, UK Final Manufacturing PMI, Brexit chatters in focus.

Gold witnessed some selling on Tuesday and eroded a part of the overnight gains to two-week tops. Resurgent USD demand, a modest pickup in the US bond yields exerted some pressure on the metal.

With a million new jobs looming, why can’t the dollar rally?

The U.S. dollar kicked off the first trading day of May with broad-based losses. On Friday, U.S. non-farm payrolls are due for release and with the labor department expected to report a million new jobs, some investors are wondering why the U.S. dollar is unable to rally.