UPDATE: Nvidia is down 1.6% and trading at $246.69 per share heading into Wall Street's close. Equities rallied after the opening, with most indexes posting substantial intraday gains. However, indexes lost momentum in the final hours of trading, barely holding in the green. Investors struggled to price in an unexpected jump in weekly unemployment claims, resulting from employees shortages and businesses disruption amid the Omicron wave hitting the US. Speculative interest will likely remain side-lined in the upcoming days, ahead of the US Federal Reserve meeting, scheduled for January 26. 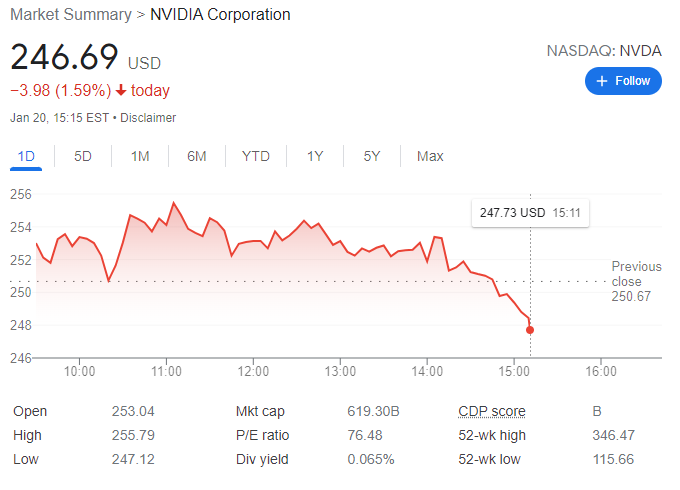 Previous update Nvidia bounced quickly off the open's sell-off on Thursday and is now up 1.2% at $253.70 half an hour into the session. Shares of NVDA traded down as low as $250.60 at the open. Last weekend's announcement that the star GPU designer would be delaying production of its new RTX 3090 Ti GPU had led to a plunge in the share price on Tuesday and Wednesday of this week.

NASDAQ:NVDA was one of the hottest stocks during the calendar year of 2021, but so far in 2022 it has been a bit of a dud. Shares of NVIDIA are down by 10.55% since the calendar flipped over, as growth names have been victim to the ongoing tech sell off. It’s not that anything about its underlying business or long-term forecast has changed though. NVIDIA is still releasing a wide range of products across all of the hot new tech industries including the Metaverse, artificial intelligence, and gaming. The price multiple has gotten away from the stock a bit, which is likely why analysts and investors are targeting other laggards in the semiconductor industry.

NVIDIA has reportedly stopped production of its RTX 3090 Ti GPU chips over the weekend and could also potentially be delaying its release to consumers. The chip was just announced at the recent CES 2022 expo in Las Vegas, but it seems that the product is already temporarily being halted. Its entry-level GPU, the RTX 3050, is still set to be released at the end of January so it doesn’t seem like this model’s production was affected.

Also unveiled at the CES 2022 Expo? NVIDIA is partnering with a company called TuSimple (NASDAQ:TSP) to produce self-driving freight trucks. Autonomous and electric trucks have been making headlines lately as the oft overlooked segment of electric vehicles is coming to the forefront. Tesla (NASDAQ:TSLA) is supposedly shipping out its first Tesla Semis this month, while Rivian (NASDAQ:RIVN) has been a popular name on the stock market over the past few months.