Nokia (NOK) has been edging lower on Tuesday, falling nearly 10 cents or around 2% to $41.8 at the time of writing. The gradual decline still leaves the Finnish multinational's stock above levels seen in mid-January – yet below the surge prices of over $6 recorded toward the end of last month. Bulls on shares of the former cellphone maker giant may be encouraged by its upbeat financials. Most importantly, Free Cash Flow has turned positive. Will bargain-seekers and Reddit retail traders push shares forward? Nokia is all about Connecting People, as the company's old slogan goes. 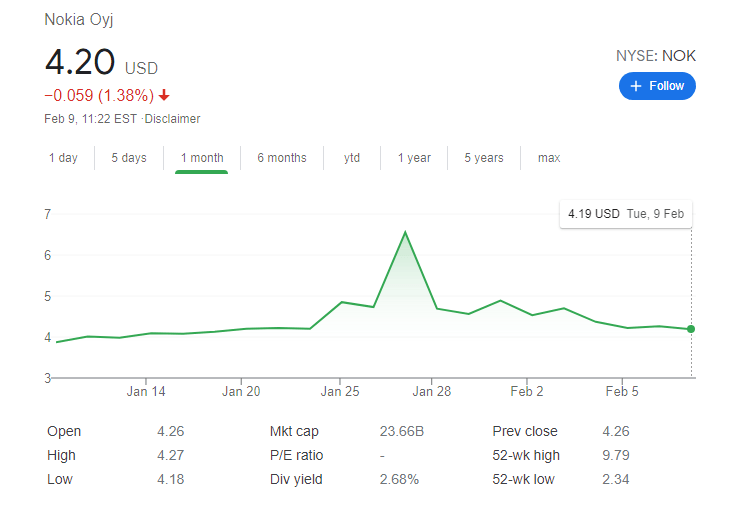 Nokia has been one of the stocks of 2021, soaring volatility and soaring volumes were the result of a doubling of the NOK share price in January. NOK found itself caught up in the Reddit-fueled /wallstreetbets phenomenon. Nokia was seen as a battered down, former tech behemoth, just waiting to regenerate. Blackberry, another dinosaur from the early age of mobile phone use, also coincidentally was targeted by the /wallstreetbets group.

Nokia was the biggest mobile phone maker in the world in the early days of the mobile phone industry. Producing innovative and reliable handsets that were snapped up by consumers. Nokia (NOK) was the Apple (AAPL) of the time during the embryonic mobile phone days.

The rise of the smartphone sounded the death knell for Nokia. The smartphone killed off Nokia’s (NOK) dominance as it failed to move with the times. Apple (AAPL) introduced the iPhone and the world was changed forever. Not a smartphone but a handheld computer. Other manufactures quickly realized the changing landscape and launched competing products, Google (GOOGL) launched Android to compete. Asian manufactures such as Samsung became Apple's main competitor but Nokia (NOK) failed to move with the times.

All this has seen Nokia slide from its place as the biggest, most traded stock in the EuroStoxx with a share price near $60 in June 2000 to its current position where investors are excited by the share price nearly doubling from $4.50!

So where to from here? The Reddit boom appears to be over with the NOK share price quickly collapsing back toward its starting point for the year. NOK is now only up 7% for 2021, closing on Friday at $4.22. Perhaps the fact that Nokia is not a heavily shorted stock compared to Gamestop, AMC, and others, precipitated the sharp decline.

Nokia reported modest results on Feb 4 with EPS and Revenue coming in mostly unchanged from a year earlier. NOK did not give any guidance for the year ahead.

NOK shares are back to their more recent range, having given up all gains fuelled by the /wallstreetbets phenomenon. Nokia was forced to issue a statement at the peak of the Reddit rally saying it had no reason for the surge in its share price and that its underlying business had not changed.

This alone should mean a return to long-term averages for NOK and results confirmed the trend with flat revenue and EPS.

So back to normality then! Support at $4.29 was broken on Friday. Next support at $3.85 is key to keeping the bullish tone intact. $5.14 is the first resistance to the upside, ignoring the crazy price action around Jan 27. The open on Jan 27 of $4.99 is also resistance, being the starting point for the explosion. MACD has crossed to give a bearish signal, the RSI is neutral. 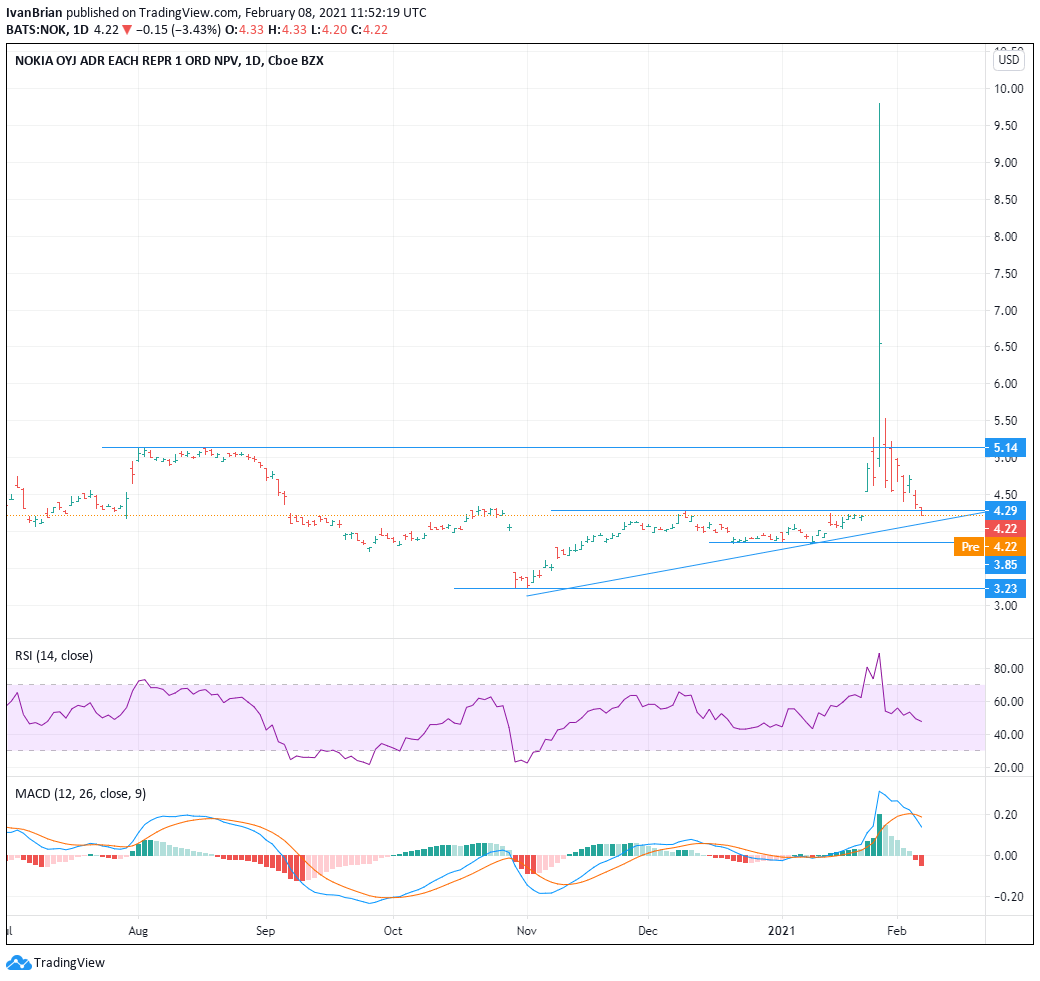