Update July 29: After crashing as much as 9% on Tuesday, NIO shares staged a blistering 6.305 recovery rally on Wednesday. The NIO stock rebounded firmly from two-month lows of $38.66 and tested $42 before closing the day at $41.84. The relief rally in NIO came on the back of a dovish Fed outcome and conciliatory articles from the Chinese state-run media, which helped to calm nerves after the recent rout in China’s stock market. NIO has recaptured the $40 threshold, but it remains to be seen if the renewed upswing could sustain going forward.

NIO stock continues to be stuck in a sideways range since retreating from a failure to break above resistance at $54.86 back in early July. Since then the stock has retreated as US and China tensions grow increasingly fractured and vociferous. Today we have the US Defense Secretary talking tough on confrontation, and China yesterday described relations between the two countries as being at a stalemate.

NIO shares are taking the news badly and are trading lower in Tuesday's premarket at $42.31, down 2%.

Added to the political backdrop has been increased regulatory concerns over Chinese stocks. It seems like a long time ago now, but the ANT Group IPO being pulled was merely the start of China taking an increasing interest in Chinese tech companies and the large amounts of data they handle. Jack Ma appearing to criticize Chinese leadership also played its part and was never going to end well. BABA shares took a beating on this and have yet to recover (see more).

China then took aim at DIDI, which had just launched on the stock market. This further shook investor's faith in the Chinese stocks listed in the US and the Invesco Golden Dragon Index has been in a one-way street lately. The exchange-traded fund (ETF) tracks some of the biggest Chinese companies listed in the US. Top holdings are NIO, JD.com, BABA, Baidu, Pinduodou, Bilibili and XPEV among others. The index is down over 20% in the last month as investors grow cautious over China. Cathie Wood of ARK Invest fame has certainly taken the country off the hotlist as her funds have been selling related stocks lately.

NIO has not been directly involved, but the overall picture is one of uncertainty. Markets hate uncertainty, so NIO has been suffering. China over the weekend said it would not allow for-profit tutoring in some core subjects, and a host of China education stocks took a beating on Monday. TAL Education (TAL), New Oriental (EDU) and Gaotu (GOTU) dropped over 20%. Tencent Music (TME) also found itself in the crosshairs as it was forced to give up exclusive digital music rights. "Even when you think China risk is priced, it can get worse," Goldman Sachs wrote in a research note.

Wow, this is getting increasingly tough to call. $40.48 is the small, short-term support, the low from July 19. Breaking it confirms the series of lower lows and so a downtrend. Holding it gives bulls some hope. Breaking $40.48 brings $33 as our next support zone to try, as this is where the recent run took off from. But use a stop as we are not too confident in this level based on the light volume here. FXStreet's preference is the zone at $27 as the volume is greater here.

Given the whole uncertainty around Chinese stocks right now, please have a stop in place to control your risk. 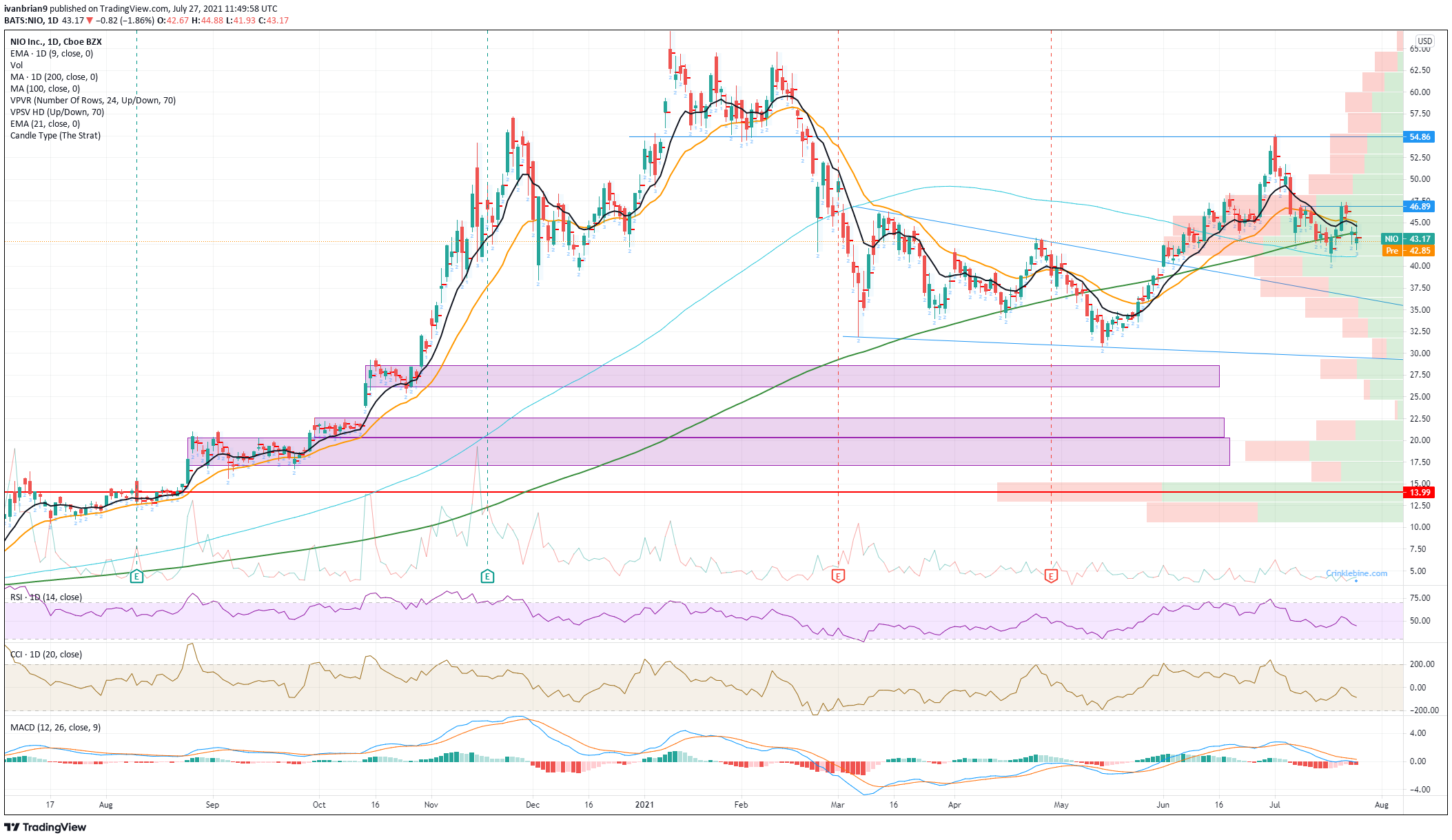 Update 3 July 28: NIO staged a huge recovery on Wednesday, closing up over 6% at $41.83. In the process breaking back above the $40 psychological level and retaking the 100-day moving average. The stock is still in a technicall downtrend with a series of lower highs and lower lows. It needs to break $46.89 to end this series. Most chinese names bounced sharply on Wednesday after heavy selling this week. Our view does not change despite this rally and will not do so until we break $46.89 and probably $48, above $48 volume thins out nicely so a move should accelerate.

Update July 28: NIO shares lost as much as 9% in Tuesday’s trading and hit the lowest in two months at $38.66 before recovering slightly to finish at $39.36. Heavy selling in Chinese internet giants, thanks to regulatory crackdowns in the education and property sectors, had a cascading effect on the likes of BABA, DIDI and now NIO. The overall downbeat momentum also added to the declines in NIO shares. The stock extended its corrective downside from near $50 levels, breaching the key $40 support area.

Update 2 July 27: The empire strikes back is continuing to play out across trading screens with a sea of red hitting Chinese names. The first installment in the trilogy was the ANT Group IPO being pulled, then DIDI and now the trilogy turns ugly with a further crackdown on education stocks spreading. NIO has now broken the $40.48 level and the volume profile is starting to look worrying for bulls. $30-32 was the staging point for the last rally and this is the first support but the volume profile suggests $27 is the stronger level.

Update July 27: Nio Inc - ADR (NYSE: NIO) has been extending its losses, dropping for the fourth consecutive day. While Tuesday's fall is a relatively minor 7%, the share price of $39.90 represents an accumulated drop of some 19% within the past month. Moreover, losing the round $40 level could encourage bears to extend their sell-off. The Chinese electric vehicle maker's stock is at the lowest levels since late May – a two-month trough. The main downside driver is China's efforts to rein in its tech sector, which has grown powerful, perhaps too much for authorities. Beijing's ire has mostly focused on education companies in the past few days, but investors fear everybody is vulnerable.