Update: NIO shares have opened Tuesday in the green despite some negative overnight news hitting Chinese tech names in Hong Kong. It would appear that investors are focusing instead on the Chinese car data which showed that sales growth is slowing but electric vehicle growth remains strong. China is the world's biggest car market. Wall Street analysts remain bullish and as mentioned Goldman has recently spoken bullishly on NIO stock. At the time of writing NIO is up 0.7% at $35.89.

NIO stock struggled to gain momentum on Monday despite some recent good news for the stock. Goldman Sachs upgraded NIO on Thursday last week with strong upside potential. Goldman put a $56 price target on NIO, a strong premium to current levels. Goldman was impressed by the potential for the new ET7 car from NIO, saying, "We believe Nio provides the visibility of strong volume expansion in the next six months, driven by the upcoming ET7 (China's priciest car model launched by a domestic brand), the Nio Day 2021 in Suzhou, the accelerating BAAS build-out, and the entrance into Norway." This had renewed interest in NIO, but so far the overhang of negative Chinese tech sentiment is holding the stock back. China is growing increasingly concerned over data and regulatory issues of its ever-growing tech companies and has been taking a much more in-depth regulatory overview on some names.

The latest delivery data from NIO was again demonstrative of strong growth. Q3 to the end of September 2021 saw a delivery increase of over 100% on the previous year. Nicholas Colas of DataTrek Research had a note out last week looking at the Chinese electric vehicle market. The report said the country remains on track to reach 25% of all vehicle sales being electric by 2025. China is well ahead of the US and Europe in terms of electric vehicle infrastructure, and Colas believes China has the potential to upend the European and US vehicle markets.

That may be so, but data out on Tuesday puts a slight headwind in front of auto manufacturers. China is the world's largest car market, but sales numbers for September were down nearly 20% versus a year earlier as automakers battle semiconductor chip shortages and supply chain bottlenecks. The sales drop was also due to the domestic power crunch caused partly by the shortage of coal, said Chen Shihua, a senior official at the China Association of Automobile Manufacturers (CAAM), according to Reuters. Chen Shihua did add however that chip issues had eased and supply is set to improve. The data overall was negative, but sales of new energy vehicles more than doubled in September. New energy is NIO's sector.

Clearly, NIO stock is beginning to crop up on more traders radars as the number of social media mentions has increased over the last week. NIO has been a retail favourite, but retail jumped ship once the Chinese crackdown set in. We have drawn our line in the sand at $36.78, if NIO can get above this it looks more bullish in our view.  Our call from last week has now been triggered: "What we need is a signal for this turnaround and the Relative Strength Index (RSI) breaking the downward trending line would be one or NIO staging a strong move above the 9-day moving average and closing above it would be another." As we can see from the daily chart the RSI has broken out and the MACD has crossed over. NIO is now above the 9-day moving average. Wall Street analysts see a near 60% upside to this one.

FXStreet View: Outperform. We are going with outperform rather than bullish as we are bearish on the overall market. A cop out? Maybe, bullish if NIO breaks $36.78. 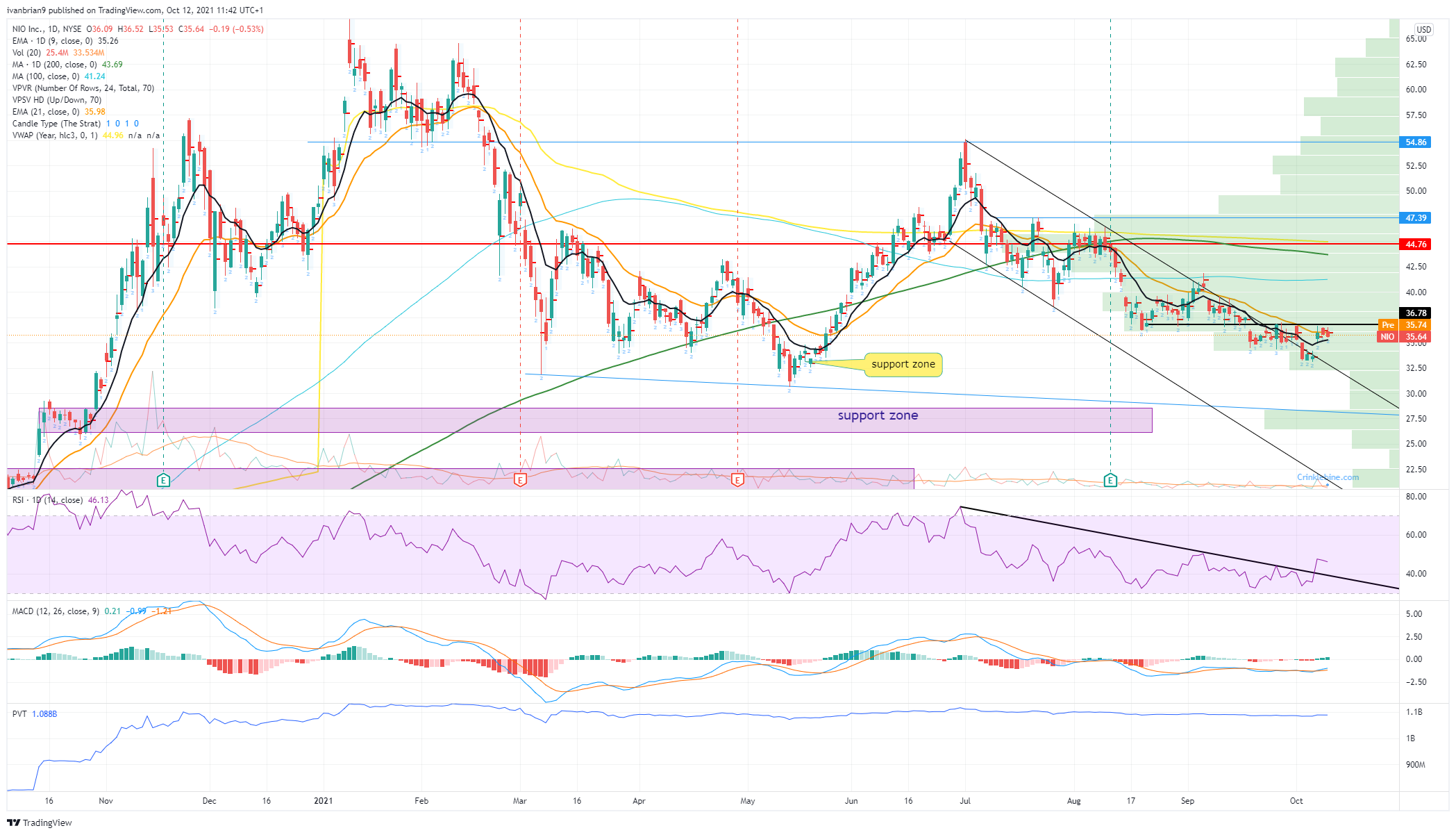