Microsoft is a technology company, need we say it! It is synonymous with most laptops and PCs as the underlying system and Microsft Edge is a popular internet browser. Microsoft also has significant cloud operations. Microsoft Teams has become essential for office workers working from home during the pandemic. While Zoom (ZOM) caught the imagination for social use, Microsoft Teams was the platform of choice for most workplaces. 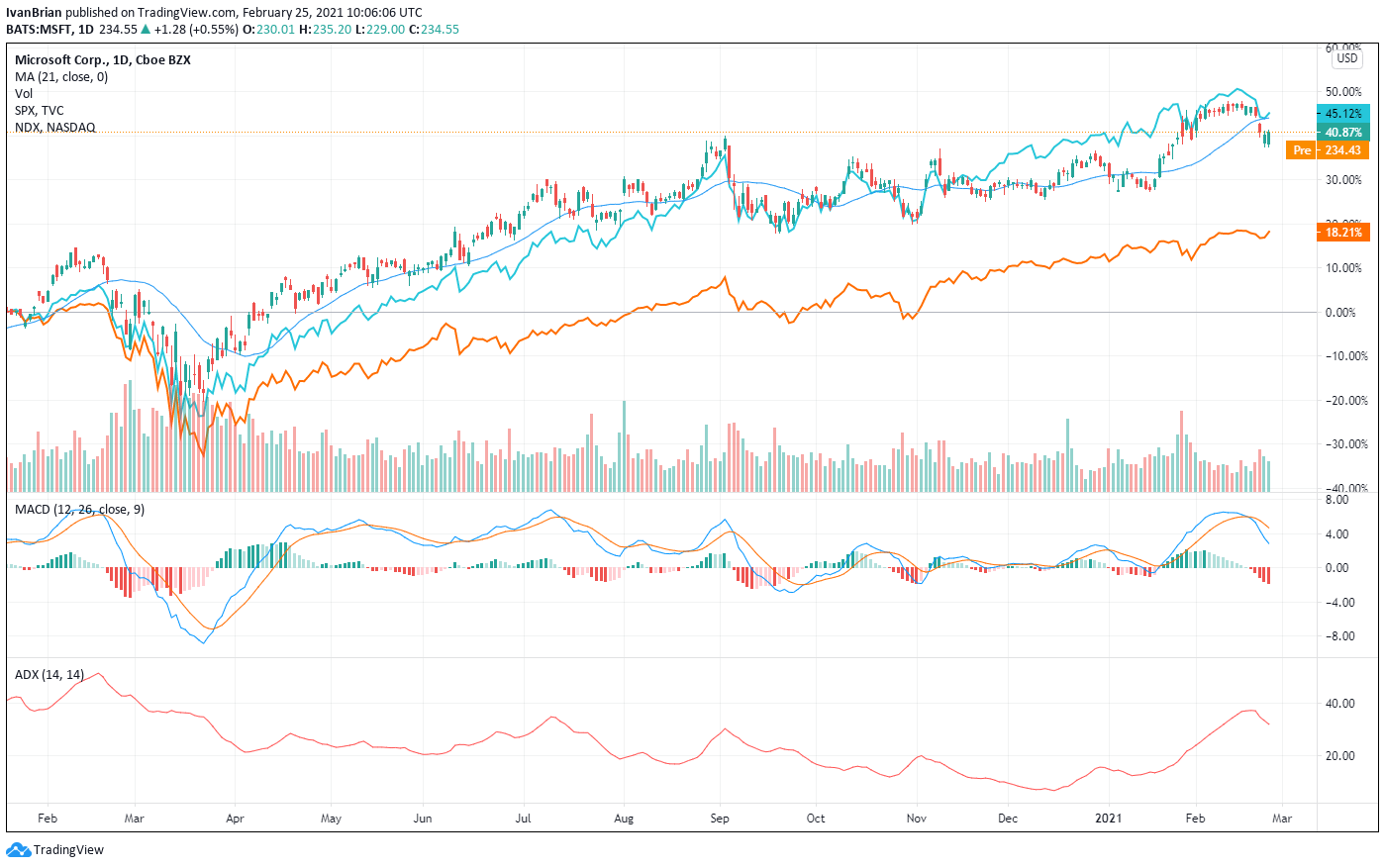 Microsoft has generally followed broader markets higher from the March lows, trending nicely with Nasdaq and S&P 500. While it may have lagged some of the more stellar performances in tech it has still returned positive gains to investors. Recently markets have seen weakness in tech names as investors look to take profits on those strong gains from the March 2020 lows. Investors have looked to switch into more cyclical, consumer-orientated names as the economy in the US and globally look set to reopen come H2 2021.

Inflation concerns have also played on investor's minds as the US 10 Year heads for a 1.5% yield, although Federal Reserve Chair Jerome Powell has done his best to dampen these fears for now.

All this had led to some bearishness creeping into the chart with MSFT losing the 21-day moving average which has held as support for most of 2021. MACD also gave a crossover sell signal, leading to two days of losses with MSFT moving from $243 to $228.

However, we now have a bullish engulfing candle from yesterday in most broader indices, and as can be seen, Microsoft is also looking more bullish on the chart. The first target would be to close the gap up to $240 and then regain the 21-day moving average.

While the chart may be looking slightly more bullish for Microsoft, the newsflow has been mixed. According to Reuters on Tuesday "Microsoft Corp MSFT.O has notified 60 customers that their data was likely compromised in the suspected Russian hacking campaign centered on Texas-based software firm SolarWinds Corp SWI.N, the company’s president told U.S. lawmakers on Tuesday". Microsoft has also been in the spotlight recently as part of the Facebook and Australia media content story. While Facebook and Australia did reach an agreement on content there were some difficulties along the way. Microsoft teamed up with EU publishing groups on Monday, Reuters reports that Microsoft and European media groups want the EU to require arbitration in any disagreements in revenue sharing with news publishers. Microsoft also teamed up with Adobe, BBC, Intel, ARM, and Truepic to try to create certain standards in order to negate misleading content.

While MSFT is a more established tech company and not in the hyper-growth stage, it has multiple strong revenue streams, solid management, and strong experience and knowledge of its industry. Moves by US and EU regulators, concerned about the impacts of Big Tech, may benefit Microsoft in so far it has not been in the crosshairs like other Big Tech companies have. EU lawmakers are due to discuss ways to rein in Big Tech as governments around the world try to adapt to the changing face of media. Microsoft may be ahead of the curve here and may avoid the glare of lawmakers scrutiny, giving it an edge over Big Tech rivals.