Moderna (MRNA) stock just cannot catch a bounce, even a dead cat one, as it falls on Thursday for the third straight session. Moderna shares closed 1.37% lower at $225.82. The stock has cratered this past week from $350. We mentioned yesterday that this looks worryingly like consolidation and the continuation pattern, and nothing yet has made us rethink that theory. The Moderna stock quote is now below the 200-day moving average and yearly Volume-Weighted Average Price (VWAP).

Moderna is fighting fires on many fronts. The last earnings were a miss on top and bottom lines. Earnings per share (EPS) and revenue both missed on the earnings release only last week. Added to this has been the development of antiviral pills for covid from both Merck (MRK) and Pfizer (PFE). Merck's pill has already been approved for use in the UK and the British government has orders in place. The US has also made some preorders for the drug. Pfizer was second to the party after Merck, but that is adding to pressure on vaccine makers with no complimentary business.

Pfizer now finds itself in the enviable position of offering both covid vaccines and potentially antiviral pills. Moderna looks like a one-trick pony by comparison, harsh perhaps, but the market is taking that view. The situation did not get any better for Moderna this week with both the French and German health regulators saying they prefer the Pfizer/BioNTech jab over Moderna for the under 30 population. This is due to concerns over heart-related problems with the French health authority saying, "Within the population aged under 30, this risk appears to be around five times lesser with Pfizer's Comirnaty jab compared to Moderna's Spikevax jab."

Just to cap things off The New York Times broke a story this week that the US government and Moderna were at loggerheads over the intellectual property rights of its Spikevax covid vaccine. Basically, the US National Institutes of Health played a significant role in developing Moderna's COVID-19 vaccine, and the agency intends to claim co-ownership of the patent. Moderna, of course, disagrees, so the dispute is headed to court most likely.

The chart is obviously reflecting the current bearish narrative on Moderna shares, and the move to consolidation looks likely to see more losses if our theory proves correct. Both the Moving Average Convergence Divergence (MACD) and Stochastics have given crossover sell signals. The Relative Strength Index (RSI) is oversold, but this period of consolidation may correct that without the need for a share price rise. Resistance at $254 from the 200-day moving average and $265 from the yearly Volume-Weighted Average Price (VWAP). Breaking those would change things and likely see MRNA push to fill the gap to $278. Above $278, the stock becomes neutral. The support at $157 looks the more likely target though in our view with $188.40 support along the way. 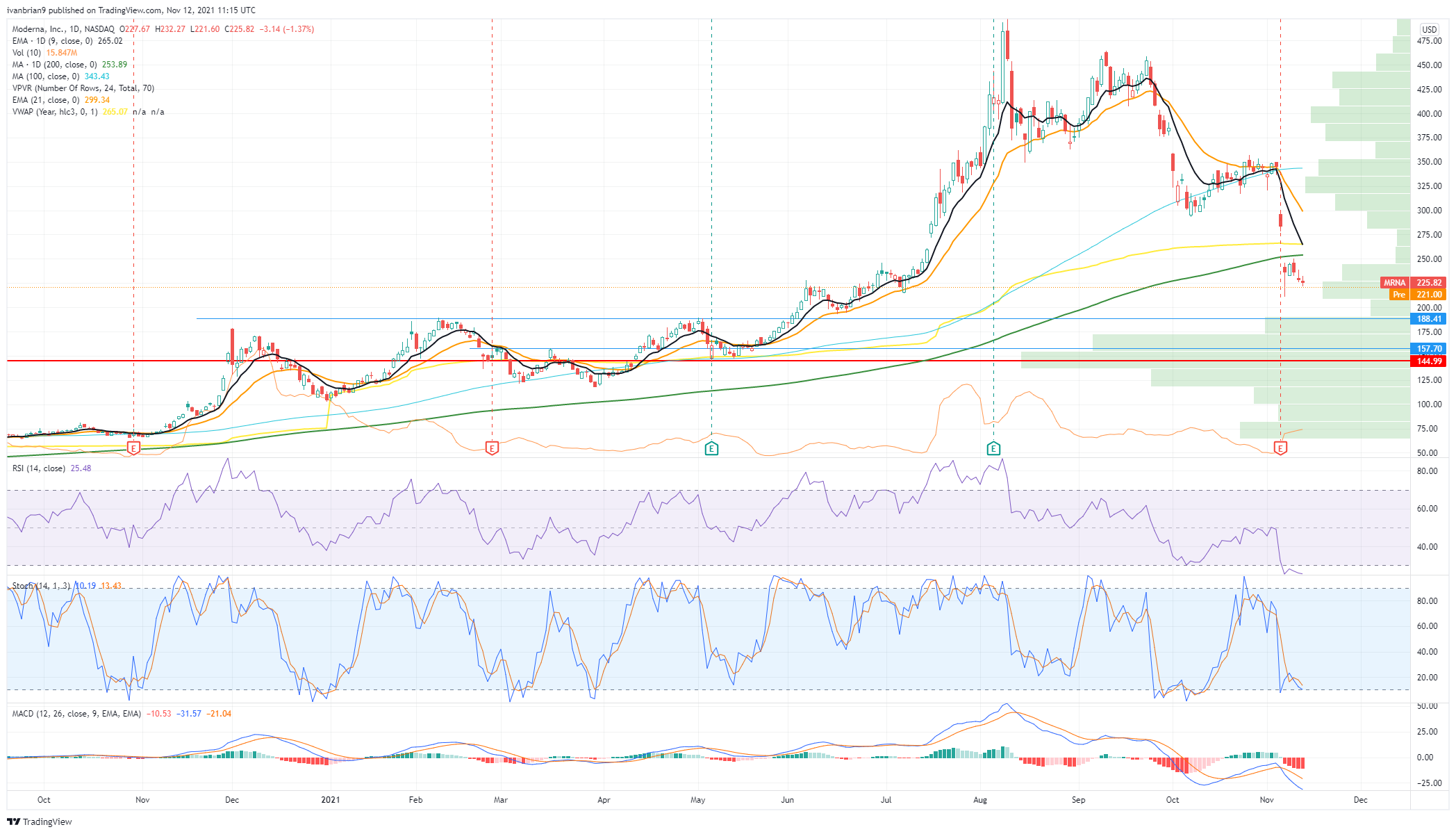