Microsoft (MSFT) released earnings last night after the close, and they were thankfully positive. Thankfully, since the big tech earnings releases could stem the bearish tide currently sweeping all equities before it. First, investors need the Fed meeting out of the way, and that happens this afternoon.

Tesla and Apple are also up this week. If those two can surprise to the upside as well, the trio will certainly make a powerful case for stemming the losses. We are assuming though that all goes smoothly with the Fed. We base that assumption on its track record of guiding markets and the fact that it has already caused this sell-off by taking a more hawkish approach. The Fed will have realized this correction was long overdue and healthy as bubble conditions were forming everywhere.

Now back to the matter at hand. Microsoft beat on both top and bottom lines. Earnings per share (EPS) came in at $2.48, beating the $2.31 estimate. Sales or revenue came in at $51.7 billion, ahead of the $50.88 billion estimate. The reaction was somewhat muted on the numbers as MSFT shares actually ticked a decent bit lower, down 4% afterhours. This was due to a combination of risk aversion and mostly the lack of outlook provided by the company. This was surprising as cloud services income rose sharply and other business areas also produced strong growth. Once the conference call began, however, things picked up.

Microsoft gave a strong outlook for the next quarter. Revenue was guided at $48.9 billion at the midpoint, which is ahead of previous analyst forecasts for $48.11 billion. In particular Microsoft sees cloud revenue of up to $19 billion for Q3. This led to a sharp turnaround in the stock. From being down 4%, it rallied up 3% on the guidance.

This is good news in our view. What transpired was a poor initial reaction due to a lack of guidance despite strong earnings numbers. The outlook turned things around, and this can continue once the Fed-induced risk aversion is over with. There is nothing to beat the stock up with that we can see. MSFT provided a strong earnings and strong outlook. Buybacks and dividend payouts also rose last year. This could in fact help turn the tide of sentiment across the broad equity space. So far, earnings season has been a disappointment.

We had already picked up on the potential double bottom, and we note yet again how MSFT spiked down to $277 on the earnings release. This was the spike low from the huge sell-off on Monday when the NASDAQ was down 5% before the massive turnaround. Microsoft again found quick and decisive buyers at this level and was unable to print much volume below $280. This puts in a strong bullish double bottom so long as $280 holds. We see no reason for it not to. The 200-day moving average at $293 will be the first target and then $318. 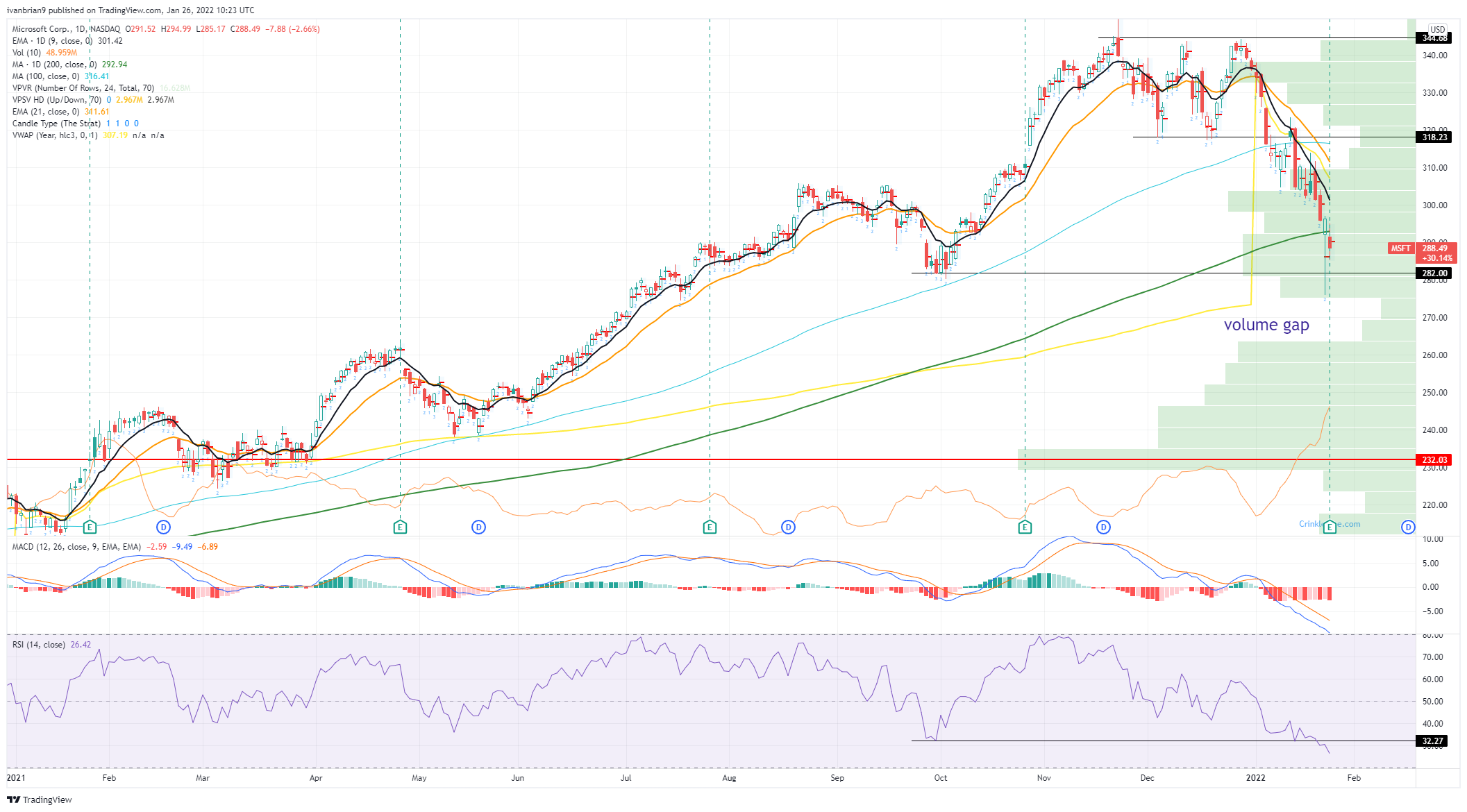