On February 2, 2022, the world’s largest online social media network, #Facebook.Inc (Meta), with a market cap of approximately $839.28 billion, is anticipated to disclose its fourth-quarter 2021 profits. Since changing its name from Facebook to Meta, the company, which is known for its products such as Facebook, WhatsApp, Instagram, Messenger and Oculus, has gone through several changes. 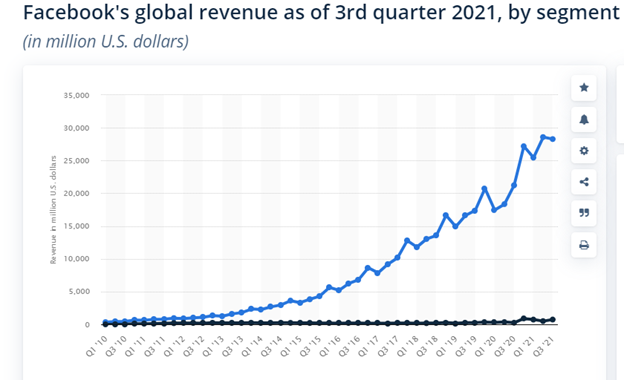 One of the FAANG companies, Facebook revealed results in the preceding quarter. Earnings per share (EPS) was above consensus projections, increasing 18.8% over the previous quarter’s EPS. MAUs on Facebook increased by 6% yearly to a little more than 2.9 billion.

MAUs are a fundamental metric used by Facebook to determine the size of its global active user base. MAUs for the whole family of apps (Facebook, Instagram, Messenger, and WhatsApp) were 3.58 billion, a 12% year-over-year rise and a 70 million quarter-over-quarter gain. Advertising revenue was $28.3 billion, an increase from the previous year but decrease from the previous quarter. Profits surpassed $10.4 billion, a new high for the corporation. 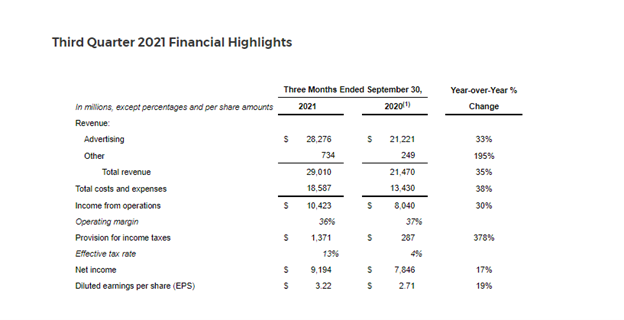 During the company’s third-quarter earnings call, CEO Mark Zuckerberg outlined a new direction for the company, declaring a significant $10 billion investment in Meta, with additional costs to come in subsequent years, a transformation in how the company reports earnings, and, most importantly, a new strategic North Star. The release of Facebook’s third-quarter results came amid increased scrutiny from the media, legislators, and regulators of the powerful company’s purported damages. In the last few weeks, Facebook has faced a surge of negative publicity due to allegations made by whistleblowers who disclosed internal papers to media outlets, portraying the business as favoring profits before safety.

Facebook anticipates overall revenue of $31.5 billion to $34 billion for the fourth quarter, representing a year-over-year increase of 12%-21%. The outlook includes the severe uncertainty faced in the fourth quarter due to Apple’s iOS 14 revisions and macroeconomic and COVID-related issues. 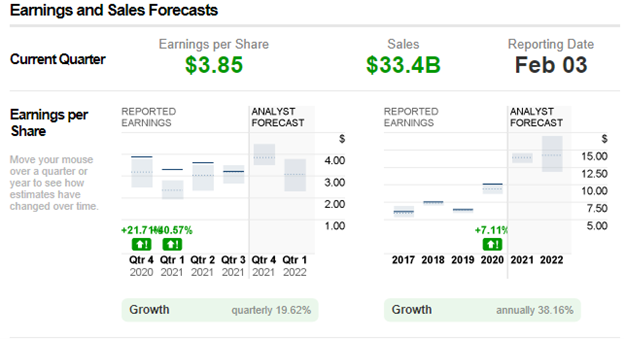 For the forthcoming Q4 earnings report, the market generally expects sales of $33.4 billion, while earnings per share (EPS) is expected to reach $3.85. The current consensus of analysts maintains a “buy” rating on the company. Brian White, a Wall Street Analyst, expects Sales projection of $33.09 billion – equating to an 18% year-over-year growth – and EPS expectation of $3.73.

Meta expects overall costs in 2021 to be in the region of $70-71 billion, updated from their previous estimate of $70-73 billion. It forecasts total spending in the region of $91-97 billion for the fiscal year 2022, driven by investments in technology and product expertise as well as infrastructure-related costs.

The start of 2022 hasn’t been pleasant for Meta (FB.) The stock has been plummeting since December 28, when it reached a monthly high of 352. The selling pressure continued at the turn of the year, and it broke the previous support of 322.

On January 26, the stock hit a low of 289, the level it last reached on March 2021. The resistance levels 327 and 343 are important for the stock to continue the upward movement. If the stock breaks above these levels, it may reach 352 or even cross that level. Oppositely, if the stock goes below 280, it could tank towards 250, the level seen in January 2021.

All the indicators suggest a downward trajectory of the stock. The RSI and MACD are pointing downwards on the daily chart, and the 100-day Moving Average is above the price level.