Lordstown Motors (NASDAQ: RIDE) continues to take its investors on a bumpy RIDE of late (excuse the pun). The shares dumped on Tuesday as an SEC filing showed the company is not sure if it can continue as a going concern and needs extra cash if it is to begin production. During the company's last results release on May 24, the company said, "We need to raise additional capital to complete our business plans and have begun those discussions." The SEC filing went slightly further and was a stronger statement: "The company believes that its current level of cash and cash equivalents are not sufficient to fund commercial scale production and the launch of sale of such vehicles. [...] These conditions raise substantial doubt regarding our ability to continue as a going concern for a period of at least one year."

Raising additional capital is the key then apparently to the future success of the business. This capital raise will have widespread implications for the future of the SPAC industry as Lordstown went public via a SPAC deal. There would also be read-across from other startup electric vehicle manufacturers. Capital raising is proving remarkably easy at present with companies rushing to take advantage of the increasing demand for yield in a zero rate, Fed-boosted economy. If RIDE is unable to raise fresh capital, it may signal things are tightening or just that investors do not believe in the future of Lordstown. GM has a minority stake in RIDE.

Negative news has been met with a positive reaction many times before in financial markets, and RIDE managed this feat back on May 24 when it first made comments about the need to raise cash for its future. The stock suffered a one-day fall of 7% before going on a 60% surge over the next few sessions. It should be noted that despite Tuesday's sharp fall, RIDE shares are still over 30% higher than the May 25 post-earnings low.

While the news is not exactly unexpected or new given the results dialogue, the message was perhaps a bit stronger and talk of the future of the company was new and clearly spooked investors. However, the basic fact remains the same, Lordstown needs cash if it is to survive. This is the easiest time in the last 50 years to raise cash. That is what you are trading, speculating on. The long-term outlook is tough. Even if RIDE does raise the cash, it faces growing competition and question marks over its business plan. For the short-term trader though, if RIDE raises cash, it buys time and the ability to at least have a shot at producing its product.

The chart still looks reasonable as the shares stopped short of breaking the 21-day moving average. The momentum indicators were starting to look stretched, but are now back in neutral territory. Tuesday's move also coincided with topping out at the 100-day moving average resistance. A small beginner uptrend had been in place with some support found at $10.67. This is not strong though. $6.75 remains the key level. A break below is strongly bearish. There is some support from $8, but again this is not very strong. A funding announcement would likely be seized upon since this one is a retail favourite and a surge could be expected.

This may be best played if this is your view by buying some far out-of-the-money call options. As volatility is high, buying options is expensive, so selling a further out-of-the-money call (i.e. a bullish call spread) will help offset the cost and effects of theta (time decay). Time decay is the amount an option loses in value every day it gets nearer to the expiry date. A strangle may offer better profit potential as the volatility in the stock is high and any news flow is likely to see a large move in either direction. A strangle involves buying an out-of-the-money call and put. If the price moves sharply up or down one option leg will show a large profit. 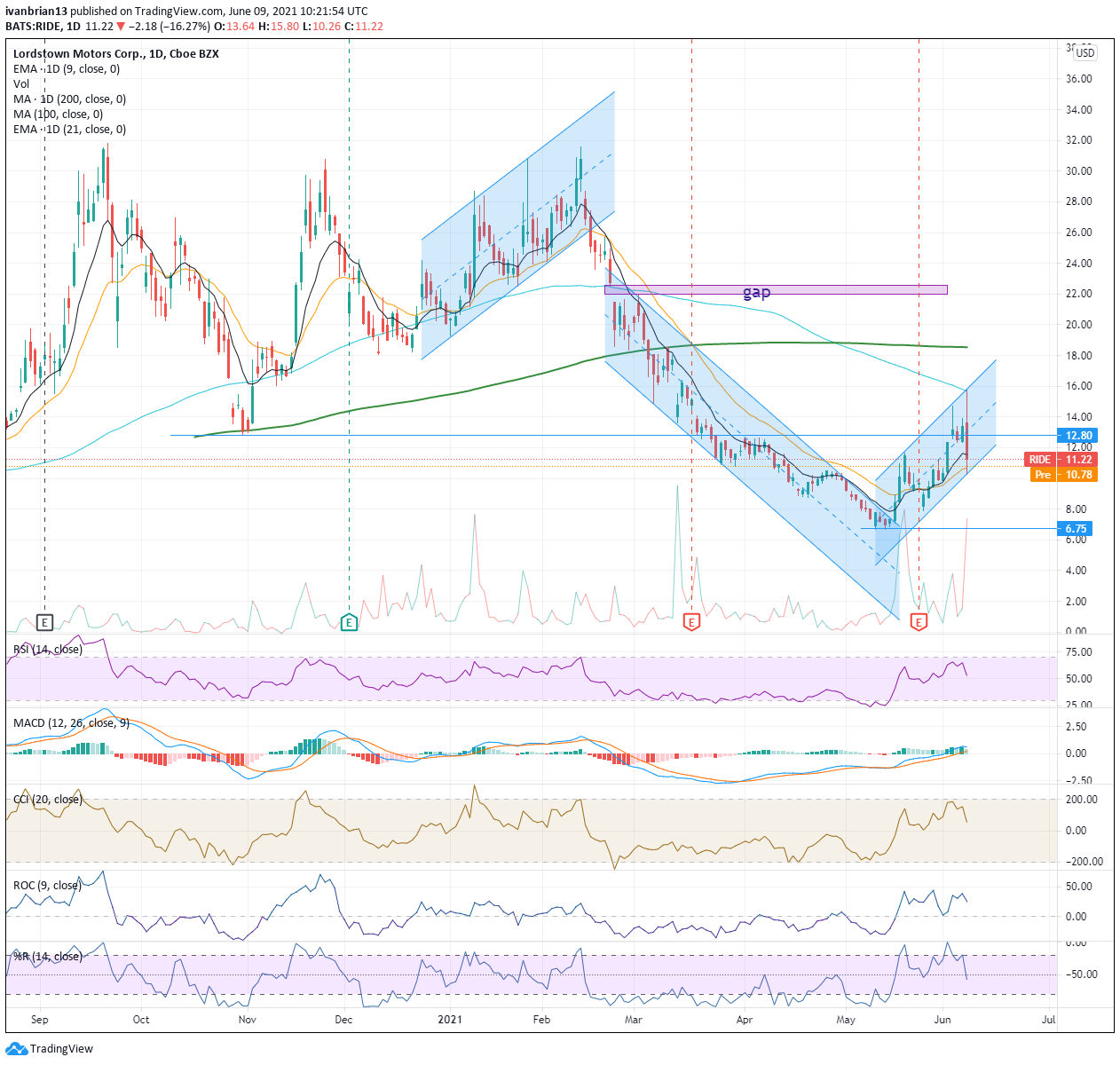