Gold price (XAU/USD) reverses the from the monthly top, snapping two-day uptrend, as the sellers attack the $1,790 mark during early Wednesday morning in Europe. In doing so, the precious metal portrays the market’s anxiety ahead of the US inflation statistics, amid increasing hawkish bets on the US Federal Reserve’s (Fed) next move.

Other than the pre-CPI caution, the fears of economic slowdown also weigh on the XAU/USD prices. That said, fears of economic slowdown escalated after Russia announced a stoppage of oil flow, due to a halt in the Druzhba pipeline supplying the black gold. “Russia reportedly suspended oil flows via the southern leg of the Druzhba pipeline, amid transit payment issues,” said Reuters.

On the other hand, chatters that the US tax, climate and health-care bill won’t be able to tame recession woes, as per JP Morgan, also weigh on the bullion prices. “The bill passed the Senate on Sunday and is headed for the House on Friday, puts a slimmed-down version of President Joe Biden’s domestic agenda on a path to becoming law after a year of Democratic infighting that the White House was unable to control,” said analysts from the US bank per Bloomberg.

Elsewhere, firmer prints of the second-tier US data and hawkish Fedspeak also played their role in marking the risk-off mood and challenging the XAU/USD buyers.

On Tuesday, US Nonfarm Productivity improved to -4.6% during the second quarter (Q2), -4.7% expected and -7.4% prior, whereas the Unit Labor Cost increased to 10.8% from 12.7% prior and 9.5% market consensus during the said period. Additionally, St. Louis Fed President James Bullard said on Tuesday that he wants rates at 4% by the end of the year. This joins recently firmer interest rate futures suggesting nearly 70% odds favoring the 75 basis points (bps) of a Fed rate hike in September.

Against this backdrop, the US 10-year Treasury yields struggle to extend the previous day’s rebound to 2.79%, around 2.786% by the press time. Also portraying the sluggish market is the S&P 500 Futures that remains unchanged at 4,125 at the latest, despite Wall Street’s losses.

Gold price remains above the $1,785 support confluence despite the recent pullback from a one-month-high. Also teasing the XAU/USD buyers is the firmer RSI (14), not overbought, as well as bullish MACD signals.

That said, the 50-DMA joins the previous resistance line from March and a three-week-old ascending trend line to highlight the $1,785 as crucial support, a break of which could quickly drag the metal prices towards the previous weekly low near $1,754.

On the contrary, June’s bottom surrounding $1,805 could lure XAU/USD buyers during the quote’s fresh upside moves. Following that, the 38.2% and 50% Fibonacci retracement levels of the March-July downturn, close to $1,830 and $1,875 in that order, might gain the gold bull’s attention.

Overall, gold is likely to remain firmer until the quote stays beyond $1,785. 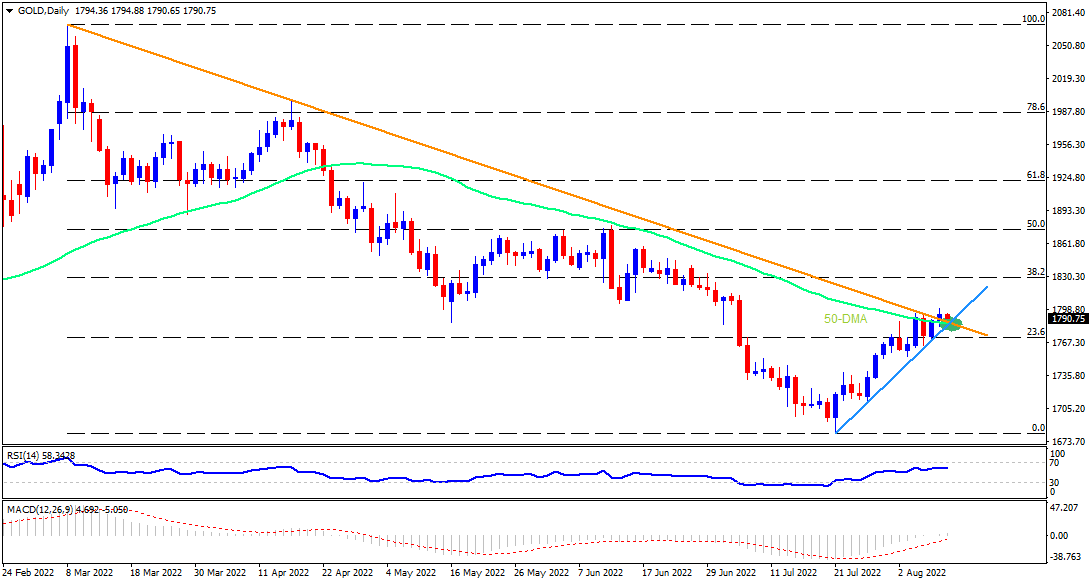