The gold price is back to flat in the close on Wall Street following a move in the US dollar and yields that have shaken out some weak hands that have been positioned short in the greenback. The market backdrop has turned increasingly risk-friendly over the past two days which has supported the yellow metal with sentiment reflecting some upside in growth indicators and the downside of inflation pressures.

However, at the time of writing, the greenback is moving higher on the 4-hour charts in a solid correction of the inflation blowout as markets take some time out to look ahead. Thursday's Producer Price Index sent similar signals to that of Wednesday's CPI and embedded the hope that the Federal Reserve will be able to cool down price growth without shoving the economy into the deep freeze of recession.

July PPI month-over-month and year-over-year came in below expectations. In fact, the month-over-month reading was actually negative. Core readings were below the Reuters poll on a month-over-month basis and in-line on a year-over-year basis. The report lessened the prospects of the Fed up interest rates by 75 basis points for the third time in a row at the conclusion of its September policy meeting. Instead, CME Fed funds futures now predict a smaller 50 bp rate hike by nearly two to one.

The markets were digesting the recent Consumer Price Index and PPI outcomes that came in below expectations, taking on board subsequent comments made by Federal Reserve officials also.

Fed officials spoke after the inflation data this week. For instance, following yesterday's CPI, Neel Kashkari unleashed his inner hawk and said the July CPI data did not change his expected rate path, though he was happy to see inflation surprise to the downside. Kashkari stressed that the Fed is far from declaring victory over inflation and stressed that recession “will not deter me” from getting to the 2% target.

Today, Mary Daly, President of the San Francisco Fed did not rule out a third consecutive 0.75 percentage point rate rise at the central bank’s next policy meeting in September, although she signalled her initial support for the Fed to slow the pace of its interest rate increases, the Financial Times reported. "We have a lot of work to do. I just don’t want to do it so reactively that we find ourselves spoiling the labour market," the central banker said while also indicating that she would be watching the next consumer price and non-farm payroll reports to better calibrate her decision.

On Wall Street, heading towards the final hour of trade, stocks had turned over easing earlier gains as investors figure that the one-month data is not enough to start calling peak inflation. As a consequence, after adding more than 2% on Wednesday and rising more than 1% to a 3-month high earlier on Thursday, the S&P 500 edged 0.1% lower to 4,207.32 and the Nasdaq Composite was 0.6% lower at 12,779.91. The Dow Jones Industrial Average rose 0.1% to 33,336.67.

Commenting on the US dollar and in light of yesterday's CPI data, analysts at Brown Brothers Harriman said, ''we stress that there is a lot of noise right now even as markets remain thin during the summer months.''

''We are likely to continue seeing violent moves in the markets in the coming weeks as markets continue to struggle to find a stable and sustainable macro outlook to trade on.

Analysts at TD Securities argued that the recent downside miss of US core inflation underscores that we have likely seen the peak of inflation and perhaps the stagflation concerns. Even so, however, they ''don't think that risk assets are out of the woods yet, suggesting it could a bit more time to expect a persistent, positive boost in growth expectations and financial conditions.''

''A potential inflation peak (and associated end to Fed terminal rate price discovery) is an important ingredient to call the top in the USD. The other key (and arguably) more important ingredient is the outlook for global growth. On that factor, we don't think it is time to completely fade the USD, though the recent backdrop reductions convictions on USD long exposure,'' the analysts explained.

Meanwhile, the analysts at TD Securities said that the gold sellers are lurking.

''Gold's failure to break north of a key threshold for substantial short covering from CTA trend followers amid a miss in the highly anticipated US inflation data may be pointing to significant selling interest. After all, strong physical demand may have exacerbated the short covering rally sparked by Chair Powell's FOMC speech, but we see evidence that the Chinese bid in gold continues to unwind.''

''Prices now need to break north of $1830/oz to catalyze a buying program from trend followers. Ultimately, prop traders are still holding a massive amount of complacent length, suggesting we have yet to see capitulation in gold, which argues that the pain trade remains to the downside.'' 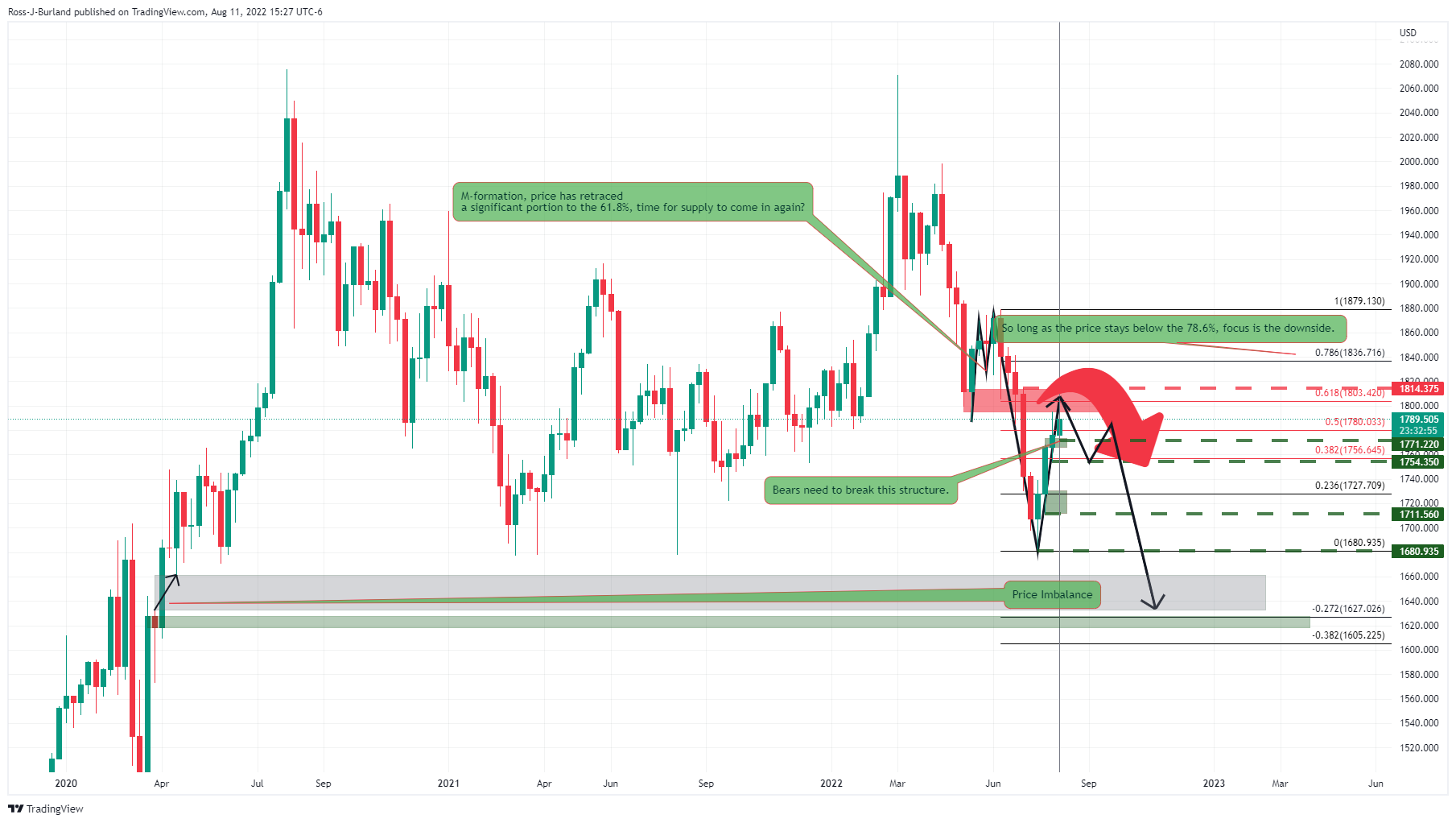 As illustrated, the price has run up to the 61.8% golden ratio where some profit taking would be expected to occur. A build-up of supply could pick up over the course of the coming days and weeks ahead resulting in a topping of this correction of the M-formation's bearish leg.