Gold (XAU/USD) is extending its corrective decline from seven-week highs of $1790 reached on Monday. The rebound in the US Treasury yields serves as a key driver for the pullback in the non-yielding gold, which offsets the impact of the sagging dollar. US President Joe Biden’s efforts to seek a deal on his $2.25 trillion infrastructure proposal revived the buying interest around the yields. The global covid vaccine optimism also collaborated with the uptick in the US rates.

How is the metal positioned on the technical charts?

The Technical Confluences Detector shows that gold’s pullback is testing minor support around $1766, which is the convergence of the previous day low and Bollinger Band four-hour middle.

Defending the $1761 cushion is critical for the XAU bulls. At that point, the SMA100 one-hour coincides with the Fibonacci 38.2% one-week and the previous month high.

On the flip side, recapturing the $1771 hurdle (Fibonacci 23.6% one-week) could bring the $1777 resistance back in the play. The latter is the intersection of the Fibonacci 38.2% one-day and SMA10 four-hour.

Further up, the previous week high of $1784 could challenge the bullish traders, as they look to retest the multi-week tops clinched a day before. 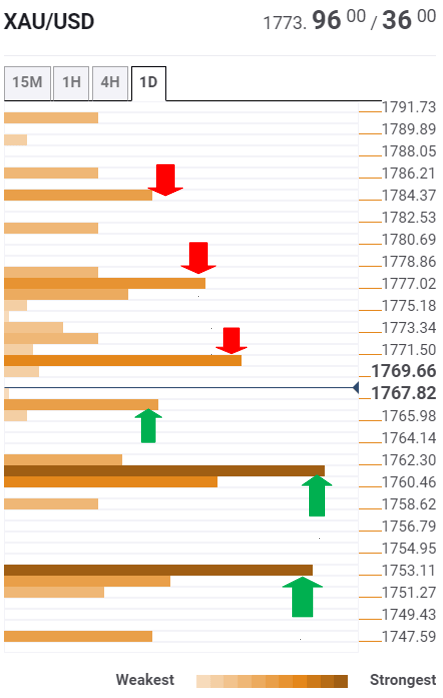 The TCD (Technical Confluences Detector) is a tool to locate and point out those price levels where there is a congestion of indicators, moving averages, Fibonacci levels, Pivot Points, etc. Knowing where these congestion points are located is very useful for the trader, and can be used as a basis for different strategies.