In the spotlight: Wells Fargo, Bank of America, Citigroup, Blackrock

This week the key Q2 Earnings season kicks off in earnest, with many of the major US banks reporting and expected to massively beat consensus, something that could please the bulls. But will this be the case? And if yes, then what? Wall Street has remained in rally mode and at record highs, ahead of what is expected to be a strong Q2 earnings season. As the chief investment strategist at CFRA Research, Sam Stovall, told CNBC’s Trading Nation on Friday: “I think what we’re going to be seeing is the second-best year-on-year quarterly gain in the last 25 years, second only to what we saw in the fourth quarter of 2009, since USA500 earnings are expected to be almost 61% this quarter”.

Q2 earnings are seen as key for setting the tone of company performances as the spread of the Delta Covid variant will likely continue, with countries like the Netherlands reporting an 800% increase in cases over the past week, hence fears that economic growth could plateau, and slowing vaccination rates globally keeping investors cautious over high valuations. Overall the US equity markets notched further all-time highs with a strong close yesterday as strong economic data keeps recovery hopes alive.

The Financial sector has been a major beneficiary of the “reflation” trade since last year and the Stimulus Bill and the Infrastructure Bill, which also benefited and could continue benefiting the banking sector in particular. So far the financial sector posted 34.5% earnings growth in the first Quarter of 2021 while Q2 is projected an amazing 117% earnings per share growth for Financials in Q2, according to research firm FactSet.  That’s the 3rd highest projection FactSet has on a sector basis. A key concern is a potential decline in “special purpose acquisition companies” (SPACs) activity during Q2 might also have hurt the sector.

The Bank of America (#BankofAmerica OR BOA) consensus recommendation is “Buy”, as revenues are expected to beat as earnings are likely to exceed according to the majority of the consensus recommendations from the Eikon Reuters terminal. According to Reuters Eikon Research, the report for the fiscal Quarter ending June 2021 is expected to experience a near quarter rally of its Earnings Per Share (EPS) compared to last year, at $0.77 from $0.37, which implies a mean change of 0.41% and a year-over-year growth of 107.9%. Zacks Investment Research predicts similar EPS, while the company’s revenue is seen depreciating slightly from a year ago to $21.83 billion, down by 2.16%  on a yearly basis.

Please note that BOA, the nation’s second-largest bank,  has surpassed earnings forecasts in the last two quarters due to strong growth in its sales & trading and investment banking businesses, regardless the company’s revenues have dropped since 2020 due to net interest income decrease. The net interest income, which contributes more than 50% of the total revenues, was down due to the interest rate headwinds and lower new loan issuance. Further, the same factors are likely to continue supporting solid growth for the bank’s sales, trading and investment banking for the rest of the year but the interest rates are likely to remain low on the resurgence of rising Covid-19 cases.

In regards to Citigroup now, things are similar to BOA as the bank is expected to post a beat on Earning ESP but a slowdown on consumer banking revenues. Similar to Q1 2021, the factors that are anticipated to affect the financial report for Q2 are:

Hence Citigroup is expected to report adjusted earnings of $1.96, in comparison with the $0.50 EPS reported for the same quarter last year. The revenue is seen at $17.20 billion, according to Eikon group analysts estimates, nearly 11% lower than Q1 2021.

From a technical perspective, whatever the outcomes are, much is anticipated from the numbers of Bank of America and Citigroup, as both banks are expected to outperform the consensus estimates for earnings, even though revenues are likely to fall short of expectations. Both banks remain technically Bullish in the medium term, trading north of their respective 20- and 50-week EMAs, even though a strong pullback has been seen in June. Today #Citigroup is at the $69 area, stabilising the past 5 weeks above the 50-week EMA finding a support at the $65.80 level suggesting that the correction might run out of steam. #BankofAmerica is at $40.59, above the double bottom seen at $38.47  as positively configured momentum indicators suggest that the outlook remains positive. 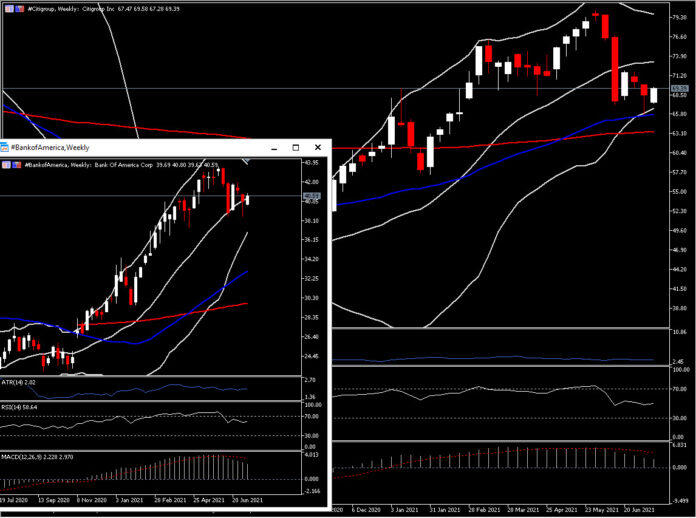 Finally, Wells Fargo and Blackrock, which are the fourth and fifth largest US banks, are expected to slate strong Q2 earnings reports, after the first posted its first loss since the global financial crisis of 2008 and  the latter has a solid history of beating earnings estimates while it is well seated to hold a positive trend in its Q2 report.

Wells Fargo could post an EPS of $0.97 and revenues of $17.75 billion. The #Wells Fargo price sustains a move above the 20-week SMA for a 2nd week in a row, after the rebound from the $41 low. Momentum indicators and their positive to neutral configuration along with the sustained a move with a 1-year upward channel imply a positive medium term outlook for the stock price. 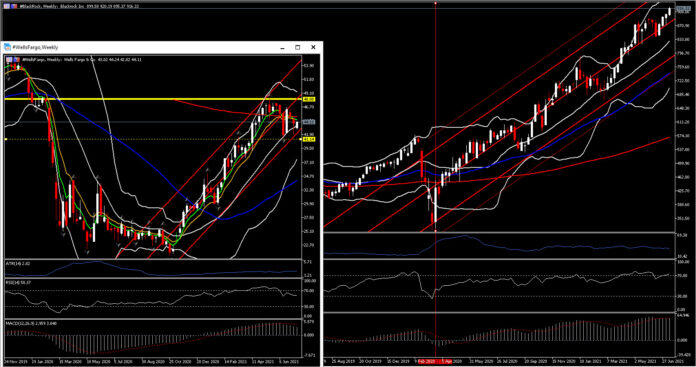 Blackrock on the other hand, in contrast with the other 3, has had a remarkably strong performance since March 2020 without a notable pullback on stock price in 2021, while it is currently trading at  record highs. According to Eikon Reuters, the world’s largest asset manager is expected to report adjusted earnings of $9.36, in comparison with the $7.85 EPS reported for the same quarter last year. The revenue is seen at $4.605 billion, according to Eikon group analysts estimates, which is more than 25% growth since Q2 2020. Hence a beat of estimates could boost the stock to fresh all time highs.

Nevertheless, the US bank stocks have enjoyed a strong rally in 2021, clearly seen from US major indices such as USA30 which is up 92% since the 2020 bottom and up 33%YTD, due to the continued boost from massive stimulus packages, positive vaccination rollout, and the accomodative Fed’s policy. Based on Refinitiv estimates, together, Wells Fargo, Bank of America, Citigroup and JPMorgan are anticipated to report profits of $24 billion in Q2 2021, up significantly from the $6 billion seen last year.