NYSE:GME investors did not have the start to the week that they were anticipating after mostly positive movement over the past three weeks. On Monday, the first trading day after the recent $1.9 trillion stimulus package began to make its way to investors, GameStop plunged by 16.77% to close the trading session at $220.14. Shares were momentarily halted at one point due to a massive spike in volatility that caused GameStop to fall by nearly 20% within a few minutes. It is definitely not the first time that GameStop has been halted due to trading volatility, but it is interesting to note that Monday’s drop came with half of its normal average trading volume.

Now former Chewy(NYSE:CHWY) founder Ryan Cohen is heading a special task force to rebuild GameStop into an eCommerce platform to take on the likes of Amazon (NASDAQ:AMZN). While this is obviously a daunting task and at this point seems a little far fetched, there is definitely positive investor sentiment surrounding the news. GameStop will eventually need to remove the ‘meme stock label’ before being taken seriously as a viable eCommerce business once again. 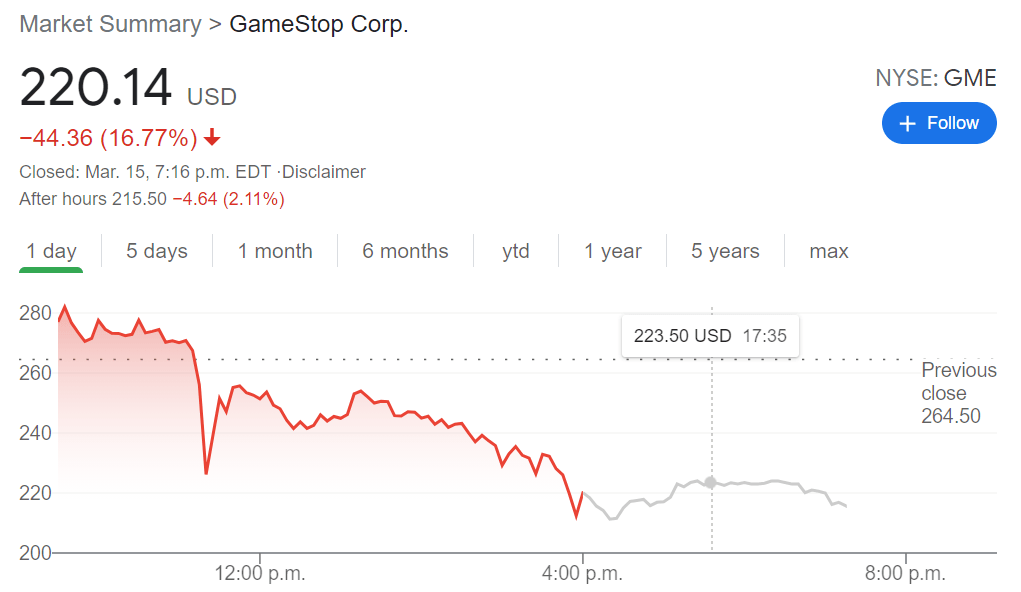 Another meme stock, AMC (NYSE:AMC) headed in the opposite direction from GameStop on Monday as reopening orders in the state of California means that all 53 locations may be open by the end of the week. AMC’s stock surged by over 26% on Monday to close the day at $14.04, it’s highest price since the short squeeze event in late January.