Shares of Lucid Group (NASDAQ: LCID), formerly known as the SPAC Churchill Capital (CCIV), continue to disappoint loyal investors as the electric vehicle sector took a bit of a hit this week. Tesla has been the main culprit with Reuters reporting on two potentially negative news stories that have hit the Tesla share price pretty hard. First, it was news of Tesla's autopilot system being investigated by the National Highway Traffic Safety Administration (NHTSA). The situation worsened on Wednesday when reports appeared that two US senators want the Federal Trade Commission to investigate Tesla.

"Tesla and Musk’s repeated overstatements of their vehicle’s capabilities...put Tesla drivers – and all of the traveling public – at risk of serious injury or death," Senate Democrats Richard Blumenthal and Edward Markey said in a letter to newly appointed FTC Chair Lina Khan. Tesla stock understandably fell sharply on Monday and Tuesday, and where Tesla goes other electric vehicle stocks tend to follow.

Lucid Group closed on Tuesday at $22.56, breaking out of the long term uptrend channel and in the process hitting the point of control at $22.43. The point of control is the price at which the highest volume has occurred – an equilibrium of sorts.

We will use both tickers for now as the old Churchill Capital still garners some attention despite the recent name and ticker change. The nice uptrend channel now looks to be in jeopardy after Tuesday's break lower. Not a definite move just yet and it may turn out to be a buy-the-dip opportunity. The low at $20.90 from July 19 is the level we really want to see holding. Otherwise this will be a lower low and end the bullish trend. Failure to break this, and we can start to dream of higher prices again. Tesla will set the tone for the sector as ever and in particular with the news flow surrounding that one. We wrote earlier that it may be time to test a buy the dip strategy in Tesla (see here). If so, then that should follow through with Lucid also.

Buying dips is always tricky, but if the long-term trend is in your favour, then it should make things easier. Lucid needs to break the short-term 9-day moving average at $23.38 and then the high from late July at $29.03 can be targeted. Buying around current levels sub-$23 means using a break of $20.90 as your stop, as we mentioned that this ends any bullish sentiment. 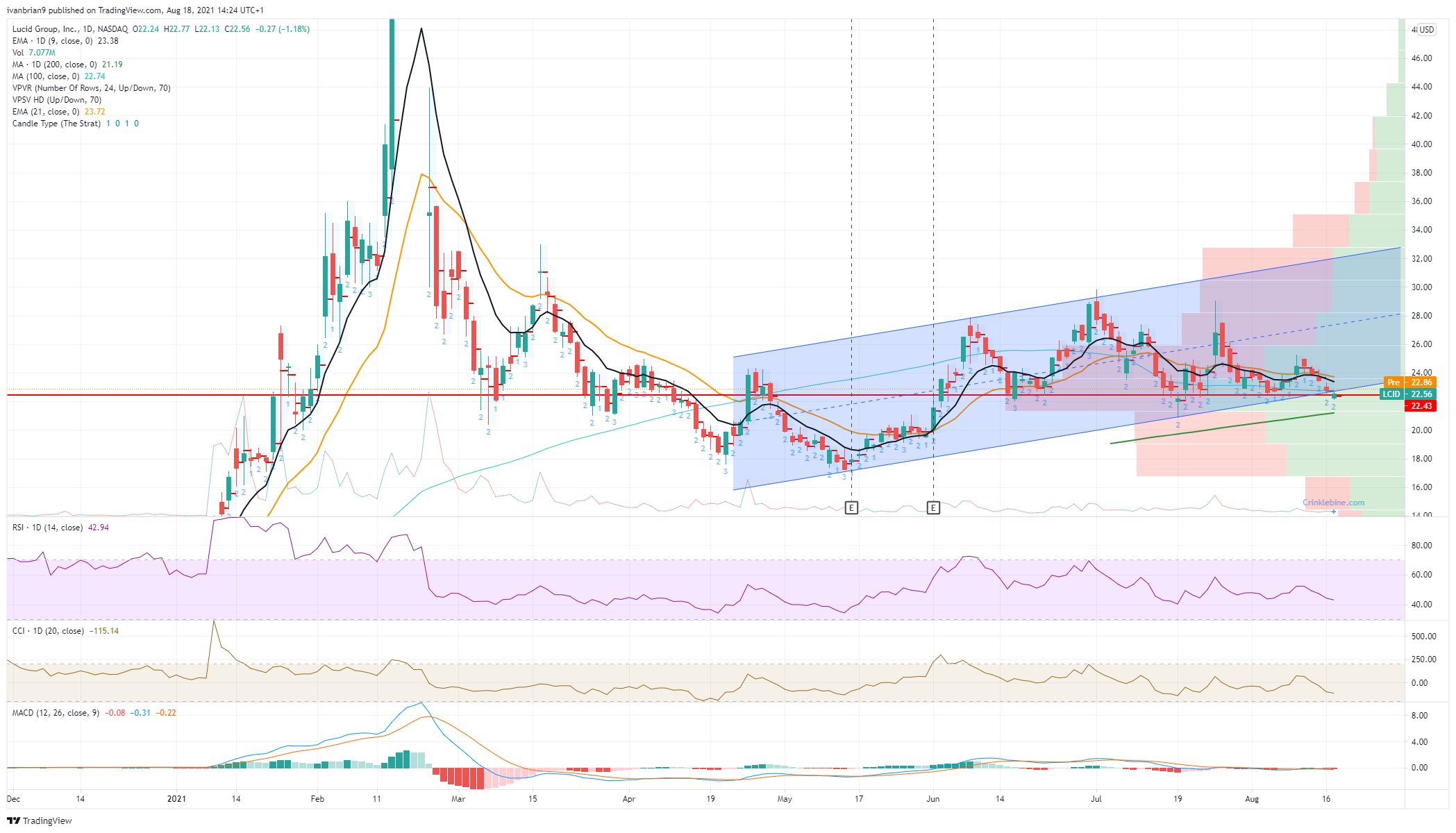