Update July 15: Shares of Churchill Capital IV Corp (NYSE: CCIV) was unable to hold on to early gains and finished yet another day in the red. The share lost 3.45% on Thursday, to finish at $22.96 per share, after bottoming for the day at $22.56. Several factors combined to send Wall Street lower. Chinese growth data missed the market's expectations, US Federal Reserve chief Jerome Powell reiterated its dovish message, while the Delta variant keeps spreading rapidly. The sour mood will likely continue heading into the weekend, maintaining stocks under selling pressure. 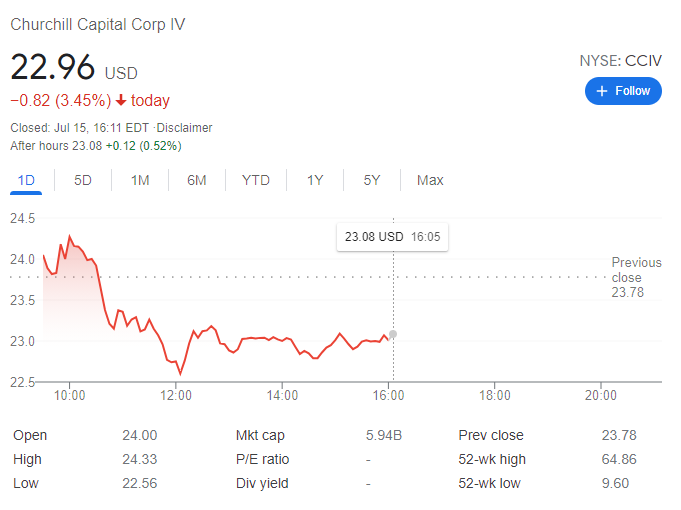 Previous update: Recovery time? Shares of Churchill Capital IV Corp (NYSE: CCIV) has kicked off Thursday's trading session with a minor bump up above Wednesday's depressed closing level of $23.79, a sharp 8%  downfall. Eight days are left until the merger with Lucid Motors is finalized and CCIV changes to LCID. Investors still seem nervous about the electric vehicle sector. Concerns come despite the European Union's ambitious climate targets presented this week. One thing seems certain about the company – volatility is here to stay at least until Merger Day, July 23, and probably beyond.

NYSE:CCIV investors experienced a buy the rumor sell the news day on the markets as shares sold off both during the session and in after hours trading. Shares of CCIV fell by 3.50% on Tuesday and closed the trading day at $25.91, before falling a further 3% after the market closed. It was an ugly day for growth stocks in general after the June CPI numbers were reported before the opening bell, showing that inflation is continuing to rise amidst the global reopening following the COVID-19 pandemic.

Lucid Motors CEO Peter Rawlinson held his much anticipated shareholders call after the market closed on Tuesday, and the initial reviews from shareholders was tepid at best. Comments about the presentation ranged from recycled to overly flashy with no substance, as Rawlinson tried his best to get shareholders excited ahead of the vote and merger that takes place in a couple of weeks. The largest takeaways from the call seemed to be that Lucid is on track to scale its production to nearly 500,000 vehicles per year by 2030. If Rawlinson and Lucid can pull this off, the company should be able to keep pace with Tesla (NASDAQ:TSLA) over the next decade.

Speaking of Tesla, the electric vehicle industry leader released the newest beta version of its FSD full self driving software to vehicles on Monday. FSD Version 9.0 hit Tesla vehicles via a software update, as the company continues to work towards autonomous driving and robo-taxis. How is Version 9.0? Initial reviews are muted, with several industry experts stating that the upgrade had no substantial improvement over the previous version. Shares of Tesla were down 2,5% on Tuesday.

Update July 14: C/hurchill Capital IV (NYSE: CCIV) has finished the day in the red at $23.79 per share, down by 8.18%. Wall Street was incapable to lift its head despite a dovish testimony from Federal Reserve chief Jerome Powell. Among other things, he said that the central bank would deliver powerful support until the economic recovery is complete. He added that inflation is expected to remain elevated in the upcoming months before easing, and acting prematurely would be a mistake. The NYSE Composite shed 122 points, while the best performer was the Dow Jones Industrial Average, which added measly 44 points.

Previous update: Churchill Capital IV (NYSE: CCIV) has kicked off Wednesday's trading session with a slip of 1% to around $25.20. Shares of the SPAC firm have been holding above the critical $24.96 level – just under the round $25 level – which was July's trough. Closing above that point would be a bullish sign. It seems that investors are looking for a new direction after the shareholder meeting and ahead of the merger with Lucid Motors due on July 23. Broader markets are benefiting from Fed Chair Jerome Powell's dovish message. The world's most powerful central bank is in no rush to reduce its $120 billion/month bond-buying scheme.