November's China Services PMI from Caixin was seen holding around 52.7 vs the prior 51.1. This has helped AUD/USD to stabilise following an Aussie GDP miss MoM and deteriorating trade deal sentiment headlines. 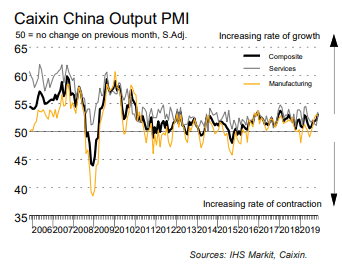 The Caixin China Composite PMI data (which covers both manufacturing and services) signalled a solid increase in total business activity across China in November. The Composite Output Index rose from 52.0 in October to 53.2, to indicate the steepest rate of growth for 21 months.

The upturn was driven by strong performances across both the manufacturing and service sectors. Notably, service providers registered a solid and accelerated increase in activity midway through the final quarter of 2019. This was highlighted by the seasonally adjusted Chinese Services Business Activity Index rising from 51.1 October to a seven-month high of 53.5 in November.

Meanwhile, the data is positive for risk sentiment with the Chinese November PMIs (the official ones) that were released on Saturday also coming in much better than expected. The PMI manufacturing rose from 49.3 to 50.2 (both we and consensus had expected it to stay below the 50 thresholds) Then, the private Caixin PMI manufacturing index came out better than expected – basically unchanged at a high level (51.8 versus 51.7 in October).

The overall picture from this chapter of PMIs supports the views that China has begun a moderate acceleration supported by stimulus and prior declining trade war fears. However, the recent headlines on the trade front have not been so promising. However, given that China drives one-third of global GDP growth and Chinese PMIs lead global PMI by a couple of months, then we could still see some follow-through which could act as a buffer to continued trade war uncertainties, at least for the start of 2020.

AUD/USD has consequently stabilised the Aussie GDP downside on the prospects of Chinese economic prosperity, at least for the meanwhile. AUD/USD is supported by the 50-Day moving average in the 0.6830s.