Australia’s Q3 national accounts in the Gross Domestic Product has been released. Prior to the data, analysts at Westpac had noted that," growth over the year to Q2 was just 1.4%, the slowest pace since 2009 and revealing that the economy was declining in per capita terms," arguing that, "favourable base effects should ensure that annual growth at least improves.

The data arrived as follows

The Australian economy grew 0.4 per cent in seasonally adjusted chain volume terms in the September quarter 2019 and 1.7 per cent through the year, according to figures released by the Australian Bureau of Statistics (ABS) today. 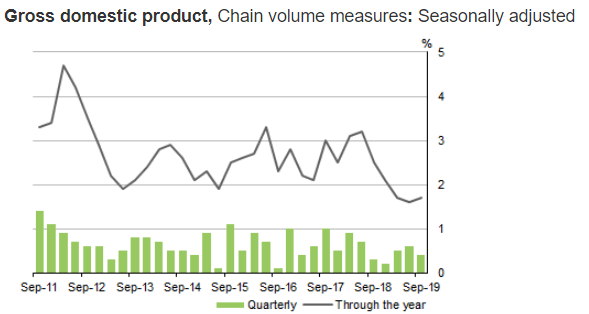 "It certainly suggests that activity has been stronger in the recent past, though it is the sharper downturn in activity in 3Q19 that we think is the more important consideration for the RBA, and which will likely weigh on the AUD," analysts at ING Bank argued – "The Reserve Bank of Australia has been characterising the economy as experiencing a "gentle upturn". But this data seems to suggest more of a gentle downswing. Consequently, it will be very hard for RBA Governor Lowe to hold back from easing again in February 2020, as he did this week."

The initial support offered by the 50-day moving average and convergence of the 21-hour moving average that comes in at around the day's lows of between 0.6815/30 has been targeted on the release. 0.6780 comes as a key extension level for the move, but there is little follow-through at this stage considering how weak the US dollar is and a reluctance to be 'long' of it. However, on a follow-through, bars can target the 0.6724 October 16 low ahead of the 0.6671 October low.