Netflix (NFLX) stock got some relief on Wednesday as it pushed ahead once news broke that it had partnered with Microsoft (MSFT) for its lower-cost advertising model. Netflix has been under pressure as the pandemic outperformance has been given back with the stock down nearly 70% so far this year. It has retraced significantly below its pre-pandemic level, which was around $370. Currently, it is trading at $176.

Microsoft Stock Deep Dive: Price target at $230 with near-term risks due to strong US dollar (fxstreet.com)

Why did Netflix stock pop?

Netflix needed some good news. While this is news, it is far from definitive, but it is also difficult to put a negative spin on this. The stock has been under massive pressure this year as subscribers and viewing times fall. The risk-reward to this strategy is probably skewed positively, and Netflix management would have been aware of that. Other streaming platforms have successfully used advertising models alongside paid subscription models for some time – think Spotify (SPOT). The only issue is the potential additional fees Netflix would need to pay to Hollywood studios to run advertising. The Wall Street Journal carried a story on this earlier in the week, saying Netflix may need to pay the studios up to 30% more to run their content on an advertising platform.

The larger problem for Netflix is the loss of its dominance in the streaming market. This has read-across for other stocks and is a tenet of investing legends. Warren Buffet, for example, likes stocks with a built-in moat or a virtual monopoly with huge and costly barriers to entry. For the first ten years, Netflix had an open playing field in the streaming market with virtually no competition. Eventually, the big tech companies saw the potential and made some inroads via Amazon Prime and Apple TV.

Netflix had a major headstart though, and these were mere subsidiaries for Apple and Amazon. However, things began to get serious when Disney (DIS) entered the streaming market. It immediately undercut the price of Netflix and with its huge content slate began an aggressive customer growth phase. The pandemic helped both streaming companies and perhaps masked the growing competition Netflix was coming up against. Other streaming options from HBOMax, Paramount, NOWTV and others meant Netflix began to lose subscribers and its growth stalled.

In our view, this has been read across for Tesla (TSLA). Tesla more or less invented the EV market, and Netflix more or less invented the streaming market. Both had a massive head start and an open playing field, but both now face increasing competition from legacy companies: Netflix in the form of old school media and entertainment companies, Tesla from legacy automakers switching to EV mode.

After a 70% fall, there is certainly some hope that the stock will eventually bottom out, but we feel earnings this week will put more pressure on the stock. The trend in subscriber growth remains negative, and it will take longer to arrest this decline in our view. However, the market has now likely priced in the bad news and the reaction to other earnings will be key.

Subscriber growth will probably be poor, but earnings should be more or less in line with current Wall Street forecasts. This should allow some temporary bottom to form with the potential for a short-term catalyst up to $240. Also of note, both the Relative Strength Index (RSI) and the Money Flow Index (MFI) have signaled oversold conditions recently, giving further credence to the short-term bottom. 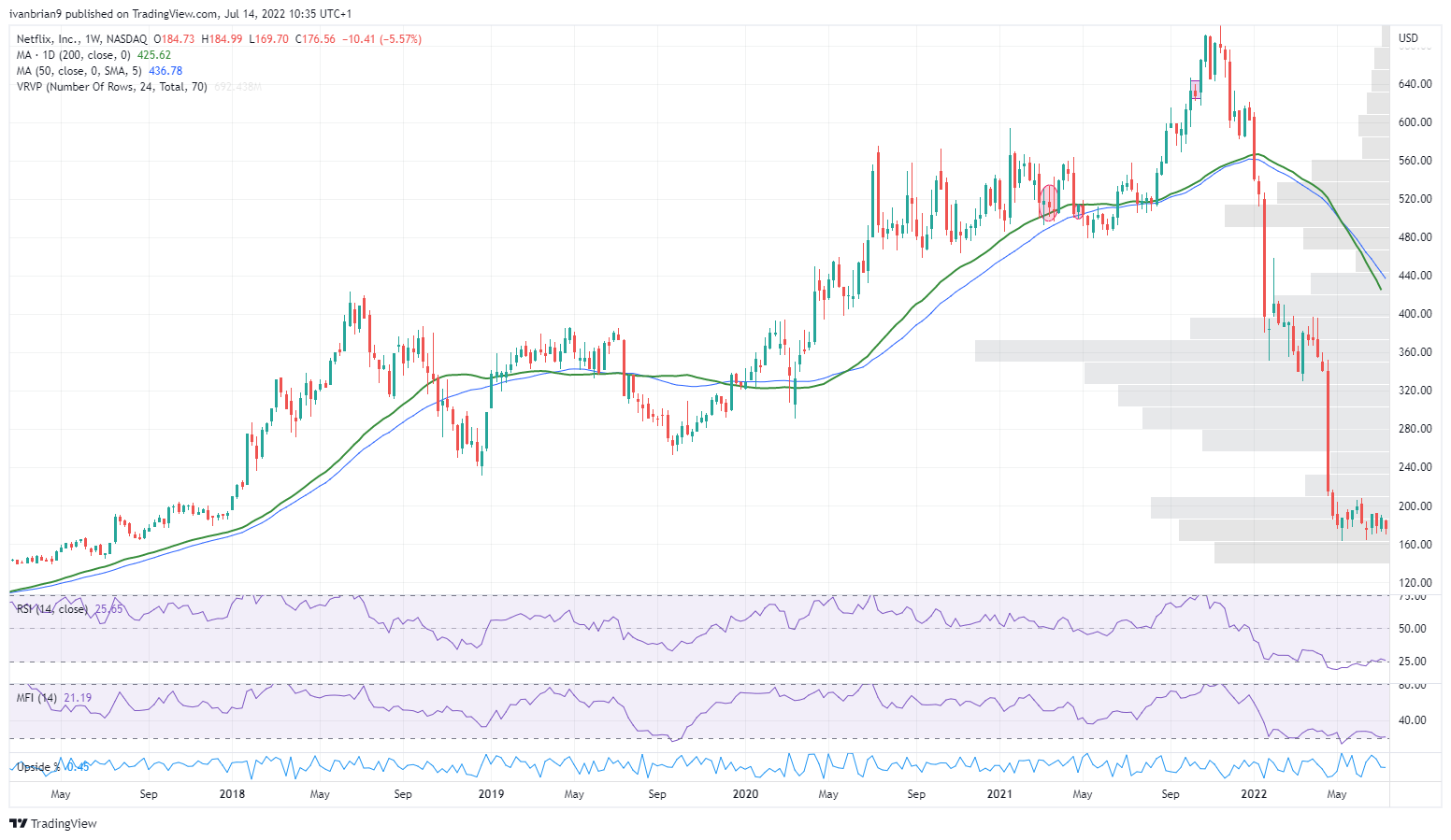 The author is short Tesla.