Update: AMC Entertainment retreated from an intraday high of $15.61 but managed to retain the 15.00 threshold, ending the day down by 0.62% to settle at $15.14 per share. Following the sour opening, US indexes managed to regain the upside, ending the day with gains, although equities retreated ahead of the close, on comments from US State Antony Blinken, who said that Russia might be contemplating a chemical-weapons attack. The headline fell short of triggering a run to safety and was just enough to help the greenback to recover some of the ground lost throughout the day. The Nasdaq Composite was the best performer, adding 1.33%, while the Dow Jones Industrial Average added 416 points. The S&P 500 ended the day up 1.13% or 49 points.

Meanwhile, US government bond resumed their advances ahead of the US close. The yield on the 10-year Treasury note ended the day at 2.20%, up from an intraday low of 2.10%. No progress in Ukraine-Russia peace talks could become a negative factor for global equities,  but at the time being, market players ignore the lack of progress in diplomatic talks. 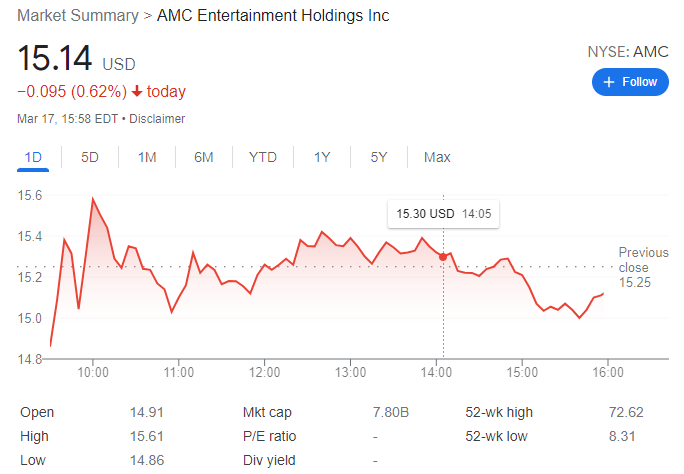 Previous update: AMC stock threw off its initial slide on Thursday and is trading up 0.5% at $15.35 about an hour into the session. Shares opened 2.1% lower at $14.91, and the market has appeared confused overall this morning. All three US indices were down at the open as oil prices rose 7.4% to regain the critical $100 a barrel price level. This has the effect of worrying the market since higher oil prices both cause inflation and in the past have also led to recessions. Though oil has remained high, the market has decided mid-morning that it does not matter, and at the time of writing (10:30 AM EST) all three indices are now slightly ahead. The Bank of England raised interest rates by 25 basis points to 0.75% on Thursday in line with the US Federal Reserve's 25 basis point hike just a day before. The situation in Ukraine is also less certain after notably vicious comments from former president Dmitri Medvedev and rumours that the US is planning to sell drones to be used against Russian forces.

AMC stock (AMC) made its shareholders happy for the first time in a while on Wednesday. Shares of the cinema chain closed up 5.2% at $15.23 after quite a few sessions in the low $13 range. The entire market was in risk-on mood as the Federal Reserve moved interest rates up 25 basis points as expected. Though rising interest rates may reduce economic growth on the margins, they are expected to deal a blow to current inflationary pressure that is the primary enemy of markets at the moment.

US indexes finished Wednesday with substantial gains on the Fed announcement. Jerome Powell, chairman of the Fed, said the central bank would begin aggressively reducing its bond-buying activity, which the market did not like, but said the Fed could do so because the economy was robust and employment was high, rhetoric that the market did like.

AMC is as ever a controversial investing play. Its decision earlier this week to invest in Hycroft Mining, the owner of an undercapitalized gold and silver mine in Nevada, has been steadily lambasted by the talking heads this week as just another gimmick. Retail investors, especially those famous AMC apes, seem excited by the deal. The $28 million investment by AMC gets the movie house a 22% stake in the mine, and management says it sees a turnaround story with Hycroft.

As more news has trickled out about the deal, what has emerged is that Mudrick Capital, the firm behind AMC's own turnaround one year ago when the theatre chain was nearing bankruptcy, was also the point man on this deal. Mudrick Capital flew AMC management out to see the mine and then hammered out the deal over Zoom chats. The mine had heavy layoffs back in November, and it is AMC CEO Adam Aron's opinion that providing liquidity to the miner will spur a major turnaround.

For skeptics, however, it is just another situation where AMC is jumping on the latest bandwagon to stay in the news. If that is the main reason for doing the deal, then it has worked. Nearly every finance site has been spewing words nonstop since the Hycroft deal was announced. Though it might seem an odd choice for investment, Aron was correct when he noted that the investment only took a small portion of cash that has been raised share offerings in the last year.

At present AMC stock is trading near the 9-day moving average at $15.09. To continue the rally, AMC stock must make a move to overtake the 21-day moving average, which now sits at $16.81. Above there is a supply zone extending from $19.34 to $20.96. This area is where bulls will likely target to take profit.

PREVIOUS UPDATE: AMC stock opened down 2.1% at $14.91 on Thursday. US futures are somewhat dimmer a day after Wednesday's FOMO price action. It seems that investors are taking a wait-and-see approach after the Wednesday market went hog wild on hopes that a diplomatic solution would end the war in Ukraine. A major point of focus are the new analyst forecasts appearing this morning on the Fed's future interest rates. Most Fed governors are calling for seven hikes in 2022, which on average would push the fed funds rate to 1.9%. Fed officials now see rates at 2.8% at the end of 2023, up from 1.6% previously. Investors are also digesting the Fed's aggressive stance on reducing its balance sheet, which could push Treasury yields much higher. Shares of AMC Entertainment Holdings were down as much as 2% in Thursday's premarket at $14.92 – an auspicious year as well as just above the ever-important $14.90 level that should act for AMC stock as support before a steep drop to the low $13s. The Bank of England raised interest rates by 25 basis points to 0.75% on Thursday in line with the US Federal Reserve's 25 basis point hike just a day before.