Update: AMC Entertainment edged marginally higher on Monday, ending the day at $15.88, up 0.51%. Wall Street turned south mid US afternoon, following comments from US Federal Reserve Chair Jerome Powell. Speaking in a private event about the economic outlook, Powell said that, given conditions are changing rapidly, Fed’s predictions could become outdated. Nevertheless, he also said that the central bank is prepared to hike the main rate by 50 bps in the next May meeting, while they might also start reducing the balance sheet. US indexes managed to bounce some ahead of the close, still ending the day in the red.

Powell was not alone in his pledge to raise rates by more than 0.25%, as earlier in the day, .  Richmond Fed President Thomas Barkin said the US economy is no longer in need of aggressive Fed support, while Atlanta’s Fed Raphael Bostic said that the increased uncertainty has reduced confidence, and is now appropriated to move into a highly aggressive rate path. 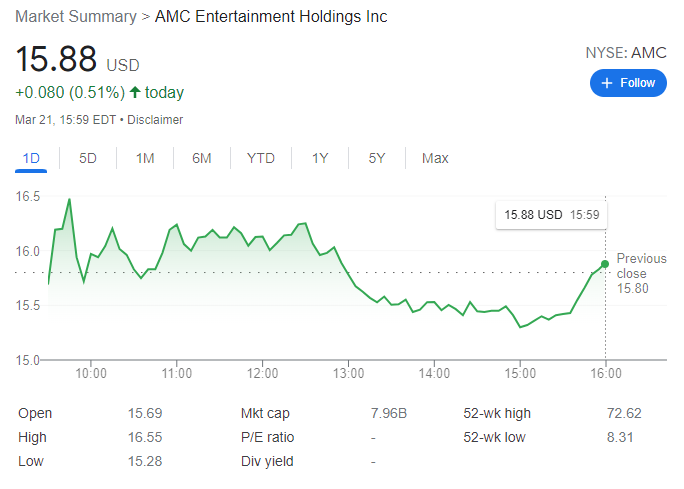 Previous update: AMC stock was up about 1% an hour into the session on Monday before losing its early advance and falling in line with the rest of the US market. AMC shares are changing hands at $15.75 at 10:35 AM EST, down 0.5%. All three major indices are lower with the Nasdaq down 1.2%. One of the major problems facing investors this Monday is oil advancing close to 6%. High oil prices tend to push up inflation and hurt the consumer economy. According to a survey by the American Association of Individual Investors, only 23.9% of individual investors have considered themselves bullish over the past two and a half months. This is one of the lowest readings since the Brexit referendum back in 2016. The Dow Jones Industrial is down 0.6% at the moment, while the S&P 500 index is unusually doing the best of the three at 0.4%. President Joe Biden is traveling to Europe this week to meet with his European counterparts, and markets may wait to hear what is next for the war in Ukraine.

AMC stock went on a recovery of its own last week as the market narrative completely turned around from earlier bearish sentiment. The recovery in equities was largely due to two main factors. First, the hopes for peace in Ukraine sent oil prices sharply lower back below $100. Oil prices went back to levels they were trading at before the Ukraine conflict began. This will have helped risk appetites.

Second, the Fed, despite reining in interest rates on Wednesday, was extremely bullish on prospects for the US economy. The Fed felt the US economy was strong enough to withstand the coming series of rate hikes without damaging economic activity. This was enough to spark a sharp turnaround in fortunes for equities, and growth stocks like AMC Entertainment were the biggest beneficiary as they had previously been the biggest loser.

The big news of course for AMC holders last week was the diversification into...wait for it... gold mining. Yes, an obvious fit for a movie theatre, you would have thought...not.  AMC stock announced it was investing in a gold miner in Nevada called Hycroft Mining. The move sparked a frenzy in the trading of HYMC stock, and at one stage it had doubled in price before some sense of normality took hold. This was an extremely odd move for a struggling movie theatre chain, and many commentators and analysts questioned the move. It certainly was attention-grabbing, and perhaps for a relatively small outlay, it was worth the investment alone for the publicity it generated. AMC returned to the top of the usual social media stock sites such as WallStreetBets, Twitter, and others.

Breaking $14.54 was technically bearish and opened the door for a move to $8.95. That is still technically a possibility unless AMC stock can rally all the way to break $21.04. We need to see if this recovery can hold. The RSI remains sub-50, and the MACD is flatlining, giving us a lack of directional clues. AMC stock remains bearish with a series of lower lows and lower highs, and only breaking $21.04 ends this series. We remain bearish technically, targeting $8.95. The frenzy over HYMC stock appears to be quieting, and AMC faces balance sheet issues in a rising interest rate environment. 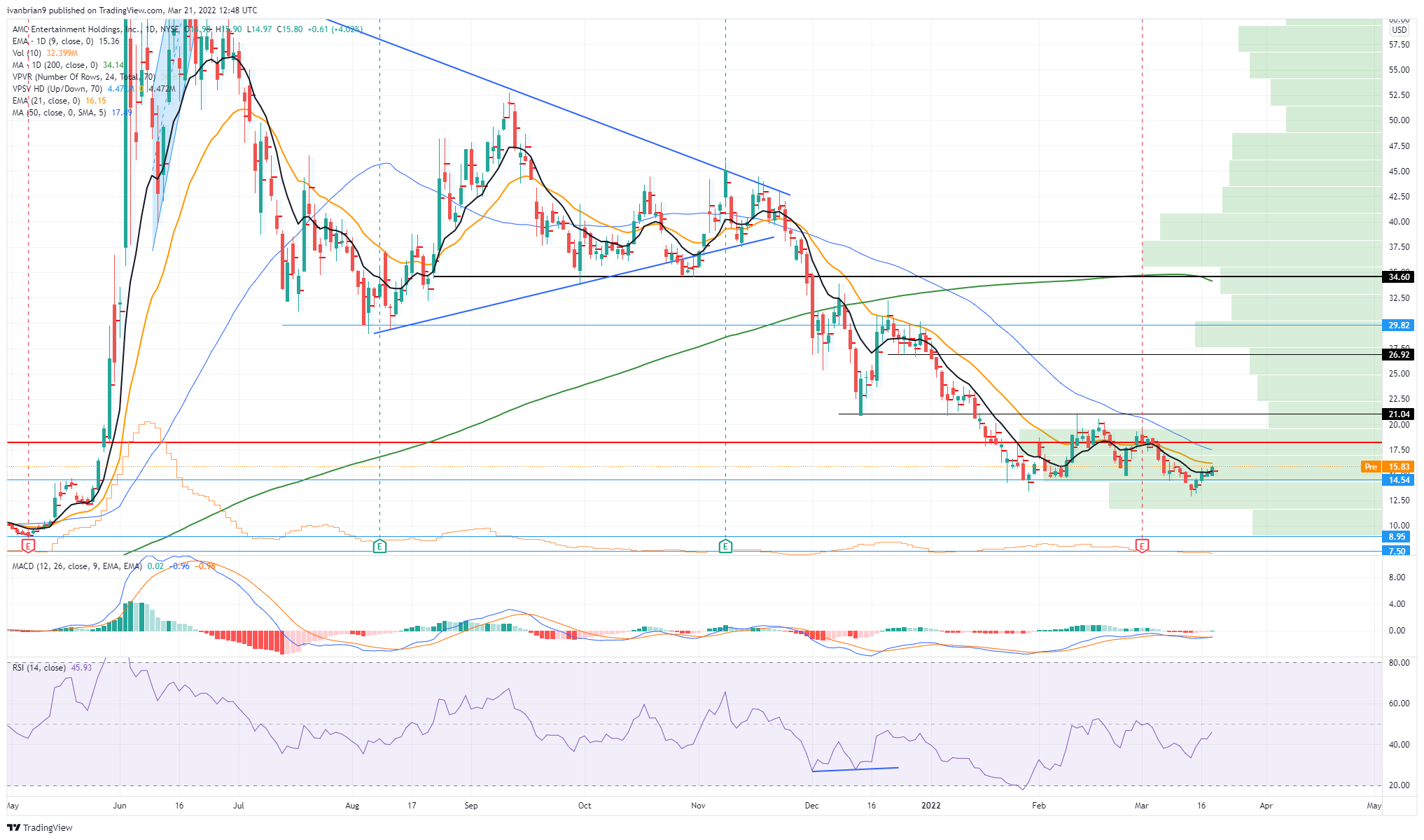 The author is long puts on Hycroft Mining (HYMC).

Update: AMC stock opened Monday with more positivity as AMC Entertainment powered ahead on the open to trade 2% higher in the first five minutes of the regular session. There is no real stock-specific news driving this move higher rather it is a continuation of last week's turnaround in equity markets. High growth and meme stocks all made outsized gains last week, making up for outsized losses so far in 2022, for example, AMC stock remains down 41% year to date so has some ground to make up. We tend to agree with Jim Crammer on CNBC late last week who encouraged investors to use the recent rally to sell out or reduce some positioning in higher growth names. This stock market rally may have more legs to run but a move to fresh record highs seems unlikely given oil is back above $108 and the Fed has begun its rate hiking cycle.