Update June 11: AMC Entertainment Holdings (NYSE: AMC) has kicked off Friday's trading session with a jump of around 4% to over $44.50, a recovery attempt after losing the battle for $50. As the current leader of meme stocks – replacing GameStop (NYSE: GME), AMC has competition. In the past week, attention has been spread thin among other firms such as Clover. That makes keeping AMC's price a harder task. Nevertheless, the movie-theater company has been finding buyers.

AMC shares continue to be well supported by their retail brethren as the stocks continue to push higher despite more talk of share sales. AMC is looking to get shareholders to approve the issuance of 25 million shares in 2022. Last week two share sales ignited the stock to swing high, an unusual phenomenon in financial markets, which normally sell-off when dilutive policies are announced. Share sales or share issues are generally dilutive in nature and so not liked by existing shareholders.

However, the AMC case has not really followed the normal rules of trading and here proved no different. The first share sale involving Mudrick Capital appeared to be the catalyst for retail traders to prove the short sellers wrong. The second sale last week added further fuel to the fire as retail traders pushed AMC to sky-high levels in a bid to squeeze shorts.

The CEO is having to draw a fine line between asking for shareholder support – saying "If you arm us with the tool — meaning stock as the tool — to go find value-creating opportunities for AMC shareholders, we can do that. If we are not armed with this tool, then you’re tying our hands behind our back and you’ll make it just that much harder for us to land some of these attractive opportunities that could benefit us all." He also cautioned against the moves in AMC's share price.

The SEC filing contained some strong warnings about the volatility of the share price: "Within the last seven business days, the market price of our Class A common stock has fluctuated from an intra-day low of $12.18 on May 24, 2021 to an intra-day high of $72.62 on June 2, 2021, and we have made no disclosure regarding a change to our underlying business during that period, other than with respect to an additional financing. Under the circumstances, we caution you against investing in our Class A common stock, unless you are prepared to incur the risk of losing all or a substantial portion of your investment." A strong statement indeed.

Support at $36.13 was in sight of bears on Thursday, but retail bulls have returned to take control. $36.13 is the high from March 2015, and this level worked well as can be seen from the clean breakthrough on Wednesday. Below that is the 61.8 Fibonacci retracement, perhaps the most-watched of the Fibo levels, at $33.39, this also corresponds with Tuesday's high and the 9-day moving average. The momentum indicators have at least moved back toward neutral territory as the speed of the move has slowed, if not the volatility. Only the Relative Strength Index (RSI) remains in overbought territory, while the Commodity Channel Index (CCI) and the Willaims %R are now below overbought levels. 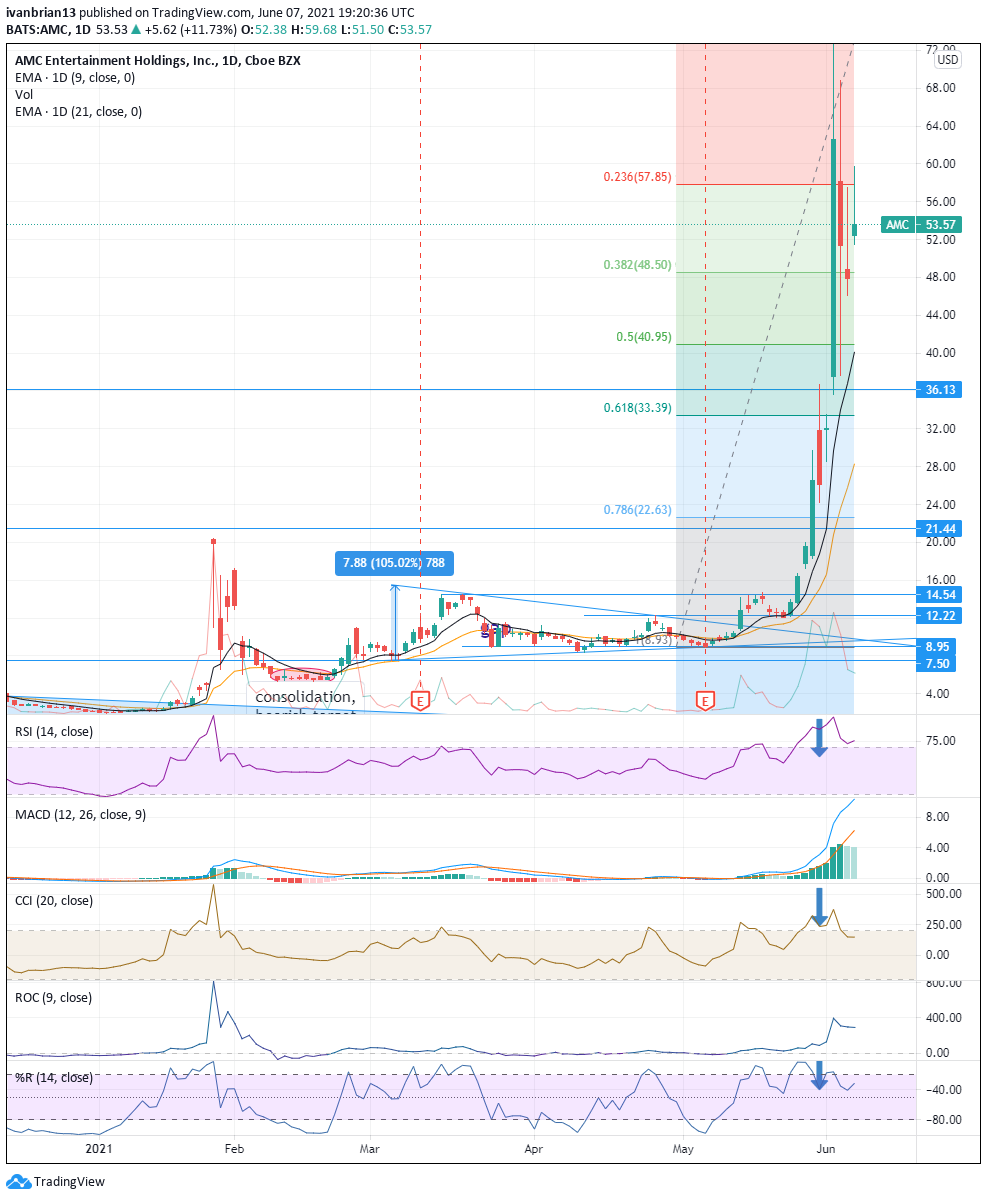 Update June 10: AMC Entertainment Holdings Inc (NYSE: AMC) has been rebounding in Thursday's early trade. Shares are flirting around the $50 level, which the movie theater company's equity lost on Wednesday. The media attention around meme stocks remains elevated with AMC seen as the new GME. Broader stock markets are on the rise, with the S&P 500 Index hitting a new all-time high despite rising US inflation.

Update June 10: AMC Entertainment Holdings Inc (NYSE: AMC) extended the sell-off into Wednesday, hitting multi-day lows at $48.30. The stock finished 10.37% lower, settling below the $50 mark. In post-market trading, AMC shares lost another 4% and breached the $48 level. Investors believed that AMC may not be able to withstand intensifying competition while the company’s prospects remain uncertain. The downbeat mood across Wall Street exacerbated the pain in the stock.

Update June 9: AMC Entertainment Holdings Inc (NYSE: AMC) shed 10.37% and settled at $49.34 as stock remained unattractive, with major indexes closing in the red. The DJIA was the worst performer, losing 152 points. The focus remains on US inflation figures and their possible effects on the Federal Reserve monetary policy. US CPI is expected to be upwardly revised in May from a preliminary estimate of 4.2% to 4.7%. Some analysts are even expecting a jump to 5%.

Update: AMC Entertainment Holdings Inc (NYSE: AMC) has kicked off Wednesday's trading session with drip below the round $50 level, yet buyers are coming in and are keeping the battle with that area in play. Moreover, the equity of the movie-theater firm is holding above $47.91, which was June's low closing point – critical support. As described below, regulatory issues are on investors' minds.