AMC has done it again and in the process is stealing the GameStop crown. Supposedly a movie about the whole GameStop saga is in the works, but if AMC has its way it will be stealing the show. Coming to an AMC theatre near you: "AMC to the moon".

In the unlikely event you are not aware of the back story, here is a little recap of the story so far. AMC is a global cinema chain and, as a result, has struggled during the global pandemic as most of these cinemas have been closed for the better part of a year. The company narrowly avoided bankruptcy through the interest of retail traders. By strongly backing it, these retail traders allowed AMC to raise capital and debt, meaning it could survive the pandemic.

AMC announced results on May 6.

EPS was $-1.42 versus a forecast of $-1.26. Revenue was $147.4 million versus a $153.6 million forecast. The CEO Adam Aron thanked the new wave of retail investors for essentially saving the company and made a donation to the Diane Fossey Gorilla Fund as r/wallstreetbets call themselves apes and have been donating to this cause in large amounts. A brilliant and wonderful side effect of this latest craze.

AMC announced on Thursday that it has completed the offering of 43 million shares it launched on April 29. AMC CEO and President Adam Aron said, "the additional cash raised puts AMC in a stronger position to tackle the challenges and capitalize on the opportunities that lie ahead." Further, the hashtag #AMCSqueeze trended on Twitter, which seems to have brought in another Redditt-led wave of retail investors.

The technical picture looks now very bullish. We can take some credit here at FXSTREET for at least identifying the key levels and the potential for an explosive move. As ever with trading, nothing is set in stone, so the most important thing is to identify the key levels and potential price action at those levels. No one can just say it is going up or down and get it right all the time. But if you watch the key levels, react accordingly, and manage your risk it should at least give you an advantage.

So where to now? Well, $14.54 is the next level to target for AMC. Yesterday's move nearly got there but stopped just short. Some would see that as a bearish sign but a 24% move is more than enough so let us not be too greedy. Ideally, AMC would consolidate and then move to take out the $14.54 level. The problem with sharp aggressive moves is the lack of consolidation zones. These kinds of areas allow traders to become used to the price and more accepting, which creates stability. Sharp moves have little price discovery so a price that flies sharply higher can drop quickly without time to consolidate. This is exactly what happened AMC in January, $5 to $20 in about 3 days and back to $6 a few days later.

So, ideally some consolidation would be preferable before regrouping for a move to take out $14.54. This then sets the scene for another ascent of $20. 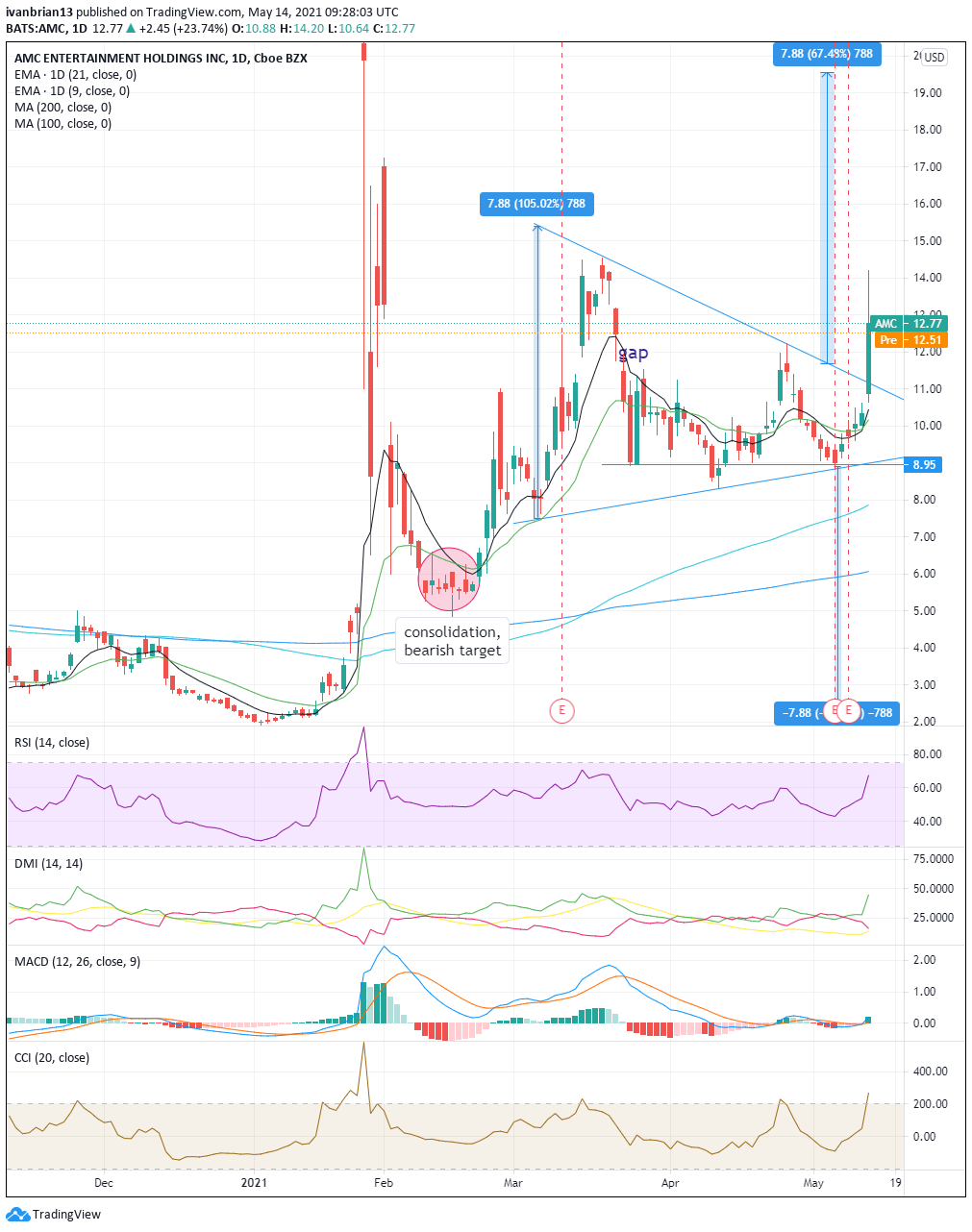