Afternoon Update: A little wobble in Apple is evident as the stock prints a disappointing engulfing candle. Given it is engulfing a bullish trend we may just get away with this one but the close toward the lows of the day and the majority of volume printing near the lows puts the recent uptrend in question. Will Apple get that Friday feeling? Tune in tomorrow to find out!

Morning Update: Thursday is pretty uneventful so far for AAPL stock as it builds on the gains from earlier in the week. $135.51 is interim resistance but $137 is the bigger prize as volume dries up above this level so a break should accelerate to test new record highs. So far on THursday Apple is registering a continuation candle so the trend remains in place.

Apple shares continue to push toward fresh record highs and follow in the footsteps of other FAANG names such as Facebook (FB). The social media giant again set record highs on Wednesday, while AAPL shares have been lagging behind. AMZN remains within touching distance of record highs, and Alphabet (GOGL) also set new highs on Wednesday. The chart below compares AAPL, FB and GOOGL shares.

AAPL stock has been languishing since stellar results at the end of April. Apple shares traded up to $137 immediately after that earnings release. Those results were pretty stellar, coming in 40% higher than the average Wall Street analyst forecast. Apple also upped its buyback program as well as increasing its dividend. However, as mentioned, May was a tricky month for the Nasdaq, and Apple suffered as the month wore on, slipping to $122. June has been kinder to AAPL stock with the shares finally seeing some bid action and pushing steadily back to test key resistance levels, the next test coming at $137.

The triangle breakout was a perfect move and followed through with a strong gain. Wednesday's price action was flat with little action, but that just adds a consolidation phase into the upmove. The low from Tuesday's breakout was not broken, meaning the trend is still, in place and Wednesday was a continuation candle. Thursday will need to see the high from Wednesday taken out, and so far the premarket action looks like this will be the case. Above $135 we can see how volume thins out quite a bit. We identified a similar situation for Tesla above $635, and the stock duly exploded through the level. A lack of volume means a lack of price acceptance.

Markets generally move from one point of equilibrium to another. Equilibrium means volume, so areas with a lot of volume are harder to break through than those without. Breaking $135 and the nearby $137 (high from the results release) should see an acceleration to test $145 highs. An options play might work well here as Apple volatility is not too high. Buying out of the money calls will not break the bank. A sharp move should see the option increase in value due to a volume spike as well as moving more in the money. 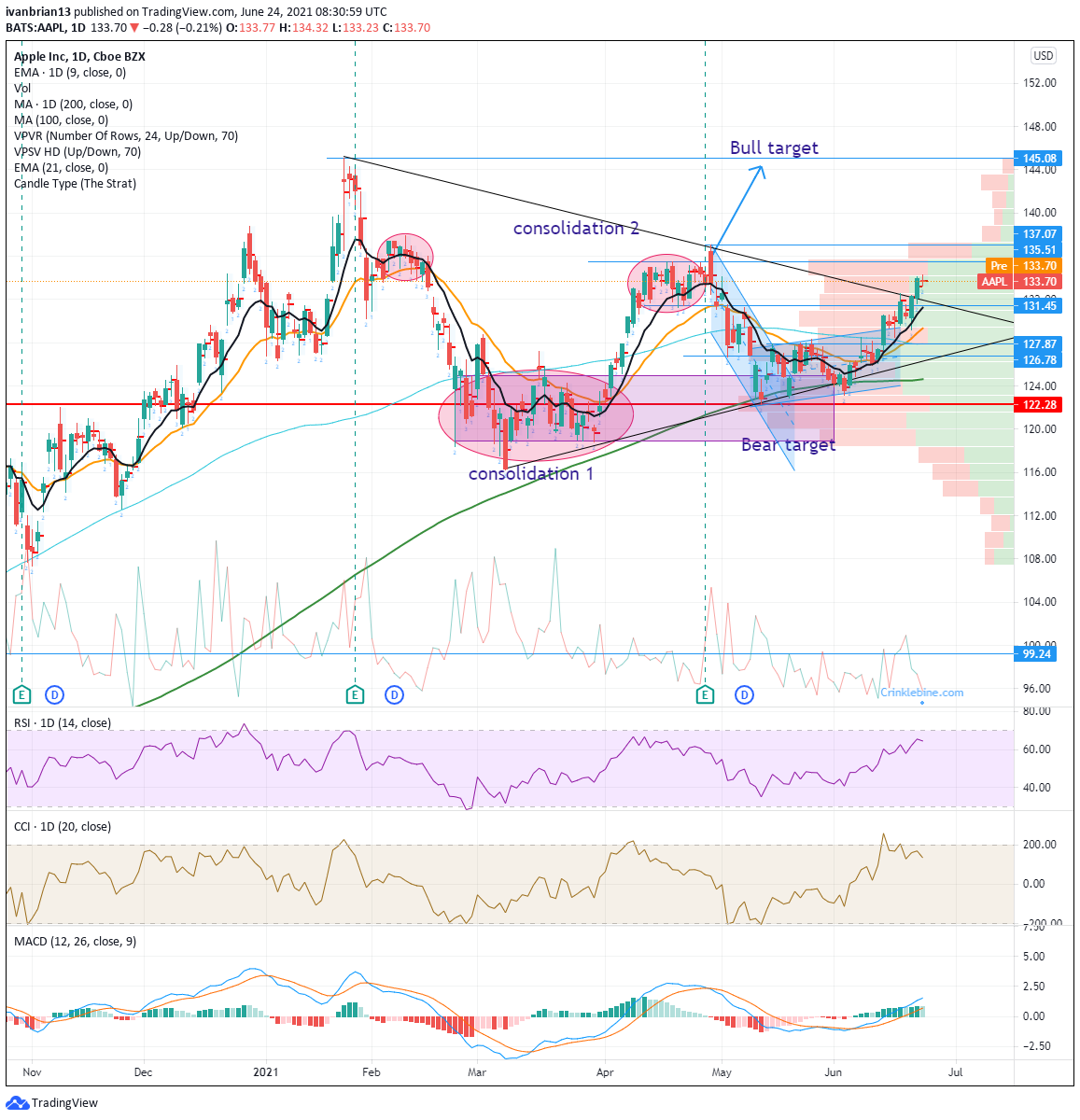