Skip to main content
;
Ichimoku Kinko Hyo (often refered to as Ichimoku or simply Ichi), is a method of technical analysis developed by a Japanese journalist. Here’s everything you need to know about it…

Ichimoku merges three indicators on one graph to provide a clear picture of the market. It simultaneously provides the trader with an eye on previous price trends, clear cross-over points to initiate a position, as well as an indication on the strength of the entry points.

It is a technique which really utilises the power of information, allowing the trader to make very well informed decisions.

Let’s jump in at the deep end… 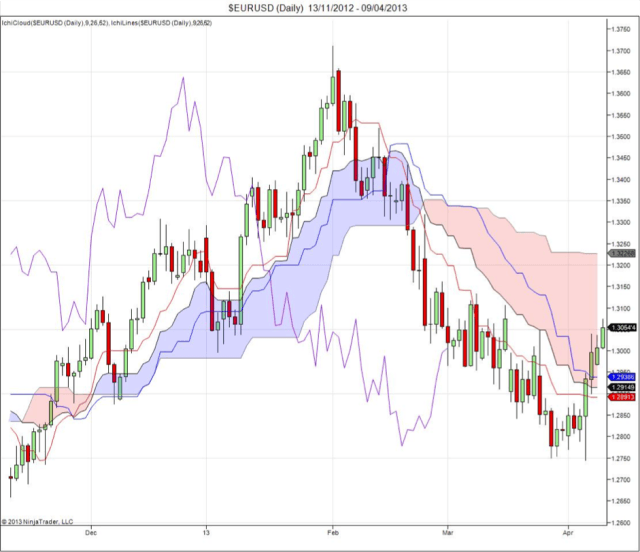 Below is the very familiar candlestick chart, with the addition of a red line (Tenkan-Sen) and a blue line (Kijun-Sen); these are our first indicators.

However the most critical thing the Tenkan-Sen & Kijun-Sen lines reveal is a clear cross-over point; this is the point at which a trader should consider initiating a position. 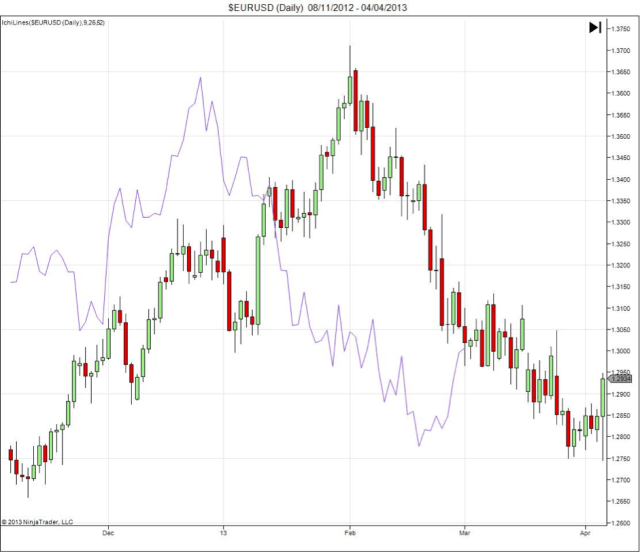 The Chikou Span is directly translated as the lagging line. This is because it is not an up-to-date indicator and always lags at least 24 candles behind the current price – see above.

It is intended to give the trader an eye on previous price trends and give a clue to any potential upcoming trends. For example, if the current close price is lower than 24 candles ago, it would indicate that there is a more bearish price action to come and vise versa.

This is potentially the most important indicator of the of Ichimoku strategy.

The cloud is a measure of support and resistance and is used to identify potential breakout points. It becomes extremely powerful when it is used alongside the cross-over points provided by the red and blue lines of the Tenkan-Sen & Kijun-Sen.

Note that a cross-over point is the point at which a trader should consider initiating a position.

Below is a graph featuring all three indicators. 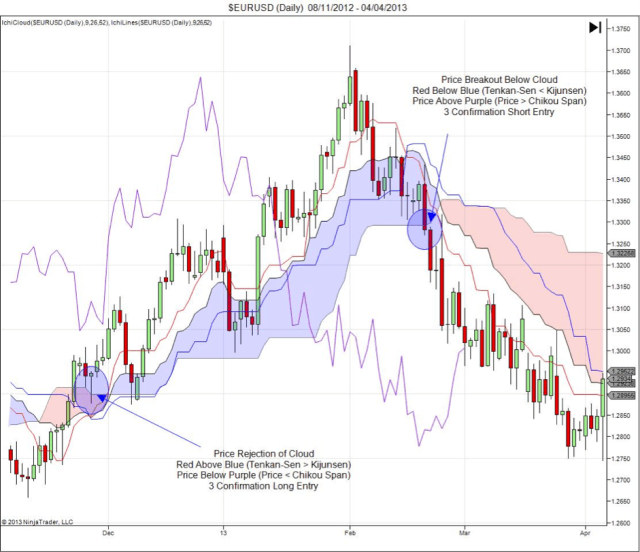 A cross-over below the cloud indicates weak strength, and a cross-over above the cloud is the strongest indicator, as it is clear of resistance.

Hopefully this hasn’t been too confusing due to the various components of the strategy, but its almost fool-proof indicators will allow you to capture some very profitable trends.

All comments, charts and analysis on this website are purely provided to demonstrate our own personal thoughts and views of the market and should in no way be treated as recommendations or advice. Please do not trade based solely on any information provided within this site, always do your own analysis.