While I do favor pure price action when trading the currency market, the idea behind this article is to show how a simple approach to trading could work, too.

Like any trend indicator, the moving average is plotted directly on the actual chart, not on a separate window. It effectively averages the values in the previous candles, to plot the current one. 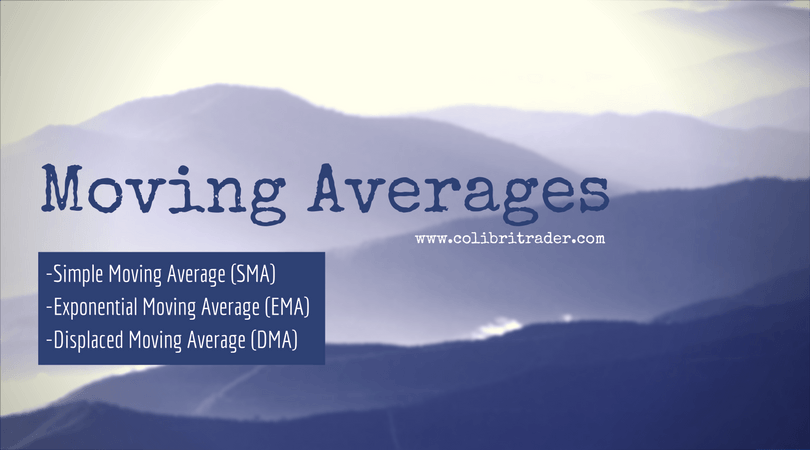 Traders favor either the SMA or the EMA. The SMA simply averages the closing prices for the period it considers.

For example, the SMA (100) considers the last one hundred candles and averages their closing prices to plot the current value. And so on and so forth.

For some, the EMA is more accurate. It reduces the lag by applying more weight to recent prices.

IMPORTANT: In the end, it depends very much on the trading strategy used. Some strategies work better with SMA’s rather than EMA’s. Or, the other way around.

To put this into perspective, think of the Bollinger Bands indicator. It is considered that the indicator is far more accurate if the MBB (Middle Bollinger Band) is an EMA.

Support and Resistance with Moving Averages

Moreover, the bigger the time frame, the stronger the support and resistance. In other words, when the price hits a 200 EMA on the monthly chart, there’s a strong likelihood it will hesitate at the level.

True Fact: Further, price acts around moving averages just like it does around a classical trend line. Once broken, the support becomes resistance. Once resistance gets broken, it turns into support.

In fact, it means it moves together with price. Due to the way they’re calculated, traders use moving averages to trail stops when riding a trend.

Others use them to add to a strong trend. As a rule of thumb, the more price comes to a moving average, the weaker the trend becomes.

Therefore, it is not recommended to use a moving average to add more than two times to a trend. If the price finds the strength to reach it again, the trend is not that strong. Check out the Daily EURUSD chart below. There are two times where price is close to moving average. It is a perfect dynamic resistance zone that pushes price lower.

Traders define a bull or bear market when different moving averages cross on the same time frame. The most known crosses are the golden and death ones. 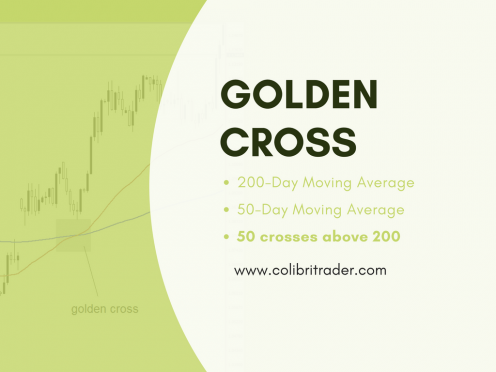 A golden cross forms when the 50-day moving average moves above the 200-day one. It shows bullish conditions.

When this happens on the major stock indices, it is said that the market enters “bullish territory”. From this moment on, traders will look to buy the dips.

The same is valid when trading a currency pair. A golden cross shows the start of a new bullish trend and the challenge will be to pick the best entry places. That usually happens when a retracement occurs. Check out this article if you are not sure how to enter when you have already missed the initial signal. 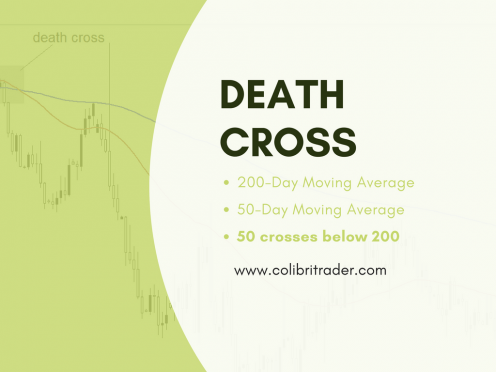 On the other hand, when the 50-day moving average crosses below the 200-day one, a death cross forms. The death cross is the opposite of a golden one. Hence, it shows a bearish market.

This simple strategy is enough to define the state of a market. Sometimes, when the market consolidates on such a time frame, these crosses form multiple times.

Yet, the price will hesitate when it meets the averages. There is an example taken from the Daily EURSD chart. The first cross is a death cross as can be seen from the chart.

IMPORTANT: Usually traders using moving averages are using wider stops, as well. As can be seen from the “Death Cross” if your stop loss was too tight, you would have been taken out of a profitable trade very quickly.

Traders using moving averages as their primary strategy know that and are trying to position themselves favourably, using wider stops. I am not going to dive into the intricacies of moving average trading strategies, because they are too many.

There are whole books written on this topic and as you know, I do use primarily price action in trading.

Some trend-following traders do not settle only with golden or death crosses. They create a system that works/should work on every time frame.

The idea is to measure a trend’s strength. When the averages are perfectly aligned or travel in a “perfect order”, the trend is at its maximum strength.

When the smaller moving averages cross the higher ones, the trend falters. To spot if this is a fake move or not, traders look for confluence areas.

If price hits the moving averages in a confluence area, the support or resistance level is stronger than usual. As such, that’s the perfect place to add to a trade.

Confluence areas are rare, but when they occur, they are very powerful. Some traders are only taking trades when price approaches such area. As I like to say, there is no holy grail in trading. Those pleases sometimes break and price pierces through them establishing a new trend.

It is of utter importance that traders have the right money management skills. If in doubt, check out this essential chart showing what will happen to your capital once you start losing. Pay attention to the part that shows you how much “% to recover loss”. 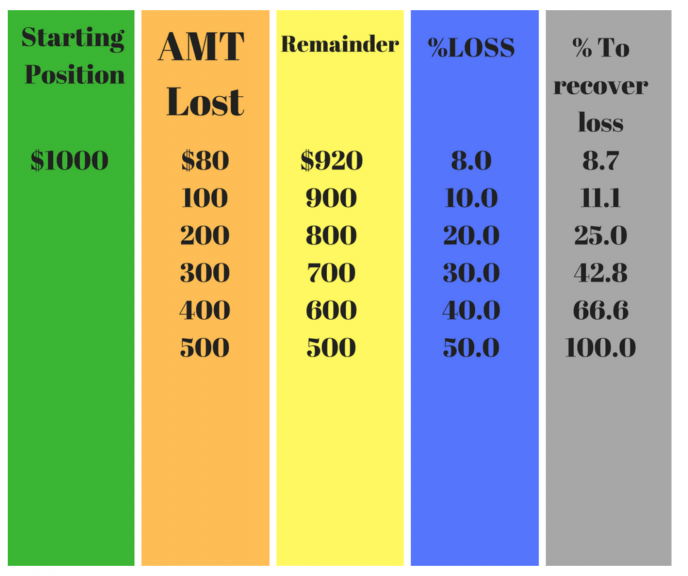 Moving averages are great trend indicators. Traders like to say that “the trend is your friend”. As such, everyone wants to ride the perfect trend. But is it really possible?

A moving averages system can show the perfect trend. You should keep in mind the following:

Moving averages are also part of various other trading strategies. For example, they act as confirmation.

Some traders use divergences between the price and an oscillator. When they spot one, it would be better if some other indicator confirms the support/resistance level. This is where the different types of moving averages come to help.

To the surprise of many, such a simple approach works more than people think. Especially if the moving average uses a higher period, like the 100-day or 200-day ones. But again, as the latin maxim says: De Omnibus Dubitandum. In other words: Doubt Everything