Even with the benefit of a night's rest, NFL fans are still flabbergasted by the New England Patriots shocking Super Bowl comeback to beat the Atlanta Falcons 34-28 in overtime. For my money, it was the best Super Bowl in history and it cements Tom Brady's status as the greatest quarterback of all time (Go Blue!).

Not surprisingly, all the sports talk shows and corner bars across the country are filled with "Monday Morning Quarterbacks" criticizing the Falcons' self-destructive play calling, which was admittedly atrocious. But one other group is getting just as much condemnation: the burgeoning sports analytics community.

All the newfangled "live win probability trackers" unanimously had the Falcons as overwhelming favorites to win late in the game. The below chart, courtesy of ESPN.com, had the Falcons as high as 99.6% likely to win at one point in the fourth quarter. No doubt many Atlanta residents were already planning on requesting a day off from work to attend the victory parade: 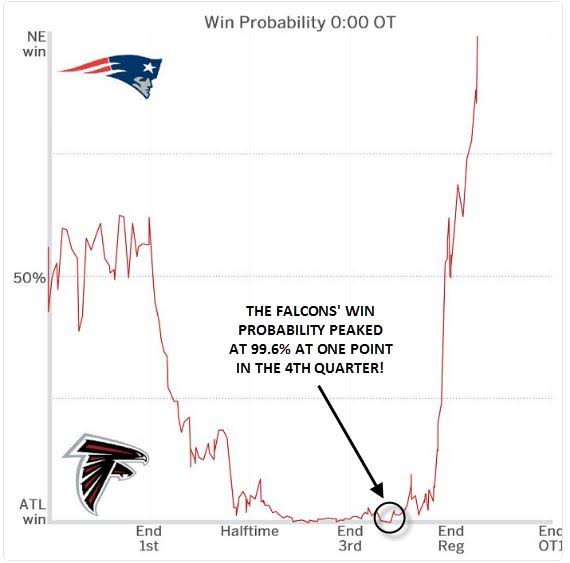 Surely, some fans argue, the ex post fact that the Patriots won (to say nothing of other recent long short bets including Brexit, the Cleveland Cavaliers comeback from 3-1 down in the NBA finals, and Trump's run to the White House) invalidates the use of such statistical models?

While I'll be the first to argue that perhaps some of the models were too confident in their conclusions, especially around the US election, the fact remains that such models can only give probability-based forecasts, not guarantees. 99.6% is not 100.00%.

Even if better programmers and more advanced statistical programming in the future determines that the Falcons' hypothetical win probability was "only" 99% or 95%, the fact remains that it's overwhelmingly difficult to come back from down 19 points with less than ten minutes left in a football game. The closest historical statistic that I could find was that teams that were down at least 17 points after the third quarter were 0-133 in NFL playoff history before last night, and the Patriots situations was even more dire than that.

So what does this mean for investors? There are two big lessons for market participants to draw from the Patriots historic comeback:

It's often said the most dangerous words in investing are "this time is different," but the truth is that every time is different. Even if situation A has led to result B the last 133 times it appeared, that doesn't mean that it will on the 134th time (especially when you have mitigating factors, such as the best coach-quarterback pairing of all time on one side).

Speaking of greatest-of-all-time experts in their field, Warren Buffett once said that "diversification is a hedge for ignorance." Even if we judge a certain outcome is 99.6% likely (an investing impossibility given the pseudo-random nature of markets), we're still ignorant of whether any given trial will fall into the 99.6% "bucket" or the 0.4% "bucket." That's why diversification and proper position sizing are absolutely essential.

Lesson #2: Evidence-based thinking is still the only strategy with any hope of long-term success

Today's Monday Morning Quarterbacks are all denigrating live win probability models, but uniformly discarding such tools is "throwing out the proverbial baby with the bath water." Rather than scrapping an evidenced-based forecasting method after an unlikely event occurs, such occurrences provide an opportunity to review the model and determine if its analysis is still valid.

As far as I know, there haven't been any major changes to the rules or structure of the game of football that would render models based on historical NFL games invalid. Similarly, even if we see another "six-sigma flash crash" in the markets, that doesn't mean you should immediately abandon a previously profitable strategy or investment plan.

After all, there is at least one certainty for investors: the fly-by-the-seat-of-your-pants alternative to an evidence-based process is the only guaranteed way to lose money in markets.