I think that we would all agree on the fact that this has been an eventful year in the world of politics and has most definitely had an impact on the global financial markets as such. What started with a Brexit, swiftly led on to a shock election for Donald Trump, rounding off nicely with a snap general election in my home country of Great Britain. Huge moves in the financial markets fueled by political surprises have now become the norm and incorporating tactics to deal with this has become more necessary than ever before. I said it once and I’ll say it again however, if you are looking at the markets through the eyes of an institution instead of the eyes of a retail investor, you are more likely to be able to approach your speculative activities from a point of safety rather than regret.

As I engage with students and prospective students alike, the questions arise frequently about how we teach our graduates of Online Trading Academy to work around times of such uncertainty. If you have read one of my articles before, you will know that the number one decision-making factor which all traders and market speculators must be aware of is the behavior of price, and more importantly what moves prices up and down. Supply and demand created by major banks and institutions is the fuel which drives the markets, and by recognizing and understanding the footprints of these big market players we too can spot the imbalances which create major demand and supply zones and in turn give us low risk and high reward trading opportunities on a frequent basis. Once you understand the nature of price, you then factor the news around it.

What better example to use from recent events than the UK election which took place on June 8, 2017? This is not the first example I’ve shown you through one of these articles of how price and economic news can work in harmony, and how the discipline to trade, armed with a solid risk management plan around all outcomes produces positive results. Too many people attempt to read the news and then decide on which trade to take after. This retail thinking is what always gets them late to the action and forces them to chase price. The professional simply looks for what the big banks and institutions are doing and follows along. Let’s face it, the biggest orders will create the biggest imbalances, which in turn create great levels of demand and supply and I think we all know who has deep enough pockets to create orders of that size, don’t we?

News will come and news will go but our job is to trade the plan and the zones consistently, regardless of what we may think or hear in the press. Let’s look at a recent XLT session I did last week on the British Pound Futures, over a week before the UK Election: 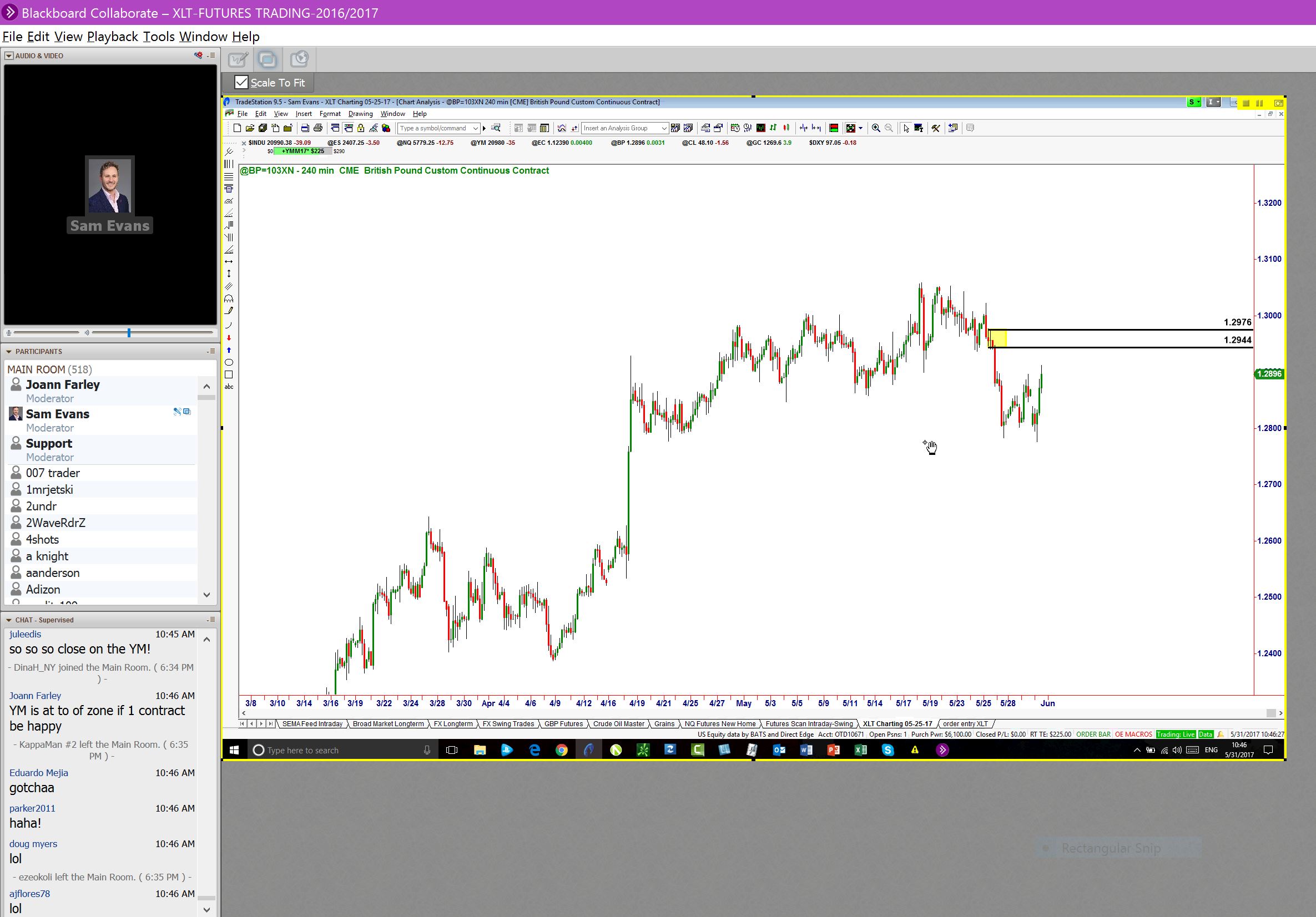 In this session from May 31st, 2017, I identified a clean level of supply for a nice short on the GBPUSD Futures. As we can see, price was still nowhere near the entry, thus allowing us to set and forget the trade ahead of time. As with all XLT sessions, the instructor will share with the class the entry, stop and targets clearly for all to see, via the prep screen and by drawing on the chart itself. We went to do this as necessary: 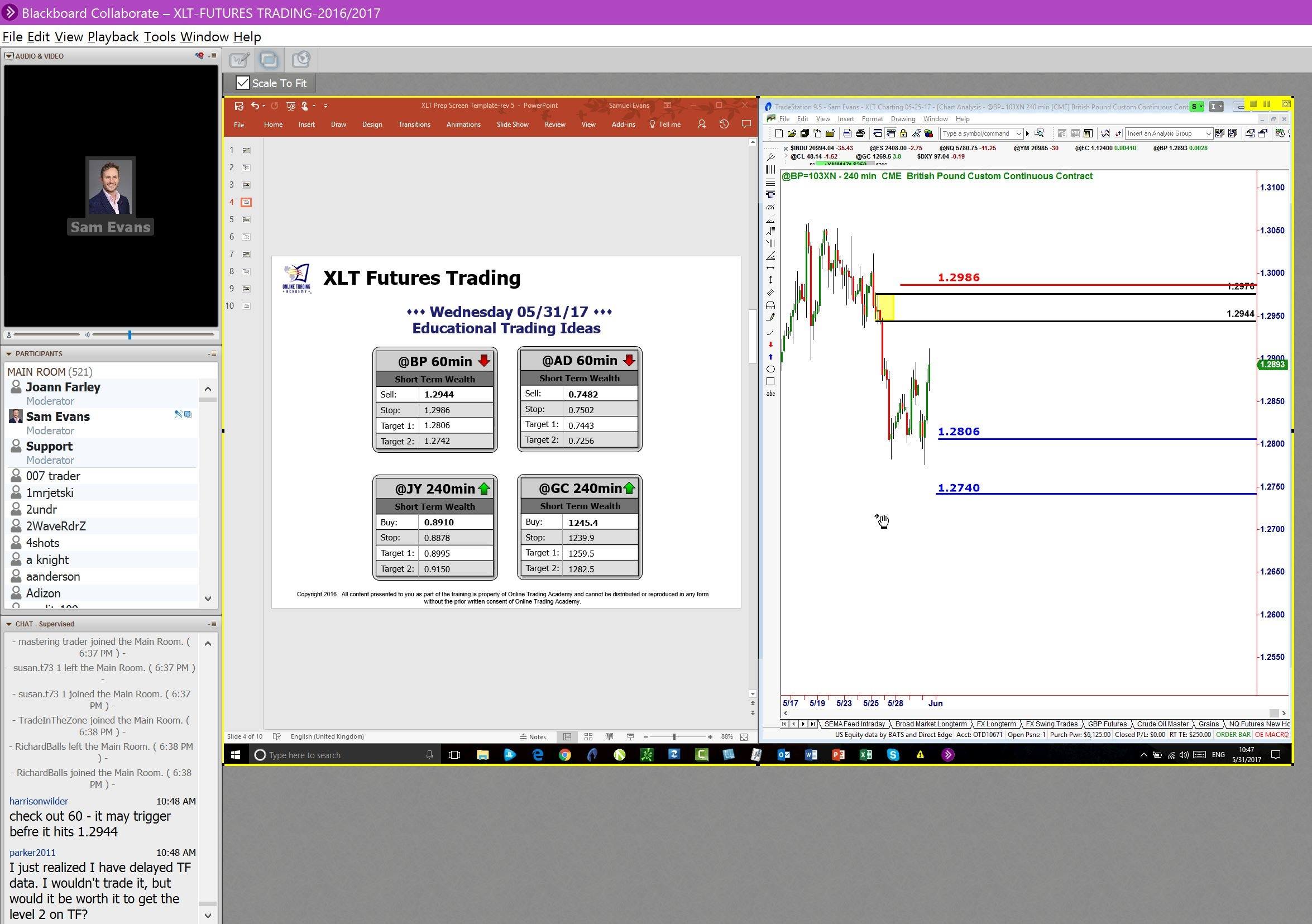 You will see that the prep screen on the left of the screenshot gives us the numbers for the trade and I then drew these in on the chart, with red for the stop loss and the 2 targets in blue below. I also looked much lower still for a third target as well, which can be seen here: 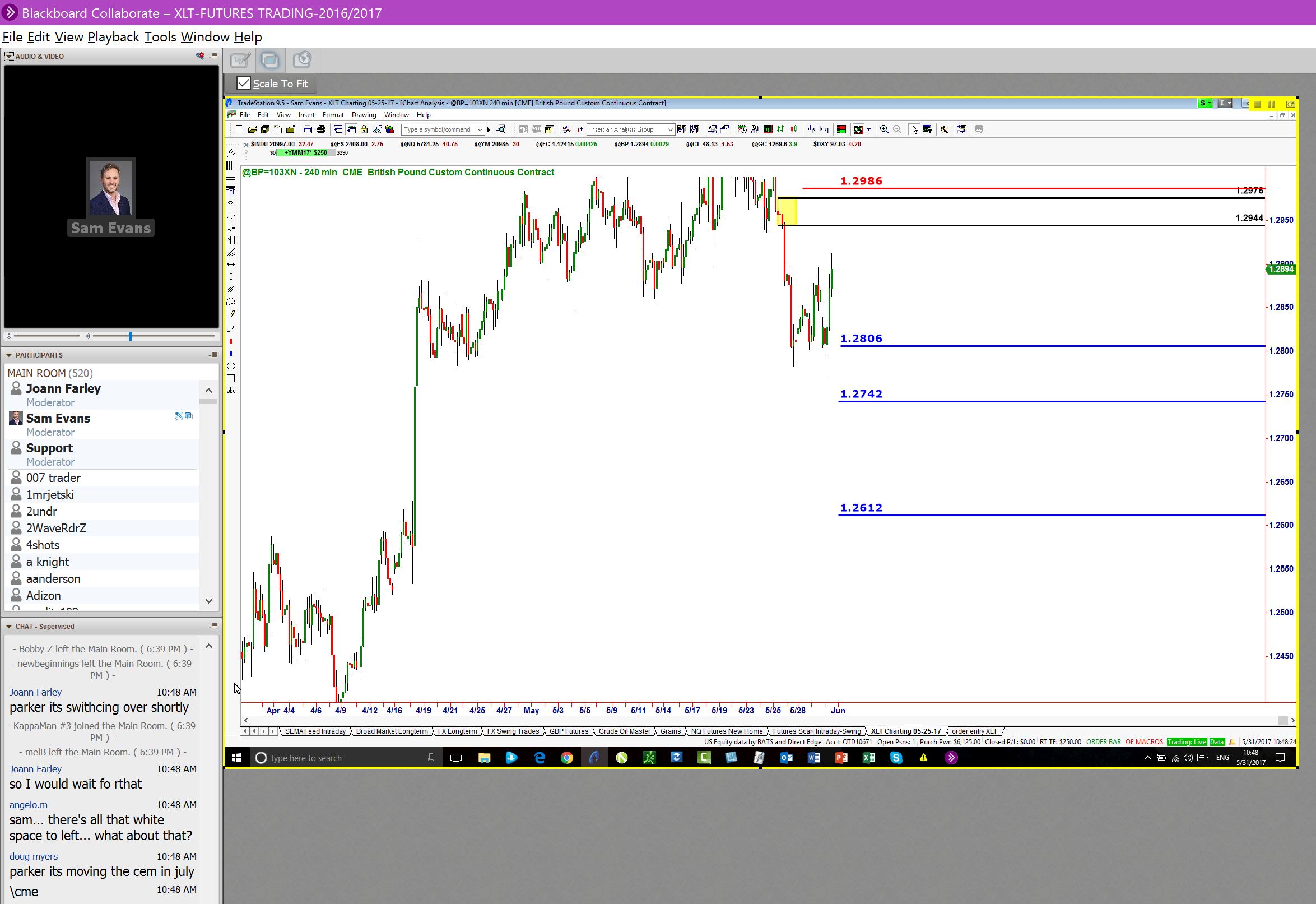 With these factors all planned, this gives all 520 students in the room the opportunity to consider this trade for themselves and do their own position sizing around the numbers and trade given to them. Once this is done, we put the orders in for a “Set and Forget” approach and let the markets do their thing.

Now as this trade was planned on May 31st, we did know that the UK election was happening just over a week later but with the orders set and the trade planned we just stick to the rules and don’t get caught up in the emotions. As you may or may not know, the result of the election saw the Conservative Party win more seats than any others but not enough to have a majority representation in the Houses of Parliament. This is known as a “Hung Parliament” scenario and is never a good thing. The Prime Minister, Theresa May, has managed to cling to power by forming a fragile alliance with the Northern Irish Democratic Unionist Party to get her majority, but it has really shaken political confidence across the markets as a result. No big surprises therefore, when the British Pound sold off sharply in reaction to the news. Interestingly though, look where the sell-off originated from: 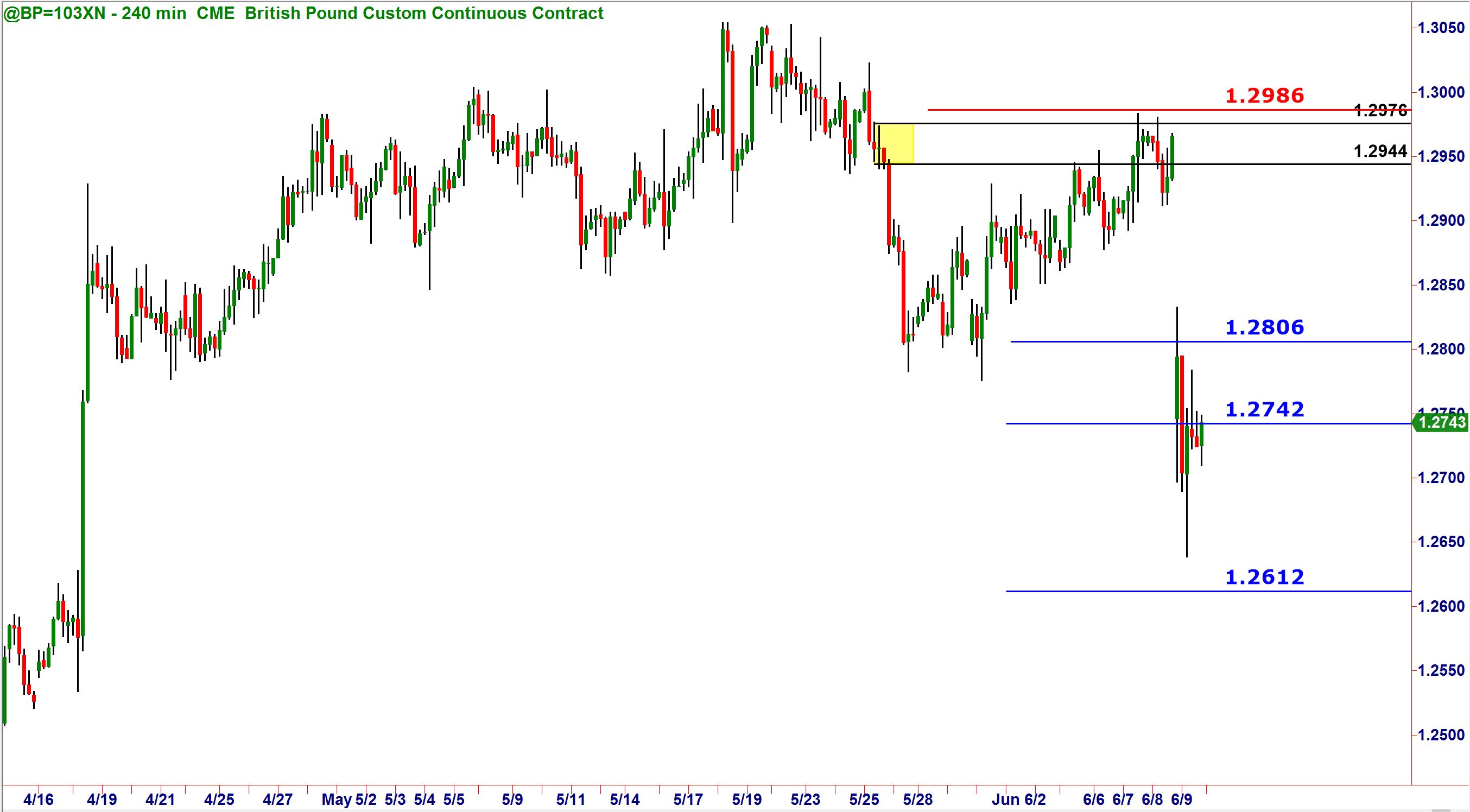 Notice how the downside move started from our supply zone we marked off 1 week prior to the election? Our students were already in short, before the bad news where most would have been selling afterwards. All this was simply achieved by following the footprints of the banks as our primary decision-making tool, not second-hand news. You will also see why it is important to factor in a decent buffer for our stop loss order too (which should also be rules-based) otherwise trade would have taken us out painfully, only to see the market drop in our direction.

So, the lesson of the day: don’t let the news be your primary decision-making tool. Don’t worry about what you may hear or read as it will always influence your choices and, more importantly, will be far too late to the game. The last thing you want to do is chase the action when you should be letting it come directly to you. I hope you found this useful.