Price moves in trends. Trends can be extremely short-term, down to the tick level, or month-long steady climbs (or falls) in a stock’s value. The tools we use to predict or detect these trends are as varied as the time frames on which they appear. As you would expect, some tools are more appropriate for certain time frames than others.

Trendlines are one of the simpler tools. These basic lines, drawn roughly along price lows to indicate support in uptrends or along price highs to indicate resistance in downtrends, identify general market price direction. They provide excellent guidance during clean and persistent price trends.

However, such qualities are not always in place. Often, trends play out in fits and starts, surging ahead only to give back several points before resuming the move in the predominant direction. For these moves, it is more difficult to see where price is headed. We need to turn to a tool that is more sensitive to price changes that are inconsistent over time.

The commodity channel index (CCI) is an oscillator designed to be effective in these environments. Don’t be confused by the use of the word “commodity” in the name. This oscillator, popularized by Donald Lambert, works perfectly well on stocks. It measures the variation of a security’s price from its statistical mean. This variation can hold clues to a change in price trend.

Lambert’s basic assumption is that tradable assets, such as stocks and commodities, move in cycles. CCI helps by indicating when an asset has moved too far above its mean for the trend to sustain (overbought condition), or has become too cheap for sellers to maintain necessary selling pressure (oversold condition). These levels can, in turn, be used to generate buy and sell signals against the recent move.

There are four steps in the calculation of the CCI:

2. Calculate the n-period simple moving average of the typical price (SMATP). Traders generally use a 20-period SMA because on average there are 20 trading days in a month.

There are three basic applications of the CCI indicator in trading:


We’ll discuss each of the above methods in detail, elaborating with examples.

Trading with the CCI

One of the simplest applications of the CCI is a zero-line crossover. As the CCI generally varies within the +100 to –100 range, any move above +100 or below –100 shows an unexceptional strength or weakness that can extend itself further. The zero-line is precisely in the middle of these extremes. Traders use the zero-line cross as a potential entry point under the assumption that trend bias has shifted from negative to positive, or vice versa, and is headed toward one of the extremes.

A word of caution, however. Actively trading on every zero-line crossover can result in numerous whipsaws, particularly if the stock is currently range bound. As long as we are prepared to accept that risk, the following are some basic, unfiltered trade rules for a zero-line crossover: 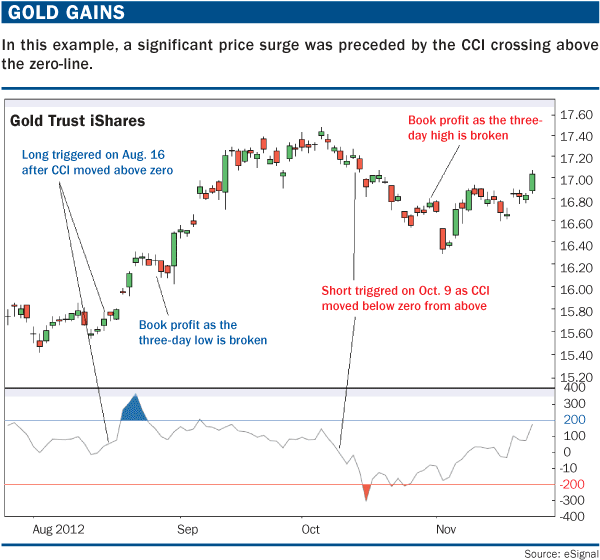 The CCI technically has no high or low limit as per the traditional calculation.
Markets can remain overbought or oversold for extended periods of time.

Regarding the level to use, typically +100 and –100 work when trading a stock in a trading range, while higher levels, such as +200 and –200, are necessary during trending moves.

Using overbought/oversold levels effectively also depends on the volatility of the underlying security. For example, the CCI range for ETFs generally is lower when compared to individual stocks such as Apple and Google. Here are some trading rules for overbought/oversold readings during a trending market: 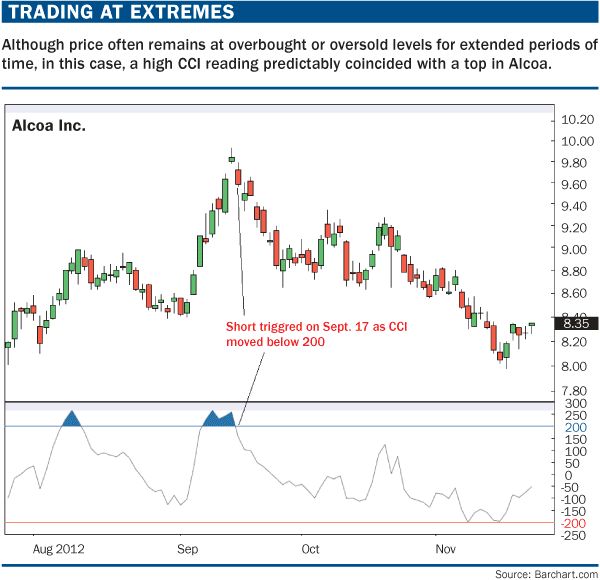 Divergence occurs when the security’s price makes a new high while the CCI fails to surpass its previous high. Divergences probably are the least common of the three signals, but usually are the most reliable and lead to the biggest moves. There are two types of divergences:

“CCI divergence” (below) shows Google Inc. (GOOG) with a 20-day CCI on the daily time frame. On Sept. 7, 2012, Google closed at $712.25 and the CCI at 265.68. After Sept. 7, Google continued its rise and made a high of $774.68 on Oct. 5, but the CCI was at 107.88, showing a significant negative divergence with price making a higher-high and the CCI indicator making a lower-low. Negative divergence demonstrated its value on Oct. 18 when Google broke the price support of $740 and went into a freefall mode after results were declared that fell short of market expectations. 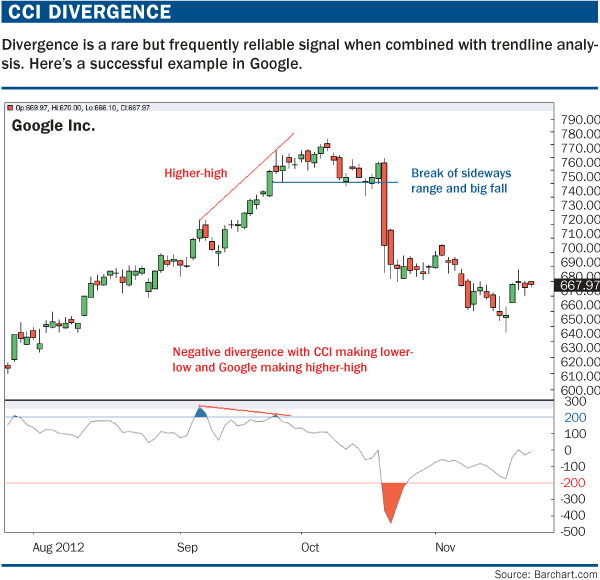 Price moves in trends, and while traditional price chart tools such as trendlines and moving averages can signal important shifts in sentiment, more sophisticated indicators are useful across varying conditions. The CCI is one such tool. It offers multiple ways to analyze price movements, and it works well with confirming indicators, such as trendlines, to forecast major moves.

USD/JPY holds onto the latest bullish bias while picking up bids to refresh the intraday high near 134.40 as Tokyo opens on Wednesday. The yen pair’s latest run-up could be linked to the firmer yields.The quote ignores the US dollar pullback while trying to justify the mixed data at home and abroad.

Gold price consolidates weekly losses around $1,778 amid broad US dollar weakness heading into Wednesday’s European session. In doing so, the XAU/USD traders also portray the cautious mood of the FOMC meeting minutes.