Dogecoin price staged a notable 90% rebound from June 22 to June 25. It was a welcome change from the weakness that defined price through much of May and June. However, since June 25, DOGE has not translated the initial bounce into a sustainable rally, reaching the 50-day simple moving average (SMA) or higher. In reality, the meme token broke below the lower trend line of the minor symmetrical triangle pattern plotted since June 25.

Dogecoin price may recover, but three factors combine to raise doubts about the outlook for DOGE, including the overwhelming resistance of the May trend line, the lower closes on the weekly chart and the high correlation with the indecisive Bitcoin.

A valuable tool to evaluate whether a trend remains active is using trend lines through key highs or lows of the prominent trend. In the case of Dogecoin price, the May trend line beginning at the May 8 high and running through the June highs has become stiff resistance for DOGE.

On June 25, the rebound from the tactically important 200-day SMA at $0.150 was impeded by the declining trend line, and Dogecoin price soon reversed the gains to close down 10% on the day. Furthermore, over the last eight trading days, DOGE has tagged the May trend line or reversed gains to close on or below, fortifying the technical presence of the downtrend initiated on May 8.

Taking into account the fruitless attempts to overcome the trend line’s resistance, investors face a cautionary environment. It raises the probability that Dogecoin price may revisit the June 22 low at $0.152 moving forward unless a significant catalyst transforms the current price structure. 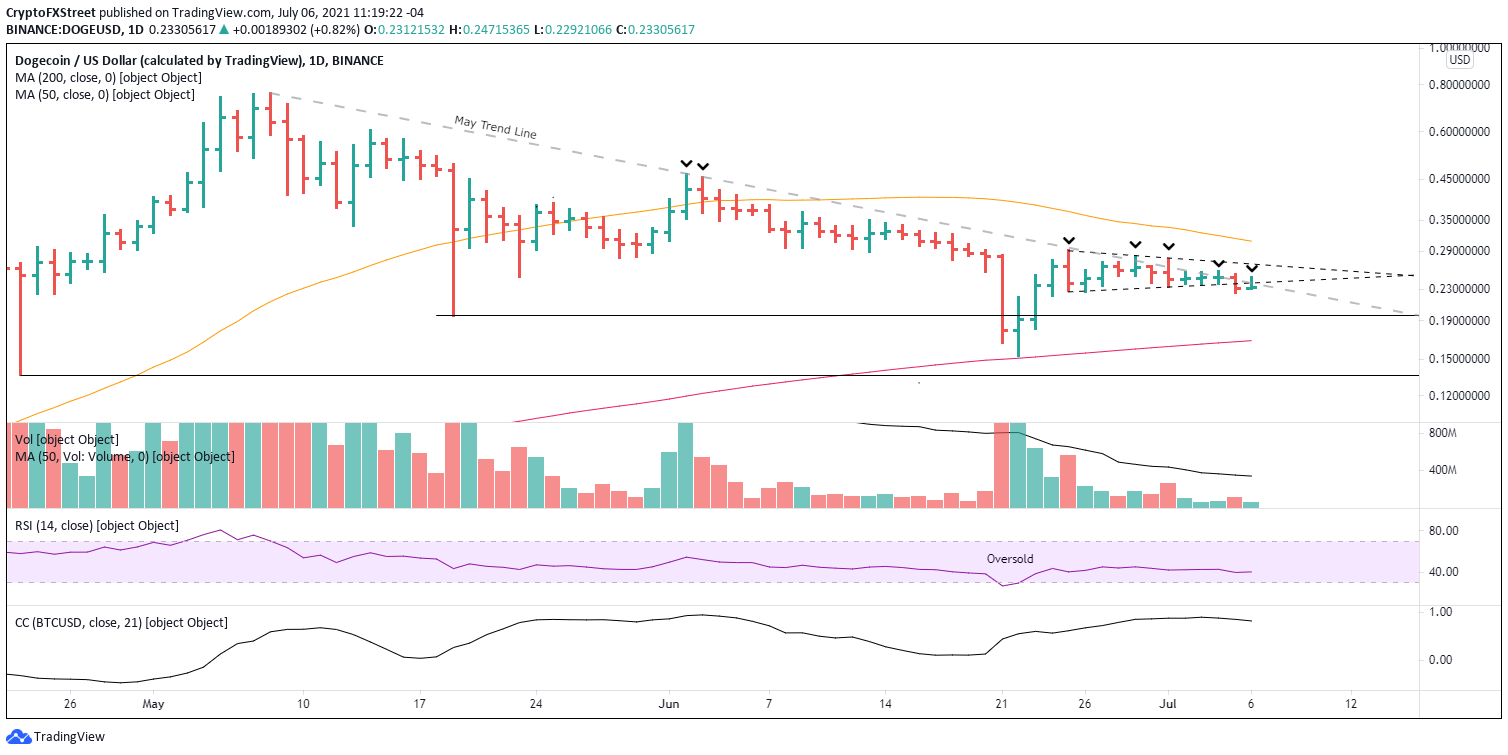 The weekly chart is fundamental to gauging whether a trend has been exhausted for many prominent investors and institutions. Critical to the analysis is where the weekly close is relative to the surrounding price structure.

The weekly close smoothes out the day-to-day vibrations and gives a better reading on the sentiment of bigger investors. In the case of Dogecoin price, the digital asset closed last week at $0.246, marking the lowest weekly close since the downtrend began and the lowest level since mid-April, suggesting that DOGE investors remain noncommittal and have used the recent bounce from June 22 to June 25 to lighten positions.

This week Dogecoin price is building on last week’s bearish close, increasing the pressure on any preexisting bullish narrative and delivering another cautionary signal to DOGE investors. 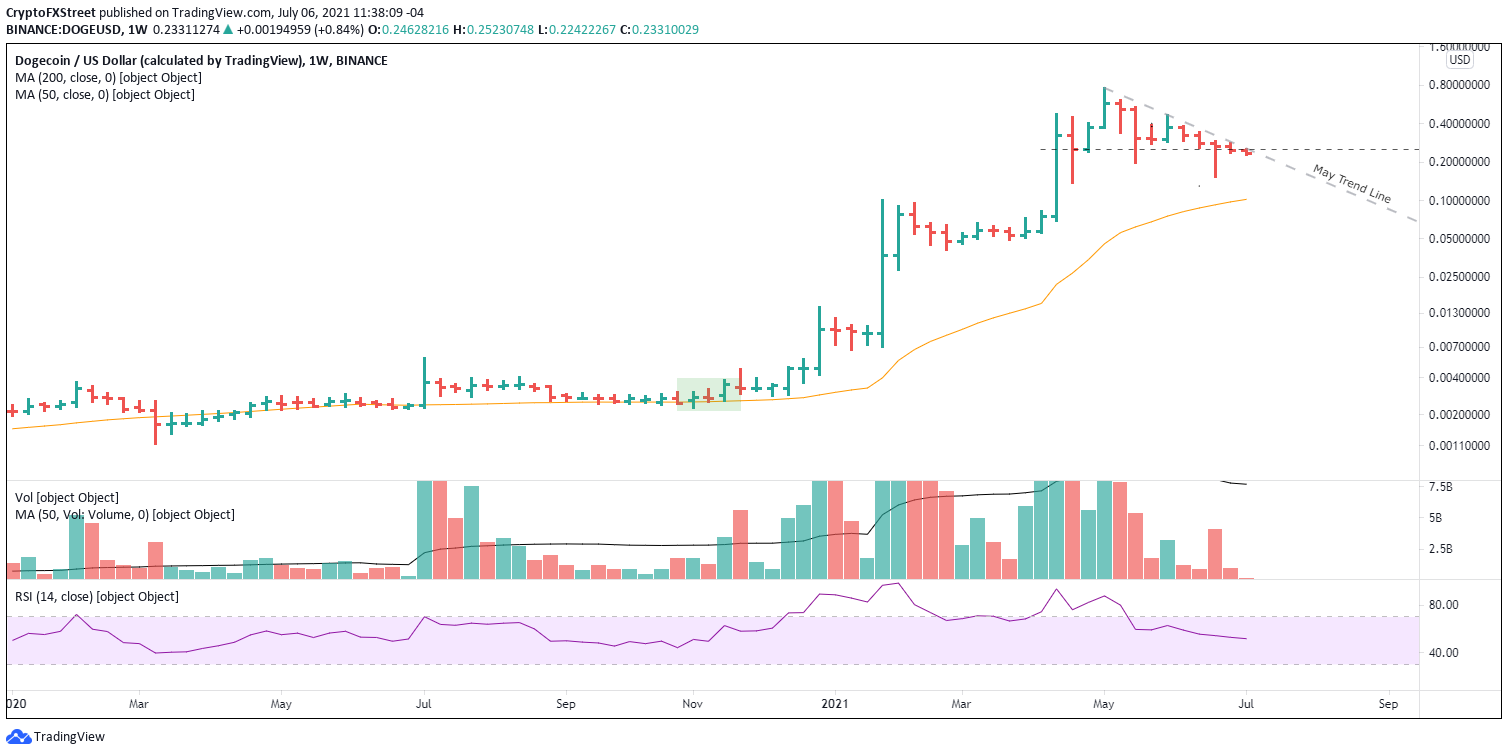 A final headwind challenging Dogecoin price is the tight correlation with Bitcoin as the Correlation Coefficient is running at .80 with the pioneer cryptocurrency. The close correlation indicates that DOGE is now greatly influenced by Bitcoin price action, which has been directionless since May 19.

With a neutral to negative price structure for Bitcoin and the tight correlation, it is challenging to contend that Dogecoin price will decouple in the short term, presenting the potential for further DOGE weakness.

Of course, it has been frequently shown on different timeframes that social media can profoundly impact Dogecoin price, and it cannot be ruled out. Nevertheless, with all things being equal, the lackluster Bitcoin price action will be a headwind.

Few cryptocurrencies have been as entertaining and profitable as DOGE in 2021. Still, like all digital assets, it is also governed by technical realities and influenced to some extent by the price authority of Bitcoin. As a result, Dogecoin price aspirations of turning the June 22-25 rebound into a sustainable rally narrative are being questioned by the three realities illuminated above.

The potential outcome of the situation is a decline to the June 22 low of $0.152, representing a 35% decline from the current price. The drop would best the support offered by the May 19 low of $0.195 and the 200-day SMA at $0.168, and reset the outlook for Dogecoin price for the foreseeable future.