Tron (TRX) price has its traders reliving Woodstock ‘99 as markets are thrown left and right by  central banks, geopolitical risks and a very nervous election on Sunday in Italy. With the price action starting to sell-off on Wednesday, traders experienced a ‘Korn effect.’ The band performed on Friday at the Woodstock ‘99 event, when there were already some tensions and a few mosh pits –  traders got similarly injured, leading to a break below the monthly support level S1 at $0.058. Thursday saw a bit of relief as the Swiss franc fell substantially and eased markets a bit, opening up some relief for Tron price action, much as Bush did at Woodstock on the closing night.

Tron price this morning, however, is very nervous and moving very unpredictably as the past 48 hours have worn out plenty of traders. Taking the stage this morning was the UK Chancellor coming out with an emergency budget to support the UK. It was like the performance of Limp Bizkit on Saturday, taking down the sound tower. Sterling trembled in its foundation and underwent a meltdown not seen since 1992, with traders putting large positions short on sterling, and this spilling over into dollar strength. This had the effect of throwing TRX price up and down between the red descending trend line and the supportive low at $0.059 from September 07, 2022.

TRX price enters the evening and nears the last day of the Woodstock festival as riots are about to break out and put the whole festival literally on fire as the Red Hot Chili Peppers did back in 1999. This time it will be the Italian election that will be the closing headliner of this week with a victory in the polls on Sunday expected for the Far Right party. If so, the result may be followed by a  earthquake drop towards $0.054 or even $0.052 over the weekend as the dollar strength will awaken ferocious on Monday morning after the confirmed election results in favour of the Far Right. 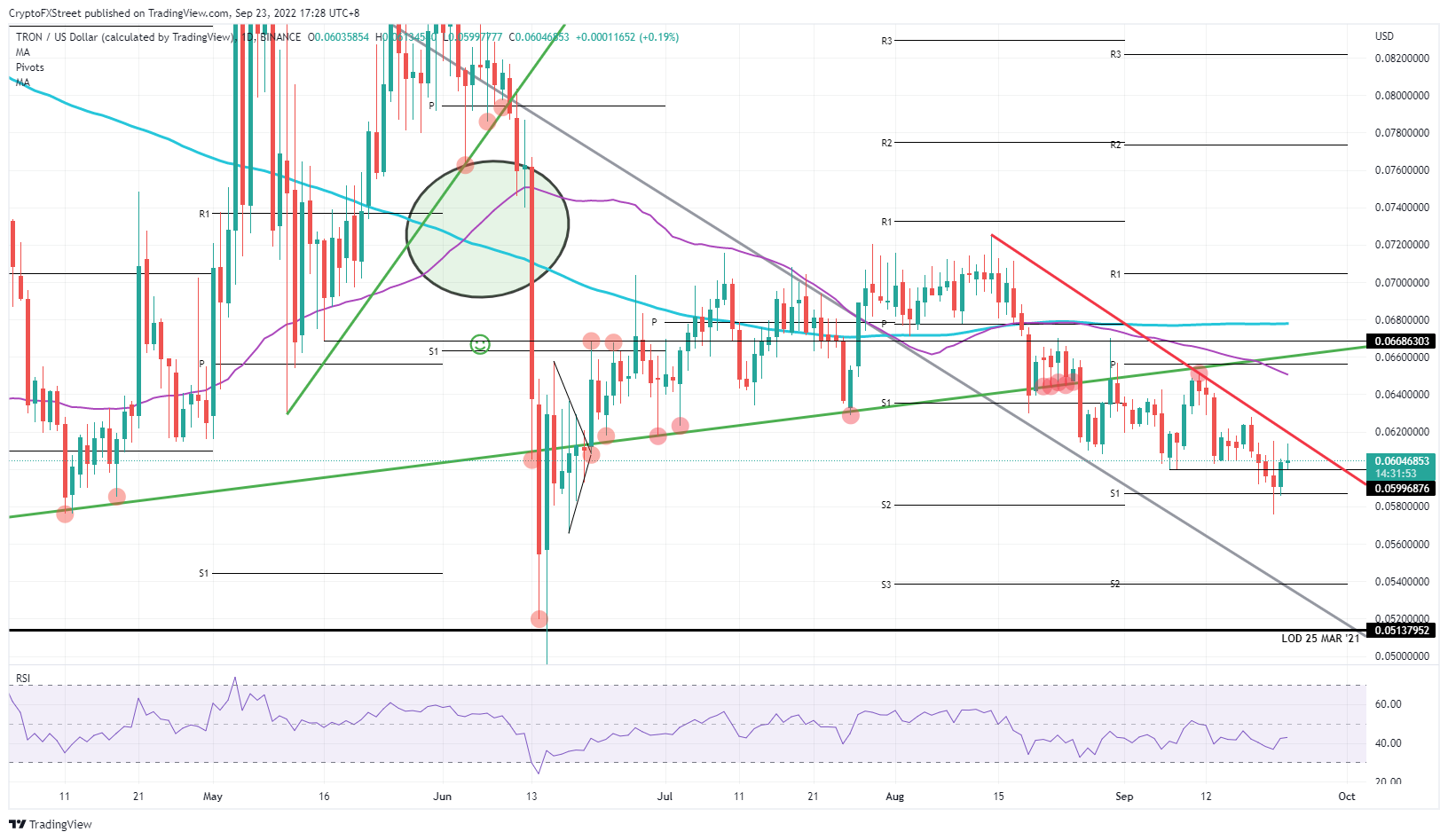 The one element that could come in and silence the angry mob, taking some wind out of the dollar strength, could come from Powell later this evening. His comments could trigger some profit taking in the stronger dollar and see Tron price possibly break above the red descending trend line, leaving it in a much better position to face the Italian elections over the weekend. To the upside, $0.064 looks like a good profit area for the rally, with the 55-day Simple Moving Average a few cents above.