Bitcoin price has developed one of the most obvious head-and-shoulders patterns on its daily chart, generating many new short positions before confirmation of the pattern is complete. Likewise, Ethereum price has seen many new short positions generated after dropping below its bull flag. XRP price action is playing catchup with BTC and ETH as buyers begin to trickle in.

Bitcoin price action has certainly been on the downswing of late. Since last week's open, Bitcoin has dropped more than 20%. Fear is the emotion affecting most retail traders.

However, the drop for Bitcoin has been almost textbook in its positioning and timing. Little follow-through selling occurred as Bitcoin price dropped below the December 10 flash-crash low. A short squeeze setup has developed on the $1,000/3-box reversal Point and Figure chart.

The hypothetical long entry is a buy stop order at the 3-box reversal, currently at $45,000 with a stop loss at $41,000 and a profit target at $60,000. The trade idea represents a 3.75:1 reward/risk setup with an implied profit target of nearly 35% from the entry. A two-box trailing stop would help protect any profit made post entry.

There is no invalidation point for the hypothetical long entry. If Bitcoin price moves lower, the entry and stop-loss follow in tandem, but the profit target at $60,000 remains the same.

Ethereum price, like Bitcoin, has generated conditions where many short sellers have entered into the market convinced of a new bear market. The trap was too sweet for many bears to resist, but those who took the bait will likely feel some immense pressure over the next week.

There is a theoretical long entry for Ethereum on its $100/3-box reversal Point and Figure chart. The long setup is a buy stop order at $3,500, a stop loss at $3,100, and a profit target at $5,500. The theoretical long trade is a 5:1 reward/risk setup with a projected profit target of over 60% from the entry. A three-box trailing stop would help protect any profit generated after hitting the entry.

As with Bitcoin, there is no invalidation point for Ethereum price within its theoretical long setup. If Ethereum moves lower, the buy stop and stop loss move with the lower price action, but the profit target remains the same.

XRP price anticipates a return to the $1.00 value area

XRP price has found buyers to maintain a level above $0.75. Understandably, many bulls remain on the sidelines. Given the current position XRP is at within the Ichimoku Kinko Hyo system, it's no wonder why buyers are tepid about accumulating.

XRP price action technically fulfilled all requirements for an Ideal Bearish Ichimoku Breakout set up two days ago. Sellers have made several attempts to begin a capitulation move, but passive buyers have halted such movement. 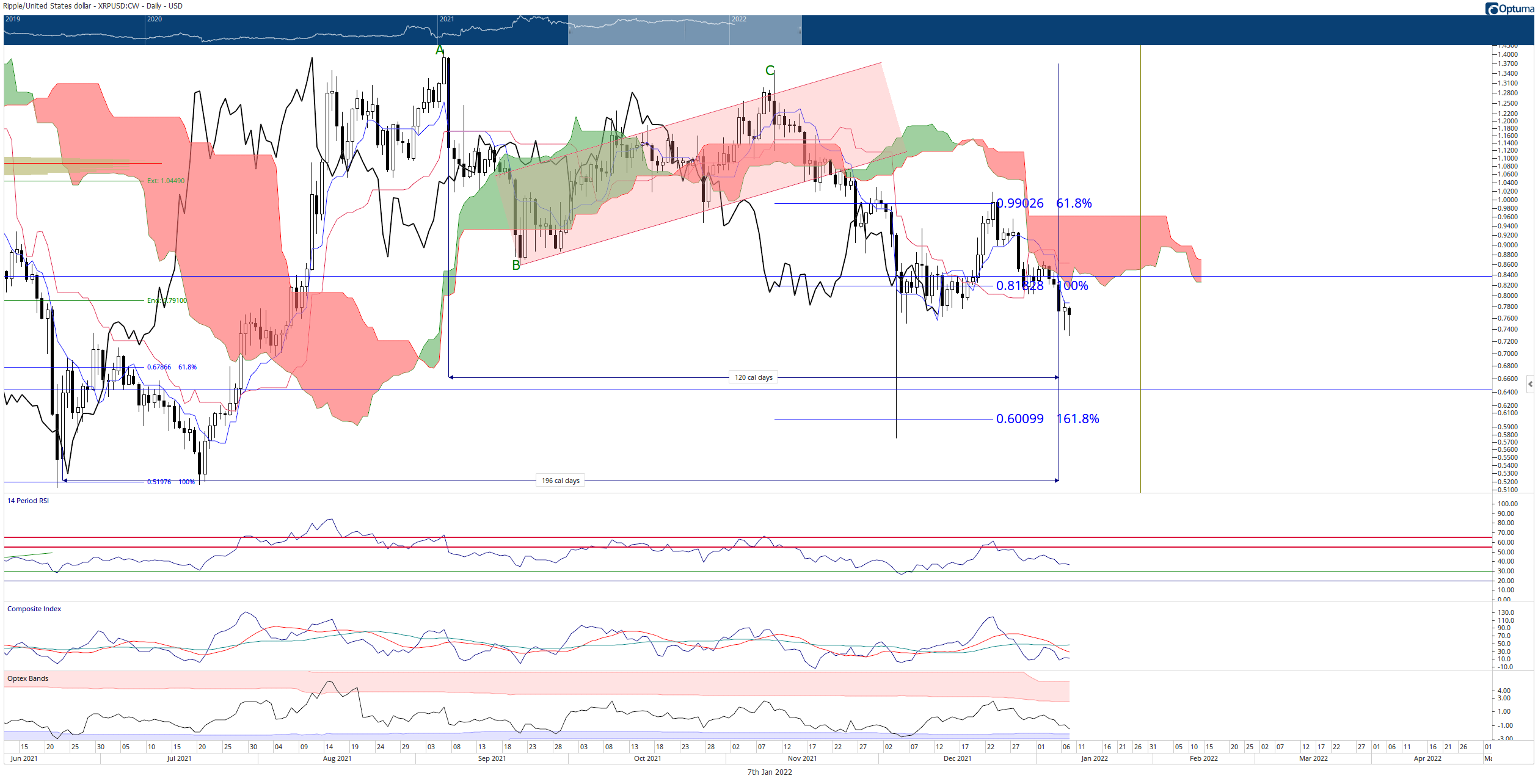 Many bulls on the sidelines likely want to wait until the $0.82 level is reached before opening new XRP long positions. $0.82 would put XRP price above the Tenkan-Sen, Senkou Span A, and the 38.2% Fibonacci retracement. Bulls may find an entry with that support structure below as less risky than the wide-open space below $0.75.

More conservative buyers are likely waiting for a break above the top of the Cloud (Senkou Span B) to confirm a move to $1.00.