It has apparently a mixed start for the cryptocurrency market, as the prices of BTC have been trading sideways between the USD6600 area and USD7200 levels over the weekend without significant breakthroughs.

At the time that bitcoin block reward halving is expected to happen in less than 40 days, the short-term sentiment over the leading crypto remained relatively low, despite the recent market recovery. Sentix Bitcoin Strategic Bias, which gauges six-month expectations of BTC investors, rebounded sharply last week. However, Manfred Hubner, Managing Director at Sentix, pointed out that, “the Overconfidence Index (not shown here) has been trading at +5, which is more in a zone that speaks for too much self-confidence on the part of investors. So, there is no clear positive indication for rising bitcoin prices.” 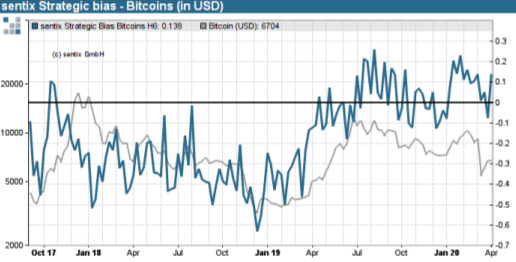 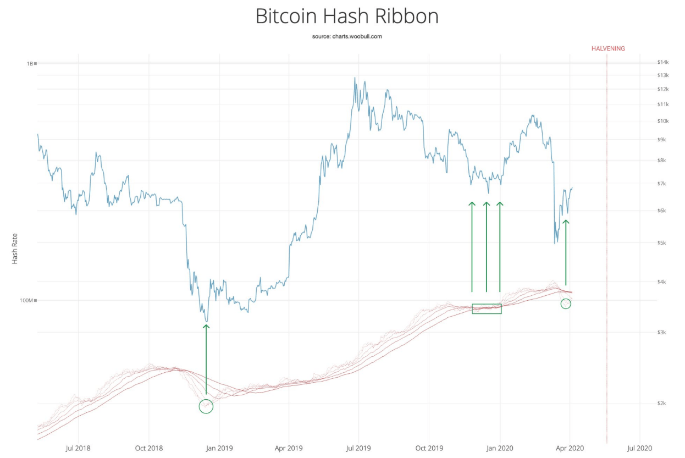 Even so, fundamentals seem to suggest that BTC prices may have bottomed. Prominent bitcoin analyst Willy Woo tweeted that, the recent collapse of the Hash Ribbons indicated some miner capitulations happened during the March 12 market crash, and he believes that miners won’t be adding more sell pressure from here.

Elsewhere, it has been a mixed bag, with BSV traded about 1% lower, while TRX gained more than 7%. MKR remained in focus, as Maker Foundation is set to be dissolved in order to go fully decentralized, the move is part of the efforts of creating a self-sustaining MakerDAO. MRK traded 7% lowered in Asia Monday.

BCH watchers also don’t want to miss the block reward halving, which is expected to take place on April 8. BCH miners’ reward will go from 12.5 BCH to 6.25 BCH per block. BCH traded half of a percent lower in the Monday session.

BTCUSD has been recovering from the March 12 selloff, and it seems approaching the 61.8% Fibonacci Retracement, where it’s close to the neckline of the previous neck and shoulders pattern.

Momentum-wise, it has been kind of mixed, but the bias seems slightly toward the positive side, with the RSI has been creating some higher highs, while the UO has been producing some lower highs. However, a small breakout in the OBV seems in the making, if confirmed, it could increase the likelihood of the bullish case.

It's worth noting that a small golden cross is also in the making, with the 100-MA slightly above the 200-MA.

Although the retest of the 61.8% FR is likely in the near-term, however, we believe the neckline resistance near USD7200 to 7300 could still be healthy.

ETHUSD – a breakout is expected

ETHUSD has formed an ascending triangle pattern, and a breakout in the short-term seems imminent. The squeeze of the Bollinger Bands also indicates the price volatility is expected to be increased.

The RSI and the OBV both produced positive breakouts, suggesting the buying momentum of the pair has been increasing, which strengthened the case of having a decisive breakout of the price.

The first level to watch could be the 200-MA at around 172, while the lower support near 120 is another key area.

ATOMUSDT – a new trend in development?

ATOMUSDT has initially jumped above the Feb-March trendline resistance with strong momentum, as the RSI has produced a clear breakout.

While the price may be standing above the trendline, the Bollinger Bands squeeze suggests that the price volatility could increase from here.

The initial reversal of the OBV suggests that the buying momentum has picked up, a further increase of the upside momentum could allow the price to start a new medium-term trend from this point.

Yesterday at 14:45 GMT, the BTC/USD pair plummeted 7.96% in just 5 minutes, dragging with it the rest of the crypto board and causing a juicy change of hands between the fearful and the convinced.

XRP/USD is back inside the previous range, bulls defend $0.2000

Ripple (XRP) is changing hands at $0.2030. The coin has partially recovered from Tuesday’s major sell-off to $0.1970; however, the further upside seems to be limited. Ripple retreated to the fourth place in the global cryptocurrency market rating and gave way to Tether (USDT).

ETH/USD bears stayed in control for the second straight day as the price fell from $237.65 to $237.15. The price has support at the upward trending line as it continues to trend inside the pennant formation and the 20-day ...

Cardano outperformed most cryptocurrencies in the market last week. In fact, ADA more than doubled its value in less than a week. On the upside, ADA/USD has traded new yearly highs at ...