Bitcoin stabilized around $29,600 at press time Tuesday after breaking below the important $30,000 level on Monday. The world’s largest cryptocurrency has been in a downtrend trend since failing to hold an all-time high around $63,000 in April. Concerns about regulatory risks, less accommodative monetary policy and fading institutional demand have contributed to selling pressure over the past few months.

Edward Moya, analyst at the foreign exchange brokerage firm Oanda, described bitcoin’s trading environment as a “tug of war between bears and bulls,” in an email to CoinDesk.

“Bitcoin’s longer-term bullish outlook depends on some mainstream adoption across the U.S. and Europe, and for some that appears to be at risk,” wrote Moya.

The European Union Commission is proposing a revamp of anti-money laundering rules, which could include banning anonymous crypto asset wallets. That did not help market sentiment on Tuesday, according to Moya.

“We see that at the federal and state levels, the falling price of bitcoin and resulting financial losses for many retail investors will only focus more regulatory scrutiny on this market,” wrote Timothy Butler, partner at Troutman Pepper, in an email to CoinDesk.

Aside from regulatory uncertainty, traders will also be alert for comments from Tesla CEO Elon Musk, who is scheduled to speak at The B Word conference on Wednesday. Musk’s appearance is especially timely given the potential for bitcoin to drop towards $25,000, which would mean Tesla could suffer a $300 million hit to its earnings, according to Shawn Tully, a senior editor at Fortune.

“Continued pressure at these levels could see continuation to the downside,” wrote Nathan Cox, chief investment officer at digital asset investment firm Two Prime, in an email to CoinDesk. 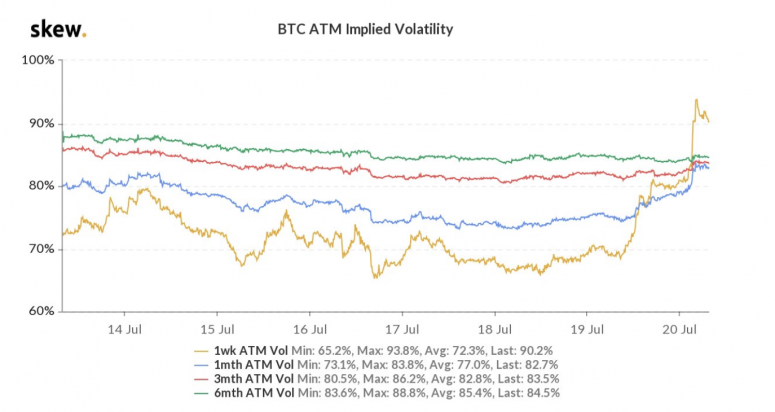 Bitcoin futures on the Chicago Mercantile Exchange (CME) have shifted into “backwardation,” which is when futures trade at a discount to the spot price. This is the second time that regulated futures on the CME are trading at backwardation in the last seven days, according to a Tuesday report by Arcane Research.

“Institutional investors seem very cautious at the moment, and in general seem to be in the process of de-risking,” Arcane wrote.

“The declining trend in the futures market indicates that fear is accumulating as long as traders are no longer willing to pay a premium for their exposure.” 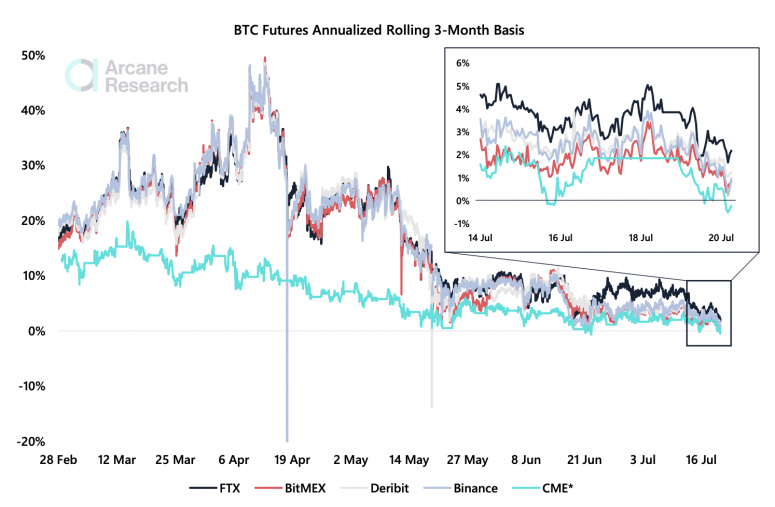 Bitcoin’s drawdown, or the percentage decline from the April peak around $63,000, is roughly 50%. Typically, drawdowns that exceed 50% can last for several months, similar to 2018 and the second-half of 2019.

Two decisive daily closes below $30,000 are needed to confirm a breakdown, wrote Katie Stockton, managing director of Fairlead Strategies, in an email to CoinDesk. For now, secondary support is at $27,000, which bitcoin will need to hold in order to maintain a long-term uptrend. 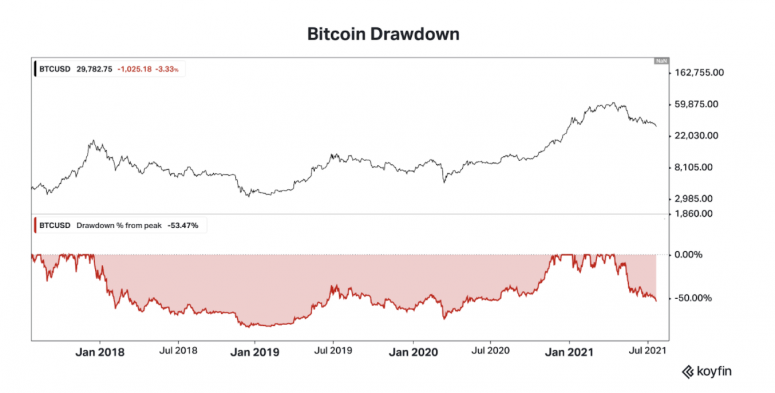 The Purpose Exchange-Traded Fund, one of the first approved bitcoin exchange-traded products (ETPs), has seen a slowdown in net inflows this week after experiencing a period of relatively strong demand in May and June, according to a report by Glassnode.

The slowdown suggests institutional demand for the largest currency by market cap remains weak across these regulated products, according to Glassnode. 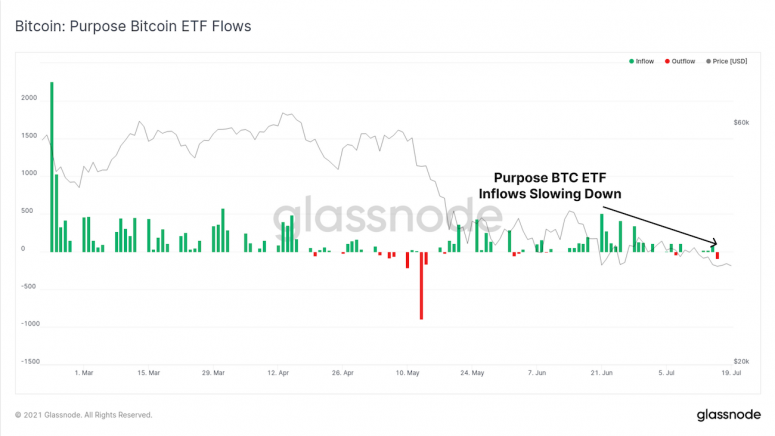 Where to from here

Among 42 cryptocurrency experts surveyed by Finder, 61% think that bitcoin is currently undervalued, while the experts on average expect bitcoin to reach $66,284 per BTC by the end of 2021.

“Adoption by corporations and institutional investors paired with a loose monetary policy and high asset inflation will propel bitcoin to six figures before the end of this year,” Morpher CEO Martin Fröehler, the most bullish among the panelists, told Finder.

University of Canberra senior lecturer John Hawkins, one of the most bearish panelists, said that government adoption of bitcoin will adversely affect the cryptocurrency’s price. “I’m assuming El Salvador adopting it as legal tender puts a floor for a while. But after the price has dropped a lot, they may remove the legal tender status.”

Most digital assets on CoinDesk 20 ended up lower on Tuesday. In fact, everything was in the red except for dollar-linked stablecoins.