Cardano price outperformed many altcoins in the last week of May. Perhaps, the volatility was due to the anticipation of the Vasil hard fork, regardless, the uptrend was real and as a result, ADA has produced a bullish pattern.

A breakout from this setup could result in serious gains, similar to the ones seen between May 27 and May 31. Retail investors are waiting with bated breath for the upgrade of the Vasil hard fork and the effects it brings to the ADA price.

Will Vasil hard fork live up to the expectations?

As explained in previous articles, the Vasil hard fork is scheduled for June 29 and is supposed to improve scaling by introducing pipelining that will improve block diffusion.

While scaling is one of the improvements, other facets that will notice significant upgrades are the Plutus smart contract language for dApp developers and reducing the latency of block transmission.

The last major upgrade for Cardano was the Alonzo hard fork, which was deployed on September 12, 2021. While this update added smart contract functionality, which was a watershed moment, the price did not react optimistically.

In fact, it was the opposite. Cardano price dropped 25% in a month and 85% in roughly eight months since the upgrade. So one could say, the news of the Alonzo upgrade was already priced in. From September 2020 to September 2021, ADA rallied 2,500% and hit a new all-time high at $3.1.

So, if history were to repeat itself, there could be another drop in Cardano price. However, considering the market crash that has been happening for nearly a year, a massive sell-off seems unlikely despite the bearish macro conditions.

A minor rally seems on the cards for ADA and the Vasil hard fork scheduled for June 29 could be the catalyst that may send ADA flying.

Cardano price ready for a move

Cardano price is forming a cup and handle pattern on the daily time frame, suggesting the possibility of a bullish breakout. While the crypto market is bearish, Bitcoin hints at a relief rally, indicating that the optimistic pattern formed on the daily chart makes sense.

This technical formation consists of a rounding bottom known as a cup whose swing highs are connected by a horizontal line to form a resistance barrier. This price action is followed by a tight consolidation that forms the handle.

The theoretical forecasts a 27% upswing, obtained by measuring the distance between the cup’s swing high to the right and the bottom. Adding this measure to the breakout point of the horizontal resistance at $0.628 reveals the target at $0.80. 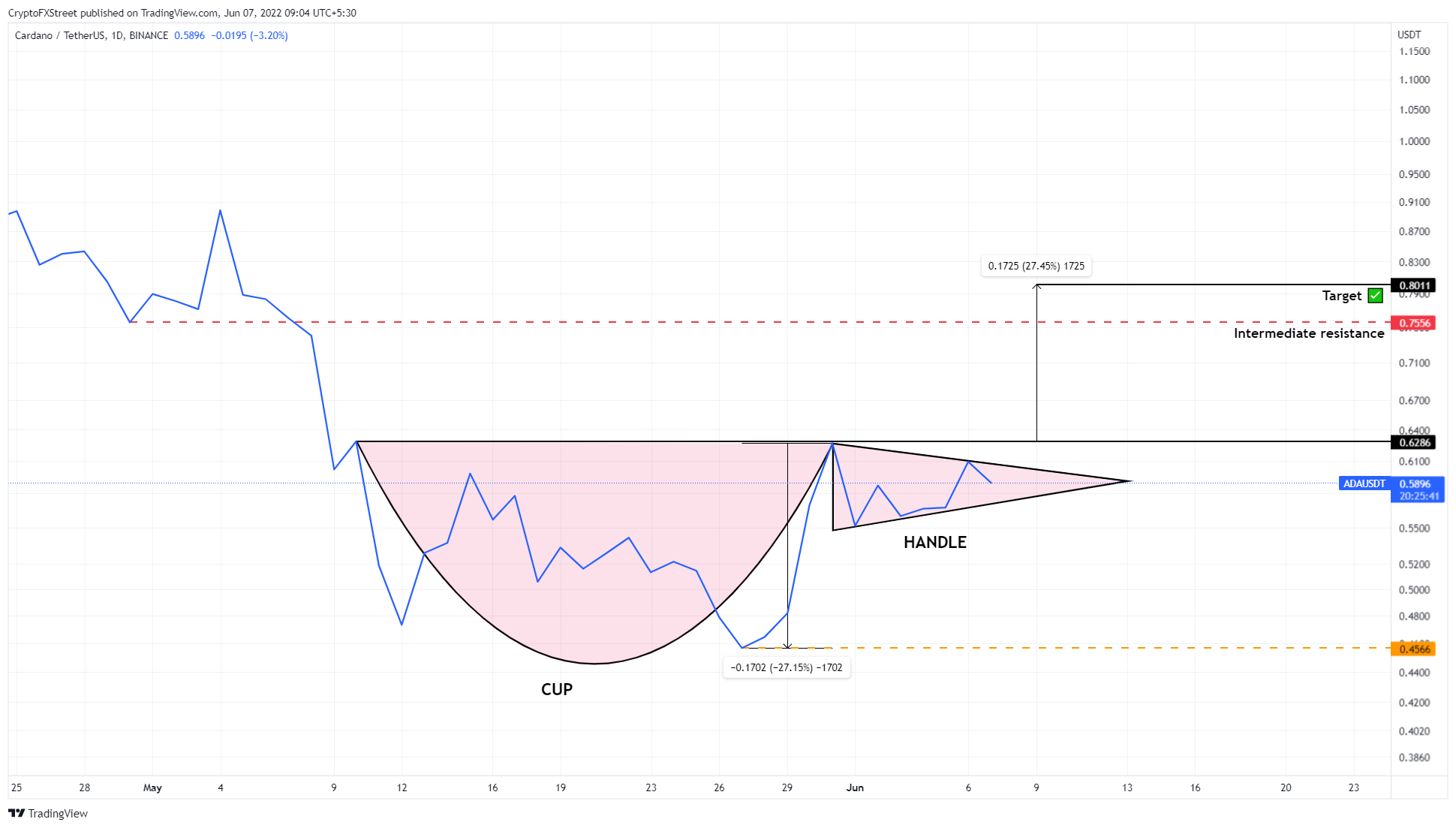 Either way, investors need to be cautious and wait for a confirmation of a bullish breakout above $0.628. Rejection around this level could hinder the upswing and even invalidate it. For an invalidation of the bullish thesis, Cardano price needs to produce a lower low below the $0.456 support level.