Bitcoin price is encountering some headwinds on the first day of the week and the month. The pressure comes after the largest cryptocurrency performed exceptionally well in July, with a 17% surge. Analysts are focusing on the factors that will likely secure BTC’s long-term bullish outlook.

Several factors contributed to the volatility in July, allowing Bitcoin to form bullish candles in both the weekly and monthly timeframes. The bear market rally started amid oversold conditions experienced on the back of June’s 40% losses.

Although fear gripped the market in the last week of the month due to the expected changes in interest rates, Bitcoin price spiked, topping $24,000. The FOMC meeting on Wednesday pushed the rate higher by 75 basis – a move that surprisingly ignited the rally from $20,712 to $24,649, although it came with a dovish twist after the Fed said future mega-hikes would be data-dependent.

A double-top pattern highlighted in the four-hour timeframe chart could start a sharp correction to $17,483. This is a reversal pattern formed after an extended move up. The peaks (tops) represent a challenging supply area to break. Traders can prepare to short Bitcoin price if it breaks below the neckline, providing confirmation of the pattern’s completion. In such a scenario, a 15.47% drop will likely occur, bringing BTC to $17,483. 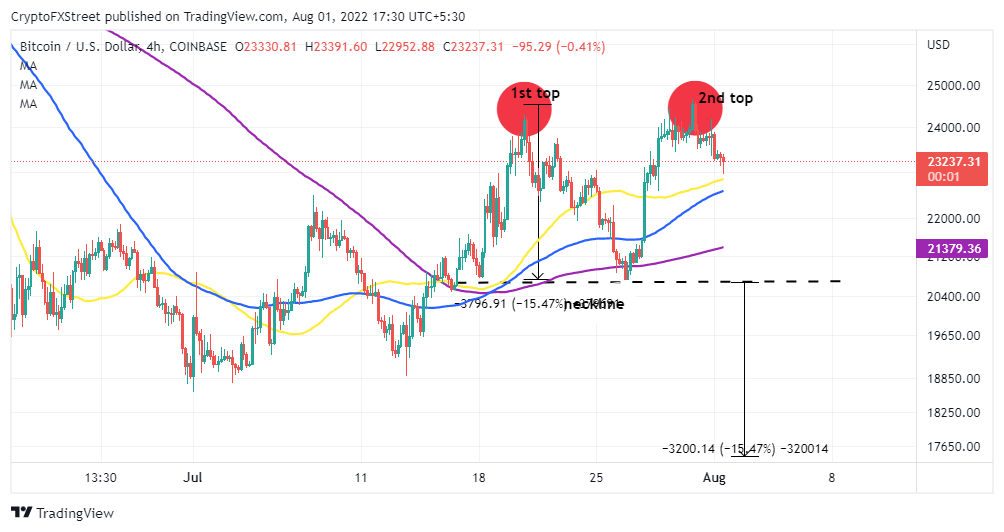 IntoTheBlock’s In/Out of the Money Around Price (IOMAP) reinforces the resistance highs, as illustrated by the double-top pattern above. The region between $23,122 and $23,793 represents approximately 672,000 addresses which previously scooped up about 513,000 BTC. Attempts to rise above this zone may be hampered or derailed by investors who wish to sell to recoup their capital at the breakeven point.

A consolidation period is expected if the above support holds. Moreover, a break and hold above higher support at $23,000 may invalidate the double-top pattern’s bearish outlook and guide Bitcoin’s price to $30,000.